Happiness in a Box 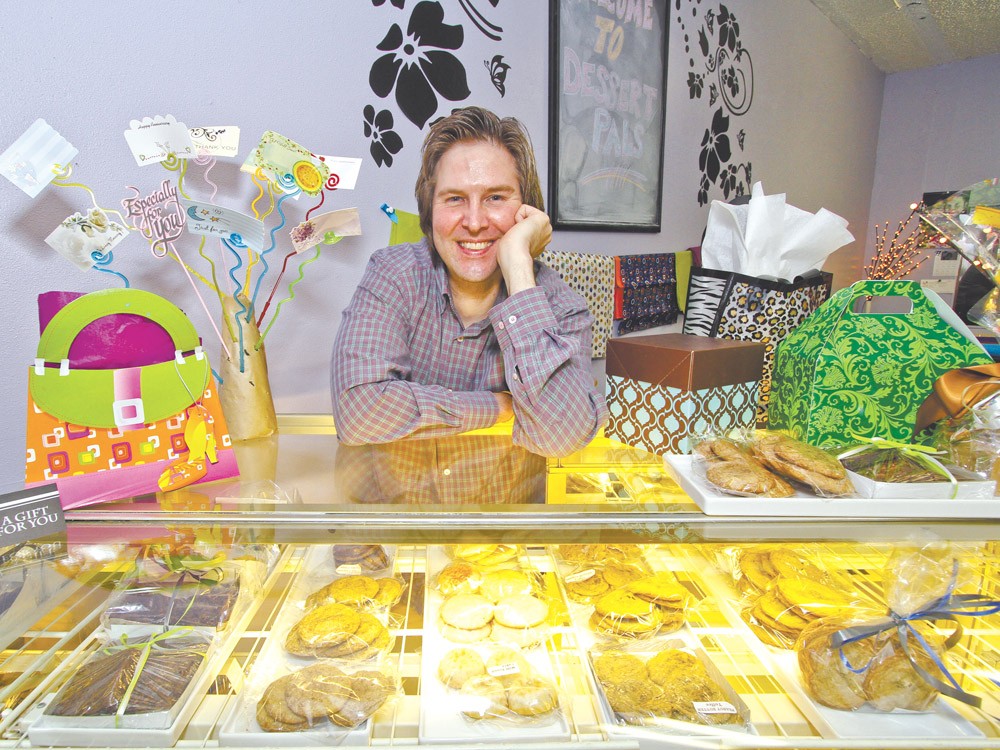 The 1996 movie Bed of Roses featured Christian Slater playing a flower delivery man who loved his job because he was able to bring happiness to people each day. Replace 1996 with 2012, Christian Slater with Scott and Melissa Meyers, and flowers with homemade-style desserts and you could have a movie called Box of Fudgy Brownies, wherein the Meyers are real-life people in love with their job of delivering happiness.

Dessert Pals opened in April of 2011, selling products from their storefront establishment on First Street in Cheney (shared with a frame/ gift-shop to keep overhead costs low) and also delivering baked goodness up the hill to homesick Eastern students. Parents from Seattle to Ohio and beyond log on to the bakery’s website and place orders for soft-batch snickerdoodles, chocolate chip, oatmeal, peanut butter and other jumbo-sized cookies (3 for $3) or cream-filled cookie sandwiches (3 for $3) brownies (4 for $5) and cupcakes like the cream-filled Mostess, which come in either red velvet or dark chocolate cinnamon (6 for $6.50).

These tasty treats have an emphasis on flavor, not bulk. Their soft-batch snickerdoodles do not skimp on vanilla or cinnamon. The brownies have a fudgy richness vaguely reminiscent of a flourless chocolate cake, while their cupcakes have the light, fresh taste of homemade baking. If you are a slightly less-than-honest person, you may be tempted to pass them off as your own.

Dessert Pals features a dessert club, daily deals and a smartphone app that offers coupons and updates on the menu of items that the Meyers deliver to an area that stretches from the West Plains to Spokane Valley.

Scott Meyers is planning for the future and considering opening a coffee shop alongside the baked goods and expanding the gift-box industry to a national level. But he hasn’t forgotten what made him and his wife start the bakery in the first place: making people happy.

Patron Tiffany Nixon, a fan of the chocolate peanut butter cupcake, liked Dessert Pals on Facebook and found herself the recipient of a free “You are Special” gift basket. She told Scott, “I was having a bad day and then I got a call from you.”

Eight years ago, the lot on University Road across from Rosauers was covered in weeds. People told Frank Alberti that he was crazy to set up a hot dog stand amid such desolation.

But the craziness paid off.

Frank’s Authentic New York Franks won Best Hot Dog in our Best of the Inland Northwest issue last month and placed third for Best Food Cart. Alberti was surprised — he has never advertised, having relied on word of mouth to drum up customers — and he’s grateful for the votes.

On a chilly, gray afternoon, a line of customers builds in front of his cart, which is topped with the signature blue-and-yellow umbrellas typically seen on New York City street corners. Frank steams some buns and tells a story.

He recalls a long-ago trip to Manhattan: “I was about four years old, and my grandfather told me he was going to treat us [Alberti and his brother] to the best hot dog in the world.”

The hot dog was a 100-percent Sabrett’s beef frank without fillers or extenders. The hot dogs are still made today and Alberti has them shipped to Spokane.

There really is no comparison to a boiled Sabrett’s. Its firm, natural casing gives way to a steam-filled beefy interior. The bun is chewy, the mustard spicy. Frank stands behind his cart and dishes out regular hot dogs ($2.50) or spicy, medium sweet sausages ($3.50) or a Big Frank, a quarter-pound of sausage that aficionados will recognize as knockwurst ($4.50).

Alberti only accepts cash, and the prices listed on the cart include the tax. A meal includes the sausage, a can of soda or bottle of water and a bag of chips. Nothing is more than six dollars and the condiments — sweet pickle relish, onions in sauce, beef chili sauce, melted cheddar, raw onions, sauerkraut, both spicy brown and bright yellow mustards and ketchup — are free of charge.

Alberti is happy to bring his favorite hot dogs to Spokane and to help others, like the young man who used to frequent the stand with his grandmother, create “special memories.”