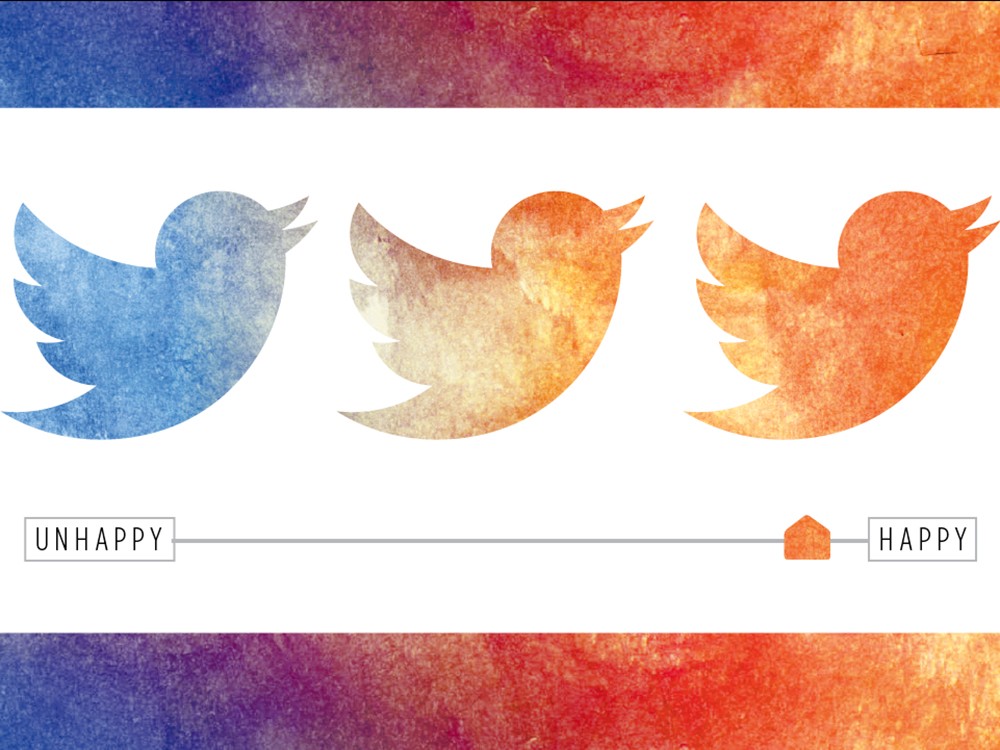 Earlier this year, a study from the University of Vermont concluded that Spokane is the happiest city in the Inland Northwest, and No. 11 in the nation. A flurry of tweets and media coverage revived the news in the past few weeks after the Huffington Post republished the data — Congresswoman Cathy McMorris Rodgers tweeted it, as did Gonzaga, Whitworth, Visit Spokane and dozens of proud Spokanites. KREM 2 did a full story about how happy we are: “While Washington ranked higher than other states, it is worth noting that Seattle didn’t score as high as Spokane.”

But is Spokane really all that happy? It’s possible — but this study doesn’t prove it. There are plenty of obvious limitations: Not everyone uses Twitter, and the study only included geotagged tweets. The study authors say they analyzed about 1 percent of all tweets in 2011.

It’s within those tweets that things start getting really absurd. The researchers assigned words “happy” or “sad” values based on a crowdsourced list from Amazon’s Mechanical Turk, then tallied up how often cities used those words. Basically, Spokane used “happy” words like “health,” “home,” “liberty” and “coffee” more often than average, and used “sad” words like “shit,” “don’t,” “no,” “ass,” “hell” and “ain’t” less often than average.

By design, the study takes words out of context. Every “no” is negative; every “lol” is positive. There is no accounting for phrases, sarcasm or regional differences in humor, as commenters in “unhappy” Southern states have pointed out.

The more intriguing question is not whether Spokane really is that happy, but why we so badly want to believe it. There are other ways of measuring cities’ happiness, like the poll-based Gallup-Healthways Well-Being Index, and Spokane typically comes out just on the better side of average. Why isn’t that good enough? Why do we want to believe that we’re not just happy, but happier than others?

The easy answer is Spokane’s famous inferiority complex, but the bigger problem is not unique to Spokane — by conflating happiness with positivity and making it a competition, the Internet has fostered an arms race of happiness. And all this inflated optimism might be bringing us down: Several studies in the past few years have found correlations between time spent on Facebook and feeling depressed. At least one other study has found no connection, but it doesn’t really matter what any of the studies say if you’ve ever once scrolled through photos and updates on social media, feeling lousy because it looks like everyone else is having so much more fun than you.

I got away from the Internet and walked through downtown Spokane and Riverfront Park, where children stomped in the fountain and men lay in the grass with hats pulled over their eyes. A group of office workers out smoking laughed over a piece of gossip; the man selling hot dogs at the corner of Howard and Riverside smiled, and I smiled back. You look pretty happy to me, Spokane, but it doesn’t really matter — I’d most like to believe it’s the kind of place where any one of us with happiness to spare will share when possible, and any one of us without enough will feel welcome to ask for help. You don’t need a study of tweets to know if that’s true.