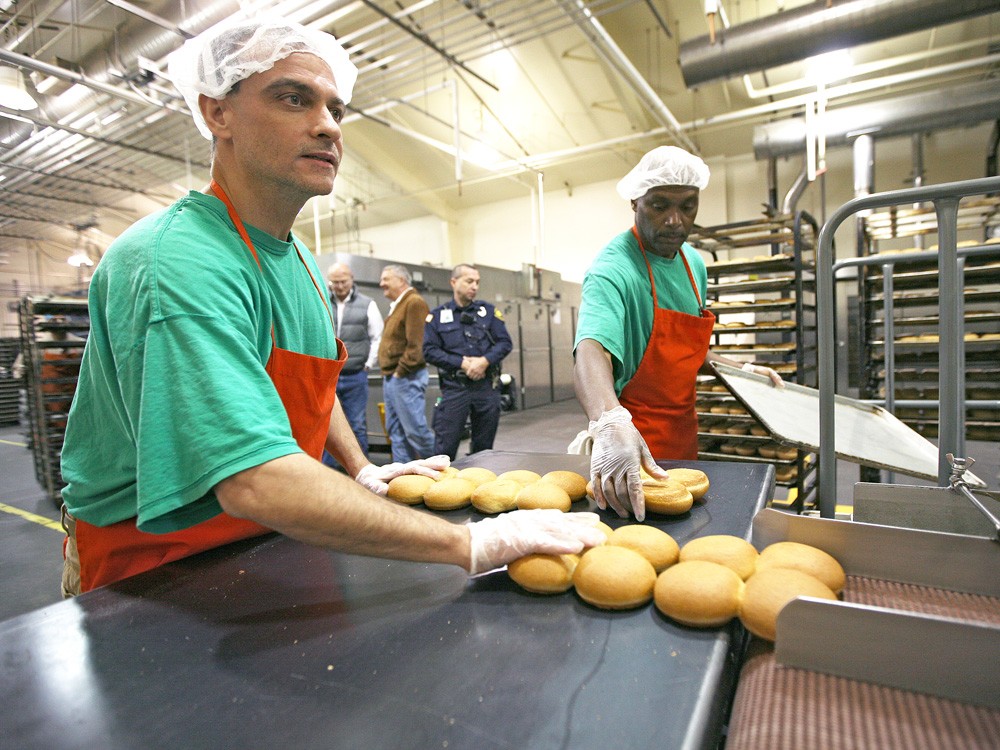 A group of men in little orange aprons and white hairnets is hacking away at a mound of butter-colored dough that’s the size of a grown cow. One by one, working like Keebler Elves, the bakers break the mound into 240 loaves of bread in just 15 minutes.

Operating 24 hours a day, five days a week, this bakery is large enough to house a small fleet of semitrailers. The men work in assembly lines and teams of five to six per station. At one station, a man feeds trays into a machine that drops a perfect dollop of chocolate-chip muffin batter into white-lined muffin tins.

This could be any busy bakery, but it’s not — these Keebler Elves are actually prisoners.

Inmates at some prisons make license plates. At the Airway Heights Corrections Center, they bake muffins. The medium-security prison operates a full-service bakery that serves every inmate in Washington state. Not only that, but their bread, muffins, hot dog buns and dinner rolls feed government agencies and children in Washington state school districts.

The inmates make everything from scratch. They mix, bake, sort, wrap, and test for weight, color, texture, and taste every product that gets eaten and shipped out of Airway Heights.

“We have 16,000 people incarcerated in Washington, which means 16,000-some breakfasts, lunches and dinners served,” says Lyle Morse, director of Washington State Correctional Industries, the job-training arm of the corrections department, “not to mention what we produce for schools and other industries.”

The bakery program is one of 35 businesses operated in correctional institutions in Washington. Begun in 1992 and recently expanded, the bakery employs 125 men per shift.

“It doesn’t matter who you are or who your daddy was,” Morse says. “In here, you all get a chance.”

Morse says most inmates come into the workforce programs with little to no job experience. While locked up, they have the opportunity to get an education, learn a trade, and work a mostly “normal” occupation.

Inmates volunteer for employment and work about six hours a day. They must pass application requirements and have or be working toward a GED. They’re paid $1.20-$1.60 per hour, before reductions (for things like legal services and child support).

“We’ve tried to create a system where people can see what they’re capable of and reward them for their accomplishments,” Morse says. “Studies have proven time and again that real-life work and real-life training in these institutions can reduce the likelihood of an offender re-offending.”

“What they’re doing at this facility is just impressive,” says Karl Kupers, who walks through the bakery alongside his business partner, Fred Fleming. The duo own Shepherd’s Grain, and this is their fifth time on the tour. The company approached the Airway Heights Corrections Center in 2009 with a business proposition.

“It was a little … difficult to get our foot through the door,” Kupers says. “You can’t exactly walk in here with a bag of flour over your shoulder.”

Today, Shepherd’s Grain supplies some of the flour used in the bakery. By pairing with the Department of Corrections and Food Services of America, Shepherd’s Grain is also able to serve their local products in Washington school districts — another market that is difficult to branch into, Kupers says.

“The whole genesis of Shepherd’s Grain is finding the opportunity to bring a sustainable regional food system through our flour programs,” Kupers says. “This bakery at Airway Heights is self-funded, uses local flour, and provides a positive social outcome.”

On the tour today, inmates use Shepherd’s Grain flour in brownies and in apple cinnamon, carrot, butterscotch, pumpkin, spice and chocolate-chip muffins.

This year, prisoners even started growing Shepherd’s Grain wheat. Inmates at the Washington State Penitentiary in Walla Walla planted 215 acres of wheat using no-till, environmentally friendly agricultural techniques. And in October, those same inmates planted 224 acres of winter wheat — most of which will be baked in Airway Heights.

“You have to think of sustainability as a three-leg system,” Kupers says. “You have to take into account the environment, economics and social components. The social component is the one that’s least understood, but it’s the most important. It’s the glue that keeps everything else together.”

Morse says the goal of workforce programs like the Airway Heights bakery is to produce items for Washington state and to make correctional facilities self-sustaining. Purchasing local products from the likes of Shepherd’s Grain completes that cycle of sustainability. But it’s not just about dinner rolls and pumpkin muffins.

“There are 16,000 people in prison, and 97 percent of them will be released,” Morse says. “How they come out into society is something that is a matter of public safety and public concern.

“In here, we can affect that outcome,” he adds. “That’s truly the product that we produce: people who are less likely to offend. We don’t exist to just make bread.”