Alpacas and horses and cows - oh my. 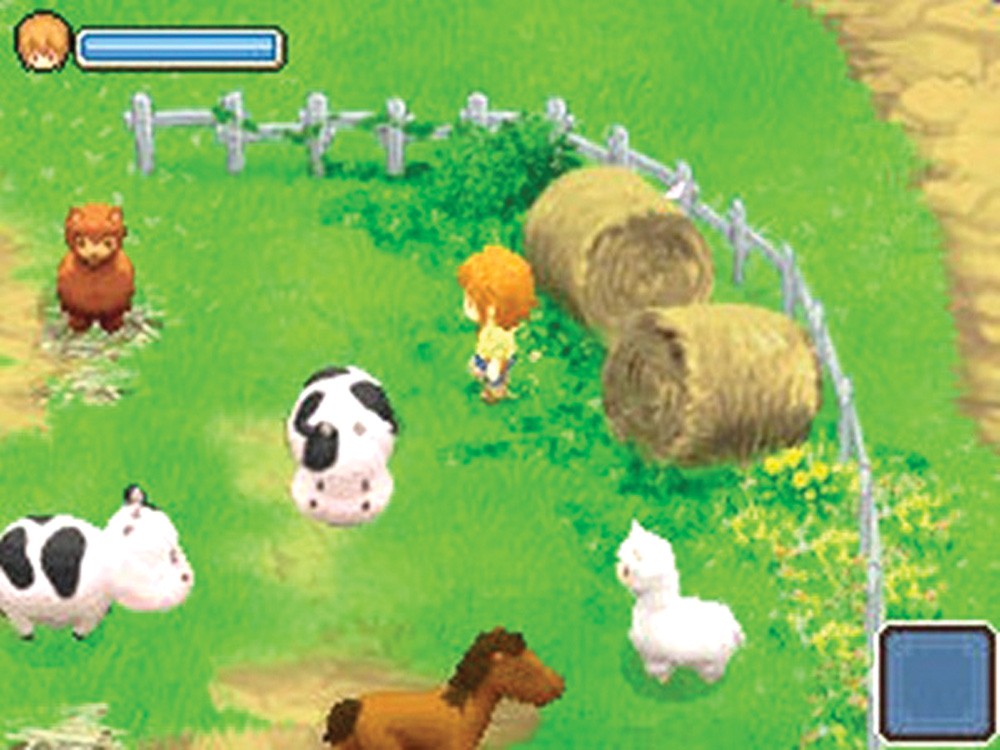 Alpacas and horses and cows - oh my.

Are you a farmer or a rancher? That’s the question at the heart of the latest Harvest Moon. In The Tale of Two Towns, players choose to live in one of two rural villages — the animal-oriented Bluebell, or the plant-driven Konohana. Both towns feature the trademark Harvest Moon low-pressure gameplay. Players still live out their virtual lives as the owners of a farm (or ranch), patiently planting, nurturing and harvesting their crops.

Harvest Moon: The Tale of Two Towns
Rated Everyone
Nintendo DS and 3DS There is no “winning” a Harvest Moon game, though The Tale of Two Towns has more of a plot than most. It seems that at one time, Bluebell and Konohana were united. But now they’re separated by a mountain full of rocks, and a gulf of incompatible agricultural activities. The farmer and the cowman can’t be friends.

The only solution is for the player to display a pioneer-grade green thumb or to prove that they can run a ranch with the best of wranglers. The two towns cannot know tranquility until someone comes along who knows how to both farm and ranch. You see, cooking contests seem to be the only things that the two villages have in common. And to win the cooking contests, players need farm- and ranch-fresh ingredients.

Unfortunately, the farming and ranching division of The Tale of Two Towns is not balanced. Raising animals is a lengthier, more labor-intensive activity, since lambs and cows grow slowly and must be emotionally managed by petting them using the 3DS’s touch-screen. Cold-hearted vegetables, on the other hand, just require a moment or two of watering each day, and their quality can be improved just by adding fertilizer.

This makes for an unbalanced game, especially during the beginning seasons. Harvest Moon veterans — and the series’ legion of devoted fans — might actually enjoy the differences in difficulty. But for the ordinary player (and I’m not sure anyone who plays fake-farming is ordinary), separating the animal and plant portions of the game takes away half the fun for most of the time. Instead of charting a free course through the game’s activities, players are forced to pick sides. But who actually knows the difference between a farmer and a rancher, anyway?

THE GOOD: Players may be forced to choose between two towns, but most of their other options are wide open. They can grow fruit trees and vegetables. They can raise chicken and cattle on the same land. If they’re industrious, they can become honey, yarn or cheese manufacturers — or all three. Soup can be simmered and raisin bread baked with the same oven. Aside from location, The Tale of Two Towns is a very free-form, open-ended game.

THE BAD: The Tale of Two Towns displays graphical lag — with jittery graphics and jumpy animation — when only a few characters are onscreen. And it caused my Nintendo 3DS to freeze repeatedly. After checking online, I discovered that 1) other people are having the same problem, and 2) there is no reliable solution. It turns out that Harvest Moon: The Tale of Two Towns isn’t just an unbalanced game — it’s an unbalanced game that doesn’t work.

THE BOTTOM LINE: Once is more than enough for Harvest Moon: The Tale of Two Towns.