Has Karen Stratton been the voice of beleaguered city employees - or a stoker of employee conflict? 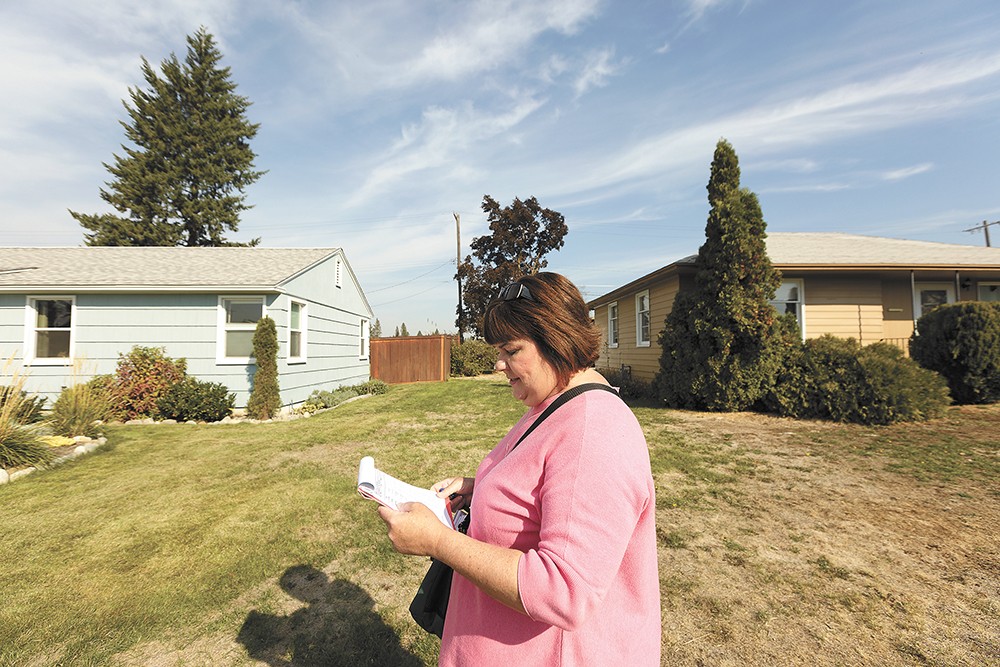 In interviews with the Inlander, several of City Councilwoman Karen Stratton's electoral opponents this year criticize one recent council action in particular — the vote earlier this year to reaffirm that City Hall was open to all, including homeless people.

But, in fact, Stratton was one of only two votes against the ordinance.

"This comes from my heart, and it comes from my conscience," Stratton began the night of the vote. It wasn't because she was angry or insensitive or lacked compassion, she said, it was because she believed the ordinance didn't do much more than stoke division.

"This proposed ordinance has only driven a bigger wedge between those helping the homeless and those of us who have to try to decide what's the best solution for everyone," Stratton said. "The homeless and our employees have been caught in the middle of this battle, for I don't know how many months. And nobody wins."

In one sense, it showed Stratton as a woman who sought to be a bridge. Stratton, who represents District 3, including West Central and Northwest Spokane, is proud of bridging the gap between tenants and landlords while working on a bill barring discrimination against rentals with housing vouchers. When it came to the controversial Monroe Street Corridor road diet, Stratton was ultimately supportive. But she was also highly sympathetic to the concerns of businesses worried about the impact of construction. Stratton can point to a slew of instances where she's tried to find a compromise between feuding sides, whether with forging an ordinance that addressed both ride-share and taxi driver concerns or modifying the council's sick-leave ordinance to help out small businesses.

Her vote on the City Hall ordinance, however, also highlighted another value of Stratton's: She considers herself a champion of rank and file employees, particularly those in civil-service positions. Before being appointed to the City Council in 2014, Karen Stratton was public information coordinator and a city clerk. She'd had her own run-ins with the Human Resources Department, filing a legal claim over the hostile work environment she says she'd experienced.

So as a councilwoman, Stratton has frequently sounded the alarm over the elimination of civil service positions and the growth of positions exempt from the civil service process, allowing the mayor to hire or fire them directly.

As council members, she's pushed to influence the minutia of everything from the Condon administration's salary caps, to vacation schedules, to parking costs, to transfers from one department to another.

To Stratton, it's all about accountability and about protecting employees.

"Do I pick sides?" Stratton says. "Yes. I will always stand with those in civil service, those employees that are doing the everyday work."

The challenge, however, is that the workers at City Hall don't necessarily speak with a unified voice. Records of employee complaints, obtained by the Inlander this week, suggest a Human Resources Department wracked by internal strife, with employees stranded on opposite sides of a sometimes bitter divide.

According to the city records, Cavanaugh has been the subject of multiple independent investigations from employee complaints, including allegations of discrimination, bullying and retaliation — but those were determined to be unfounded.

"Karen has been very vocal in her criticisms of me, even in public meetings," Cavanaugh says. "Which is weird because we used to be friends."

She says Stratton is relying on partial information when she levels her public accusations. Cavanaugh argues Stratton truly believes she's representing all employees, but that she often only listens to the ones with complaints and not the responses from administration.

"I just wish Karen would see both sides of a story before she makes up her mind," Cavanaugh says.

Last year, an independent investigation triggered by Cavanaugh summarized employee concerns about council members, including Stratton. The investigation reported that some exempt employees felt devalued and discounted by Stratton and worried "that their jobs are not secure" as a result. Stratton dismisses the investigation, which she was never interviewed for, as a politically motivated hit job.

Meanwhile, Stratton and other council members expressed frustration with their difficulty getting answers to questions from the mayor's staff.

"I can't tell the last time that the mayor or [City Administrator Theresa Sanders] or anyone has come over and talked to us," Stratton says.

That communication gap could get worse. Now, Cavanaugh says that because of the "disrespect" she's felt from Stratton, she doesn't plan on attending any optional committee meetings with council, or requiring any of her staff to do so.

It's a move Stratton has pulled herself. Last year, she resigned from one city committee because she was disgusted with how she believed Public Works Director Scott Simmons treated employees.

"I'm not going to waste my time sitting in those meetings, when I can be at my desk, returning calls, working with my neighborhoods, taking care of the things that I have some control over," Stratton says.

In fact, four years ago, due to frustration over the mayor's endorsement of her opponent and a comment that he made about being unaware of her marijuana farm, she stopped having regular meetings with Mayor David Condon.

"We've never met again, and I think that's fine," Stratton says. She'd only speak with him on the rare occasions she felt it was necessary.

If Stratton is re-elected, of course, there's an opportunity for a reset. Cavanaugh plans to retire. And Condon will be replaced by a new mayor. Stratton says she'll work with whoever that is.

"I can work with an elected official who looks at me and says, 'I'll support you in your effort to have Garland paved from Maple to Northwest Boulevard. Let's work on that, Karen,'" Stratton says. "I'm all in. I don't care if it's Mickey Mouse that's the mayor."

Other than mayoral and council president candidates, no city of Spokane candidate has raised more money than Andy Rathbun. About $29,000 of the $46,500 he's raised comes from Rathbun's own pockets, with another $4,275 coming from other Rathbuns.

An Air Force veteran, a landlord and a veteran of the West Central Neighborhood Council, Rathbun has spent a significant amount of time critiquing City Council President Ben Stuckart's "fair elections" campaign finance code as being too convoluted with too many loopholes. He says he avoids the Monroe Street Corridor since the road diet, and that traveling east-west across the corridor has become nearly impossible since the update.

"I think Karen is a sweetheart. I have had coffee with Karen," Express Employment account manager Jeff Rugan says. "I have no bone to pick with Karen whatsoever."

In other moments, however, Rugan criticizes the City Council for being too conservative — in the dispositional sense, not the political sense. He wants to see the council be more innovative and take more risks. Why not, he suggests, create a new arts center in an effort to keep Spokane vibrant?

He says the biggest issue is homelessness — when he bikes to work early every morning he sees people sleeping in doorways. He says the council should look into the possibility of pushing addicts into rehab, while also keeping in mind the legal and ethical challenges associated with that idea.

It's like his mom used to say about football: "You root for your team to win, you don't hope for the other team to lose."

He respects a lot of what Stratton has accomplished. He specifically thanked her for her vote to preserve single-family zoning in Indian Trail. Yet he was critical over the council's delay in approving a land deal with the Union Gospel Mission and disagreed with the council's support for the Monroe Street Corridor road diet.

Martin, a fraud examiner for the state of Washington, believes there needs to be more ideological balance on the council.

The right side of council candidate Ken Side's "Works And Deeds" website is a space reserved for his "King Arthur adventure," his fantasy world of thousands of intricately painted "medieval military figurines and buildings."

The left side, however, is his council page expressing concern that our "left wing radical progressive socialist PC crowd is assaulting our gun rights, killing our babies."

"I believe America is becoming too Sodom and Gomorrah-ish and needs to center itself," he writes.

A self-described "prepper," Side is particularly bothered by what he calls the "LGBTXYZ situation," reacting to Pride events by encouraging gays to "stay in your closet, quit shoving it down our throats."

On the other hand, he supports some of the council's actions to address climate change and says, "I think the city's doing pretty good with the homeless issue."

As a Lyft driver, Christopher Savage is a uniquely qualified voice to talk about the trouble with the Monroe Street Corridor project. He says he's seen the way traffic slows down during rush hour, the way the intersection at Carlisle and Monroe becomes dangerous.

Savage has been regularly attending neighborhood meetings and is critical of council members for not appearing at more of them. He wants more city funds directed to District 3, particularly to improve the considerable number of alleys in the district.

"We're going down a direction that might not be good for Spokane," Savage worries. "I believe that we're wasting a lot of Spokane's money with a lot of social programs that seem to go nowhere."

In a City Council election filled with conservatives challenging liberal incumbents, Savage is a committee officer for the Democratic Party. Although, he says, he's been a little uncertain about that lately.

"I'm a crossroads myself with my political affiliation," Savage says.

The original print version of this article was headlined "Karen Stratton: Bridge or Wedge?"