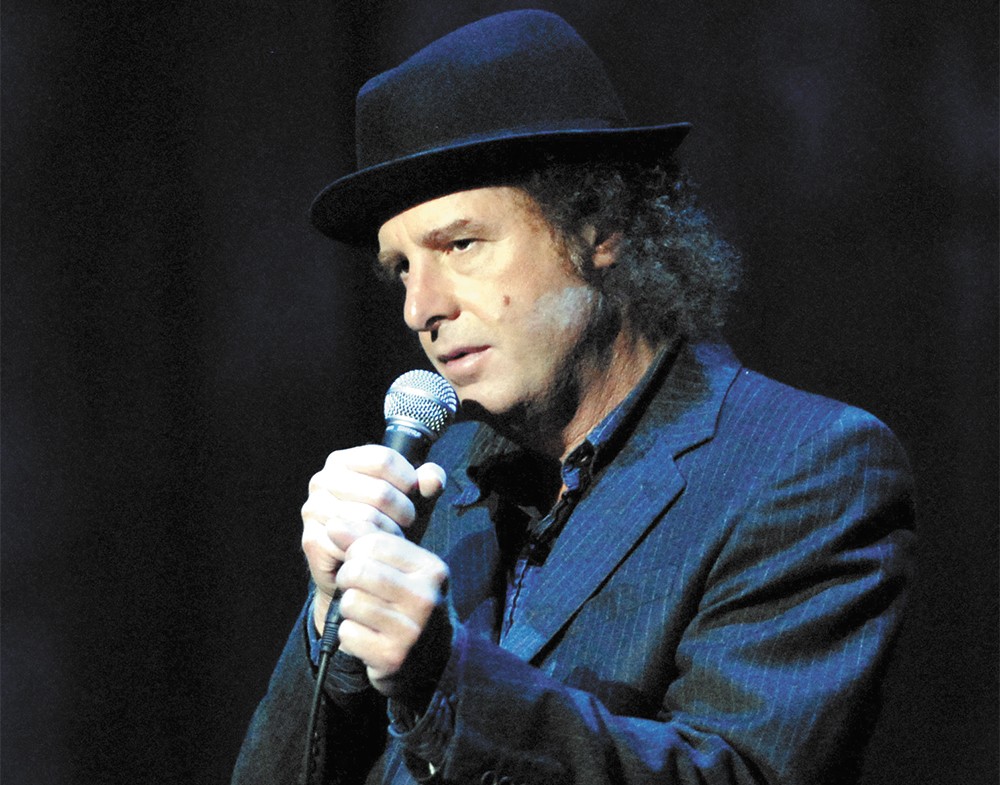 Jorge Rios
Steven Wright is using his actual-size map to find Spokane for his show Friday at The Bing.

Comedians can spend years trying to find their "voice,"

that special something that makes them stand out and elevates their jokes to a place where they can be heard above all the "airplane food is so bad" gags.

For Steven Wright, the voice was there from the first time he stepped on stage in 1979 to do three minutes at a Boston open-mic night, even if the material wasn't anywhere near the level that would eventually make him a star.

The voice remains the same all these years later, a deadpan rumble delivering absurdist and surreal one-liners one after another, a stream-of-consciousness approach utterly his own. Remarkably, Wright's singular voice took him from those first three minutes to the stage of The Tonight Show Starring Johnny Carson within three years, and he quickly became one of the legendary host's favorites thanks to jokes like these:

• "I stayed up all night playing poker with Tarot cards. I got a full house and four people died."

• "I went to a place to eat, it said 'breakfast anytime.' So I ordered French toast during the Renaissance."

Getting on Carson's show was the fulfillment of a teenage fantasy; Wright's obsession with becoming a comedian started by watching Carson nightly. Getting on once was a dream come true. Having Carson ask him to return just a few days later launched Wright's career into hyperspeed.

"Loved him, loved his monologue, loved the comedians he had on like [Richard] Pryor, George Carlin, Steven Martin, Robert Klein, guys who came on and I never saw again," Wright says. "I was fascinated by someone coming out and talking about life, all this stuff they made up. Funny stuff."

Wright didn't make that first walk onstage until he was 23, a year after graduating from college, and it took a serious effort.

"It was completely a conflict of my basic character of not wanting to talk in front of a crowd," Wright says. "People are horrified by public speaking. It's one of the main fears people have, and it was for me, too. So I had this giant conflict. I was really afraid to go up there. But I forced myself to do it. It was very nerve-racking. My legs were shaking. It took years before I got anywhere near comfortable."

Thanks to his dedication and early success on Carson, he had years to work on it. After a couple of spots on The Tonight Show, Wright got an agent and started traveling, playing comedy clubs where suddenly he was a headliner. Despite the bigger crowds, Wright says his naiveté kept him from feeling any pressure. "I just wrote more jokes and kept on performing," he says, as the tours stretched out for months and moved to bigger rooms.

In 1985, his first album, I Have a Pony, earned Wright a Grammy nomination, and he landed his first HBO special the same year. In the years since, he's done some acting (Natural Born Killers, Half Baked, the voice of DJ K-Billy in Reservoir Dogs), won an Oscar for his short film, The Appointments of Dennis Jennings, and kept right on getting back on stage, into that unnatural environment of stand-up comedy that he describes as "like walking on a tightrope, like walking on ice that's cracking underneath you. There's an electricity, a very electric vibe that's happening, even though it might look like I'm just walking back and forth and mumbling to myself.