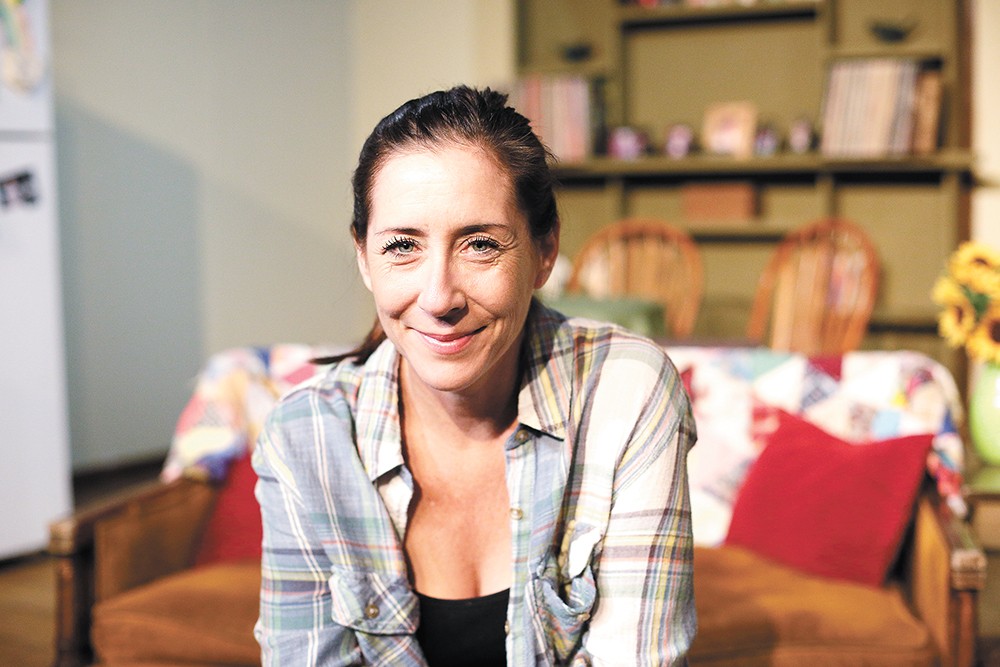 Young Kwak
Molly Allen is best known as a KZZU radio host, but one of her scripts was selected for this year's Playwrights' Forum Festival.

and for close to three decades, the Spokane Civic Theatre's annual Playwrights' Forum Festival has given them one.

Every year the festival solicits one-act scripts from across the Northwest via an open call for submissions. Then a committee reviews those submissions (this year the pool was approximately 50 scripts), selecting multiple works on the basis of merit and variety — no names are supposed to appear on the scripts, just as the names of the panel of judges aren't supposed to be divulged.

"We don't tell people who's on the committee because the plays are read blindly," says Festival Director Matt Harget. "We don't know the authors when they're read. What each judge is looking for depends on each judge, but generally it's strong writing, a compelling premise, interesting characters, good dialogue — all that good, classical drama stuff."

Harget, who has been involved with the festival for the past 18 years, says that this year has brought "the strongest slate of shows" he's seen so far. A total of eight plays have been selected, all with a running time of 30 minutes or less: Interlude by John Michael Duggan of Boise; Memories of the American Occupation by Paul Lewis (Bainbridge Island, Washington); To Mr. Wilson c/o Shapiro & Gold by Aleks Merilo (Gig Harbor, Washington); What Floor by Elena Naskova (Seattle); Motherhood by Robin Brooks (Seattle); Grief by Jessica Loomer (Spokane); The Sum of Me by Catherine Rush (Seattle) and The Hostage by Molly Allen (Spokane).

In addition to heading up the festival, Harget is directing Memories of the American Occupation. He describes it as a "World War II drama" in which "a soldier is killed in the last couple of weeks of the war, and he's given, through a magical device, an opportunity to go back and have a few last words with his wife before he dies."

Loomer, whose own play is among those featured, is also directing Motherhood. Jamie Flanery, who recently co-directed Arcadia at Stage Left, is directing To Mr. Wilson. Another veteran of the local stage, Wes Deitrick, is directing The Hostage as well as performing a silent role in Interlude opposite Trudy Rogers.

"It's a play about two people sitting in the discomfort of a subway car. We're both kind of lonely, but we don't want to interact a whole bunch. And there are two people speaking who are really in our imagination," Deitrick says of Interlude.

By contrast, The Hostage is a "full-out comedy" about two kidnappers who "didn't think [it] through."

"It's almost kind of Dumb and Dumber," Deitrick says, laughing. "They're not too bright, but they have a morality to them."

For the performances, the plays will be divided into two rotations, A and B, that will be staged in the Civic's Firth J. Chew Studio Theatre on different days. Rotation A, consisting of Interlude, American Occupation, To Mr. Wilson and The Hostage, runs on June 8, 10 and 16. Rotation B — What Floor, Motherhood, Grief and The Sum of Me — runs on June 9, 15 and 17. They will be black-box productions with minimal set design, and an audience talkback or Q&A session following the performances. Because the festival is competitive, all eight plays will be vying for the Festival Adjudicator Award and an Audience Choice Award.

"The other thing that's kind of fun about the festival is that, if one play doesn't grab you, you don't have to sit there all night. There's going to be another play in 10 minutes," says Harget. "And these are things you haven't seen before. It's great to see Oklahoma! for the hundredth time, but sometimes you like to see something new." ♦