Power tools are dangerous, even for small weekend jobs around the house 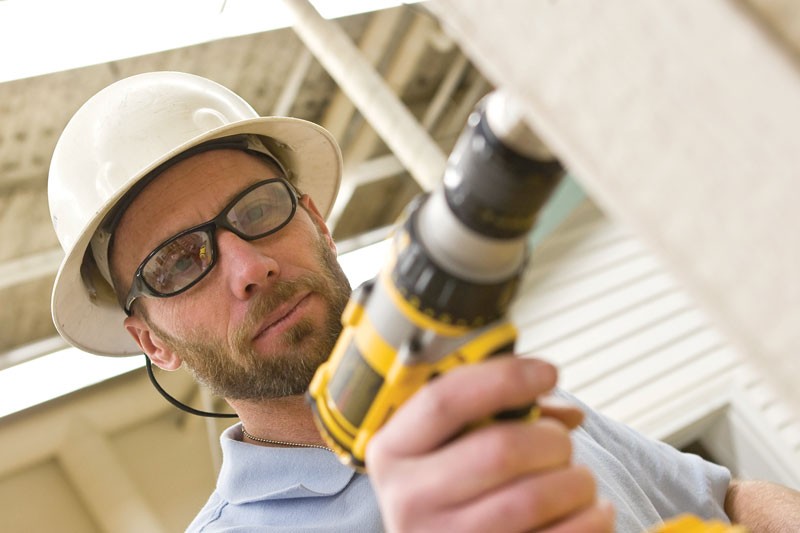 Stephen Schlange
Spokane Skills Centers Chuck Sauer: "People working around the house really should follow the same safety precautions that professionals in the construction industry are mandated to follow."

So your home is your castle. It’s your sanctuary, where your heart is. But couldn’t it look a little better? Don’t we all think our homes might use a little something more?

Perhaps the place feels a bit outdated. You want to spruce things up... do a little work around the house. Maybe hang a few pictures or do something even more ambitious, like build a new deck.

Whatever you decide, there’s one crucial key to making your project a success: safety.

“Safety with power tools or hand tools or any type of tools — safety is number one,” says Chuck Sauer, construction technology teacher at the Spokane Skills Center. “People working around the house really should follow the same safety precautions that professionals in the construction industry are mandated to follow.”

That seems like a reasonable condition of being a Weekend Warrior … or Relaxed Renovator … or Casual Constructor. Whatever the level of your expertise or the difficulty of the project, keeping safety in mind should be a top priority.

Sauer says there are safety steps for any and all kinds of equipment you use around the house, power-tools or otherwise.

LADDERS: Make sure they’re structurally sound and are placed in a solid position;

POWER SAWS: The guards have to be in place, the cord has to be out of the way, your work area has to be clear. Be sure that nothing can get in your way and that any blowing sawdust won’t present a problem. And you should wear eye and hearing protection;

DRILLS: Make sure the drill motor can’t engage before you’re ready. The drill shouldn’t be connected to a battery or plugged in while working with the chuck. Make sure whatever you’re drilling is solidly in place and, again, wear eye and hearing protection.

“Most of this is common sense,” says Sauer, “but common sense isn’t so common anymore. And, being totally honest, sometimes we don’t take the safety steps we should. I’ll train students ladder safety, and they’ll come back from the weekend and they’ll have fallen on a piece-of-junk ladder.”

While it is good advice to “do what the pros do,” it’s probably a fact that everyone, at some time or another, lets their guard down.

“There are two very common denominators for most of the patients,” says Dr. William T. Page, describing his experience with treating people injured while using tools. “It’s either someone at home who is unfamiliar with the equipment or it’s a person who works with the equipment every single day and they had a momentary lapse in judgment.”

As a hand and upper-extremity surgeon, Dr. Page, of the Orthopaedic Specialty Clinic of Spokane, says he sees “tons” of patients injured while working with tools.

“In the winter, it’s snow blowers. The chute gets clogged, they reach in and as soon as it frees up, it grabs their finger,” he says. “Year-round, the most common injuries I see are from table saws or the hand-held circular saws.”

Dr. Page proceeds to describe, in vivid-for-the-layperson terms, what happens when a saw cuts through human tissue. Suffice to say that the doctor knows, from his wounded patients, that using the saw’s safety guard is a must.

According to Sauer, if you use a circular saw, “You want to make sure you’re not cutting too deep and that the saw doesn’t bind and that you don’t get kickback. You want to make sure that the one piece of wood falls away. You don’t want to be called ‘Lefty’ for the rest of your life. That’s not a good nickname to pick up.”

Sauer says he’s convinced that a consistent commitment to safety would mitigate those numbers. Dr. Page has come up with an even more surefire way of preventing injuries while doing his own home projects: avoidance.

“I used to do a lot of work around the house,” says Dr. Page. “However, less now than ever before. And that’s purely based on the injuries that I see in very normal people not unlike myself.”