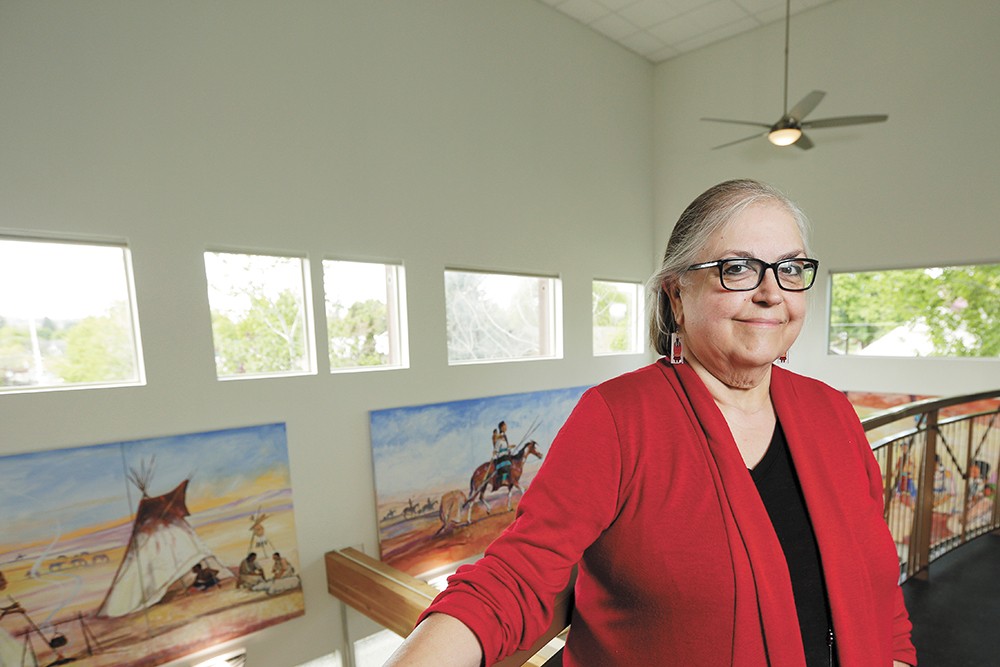 More than 30 years ago, it was becoming increasingly clear to Toni Lodge and other concerned parents, neighbors and friends that someone needed to step in to help change the story for Native American kids in Spokane.

"We just were tired of people saying Native kids have the most suicide, most dropouts, most everything," Lodge says. "We were like, 'OK, well we'll just figure out a way to be part of the solution.'"

The group cobbled together $100, and someone donated a Ford Pinto to be auctioned off. With that little bit of seed money, the group incorporated and started an Indian Youth Leadership Program that would serve as the core mission of the NATIVE Project.

From there, things escalated quickly, Lodge says. Kids participating in the program wanted their non-Native friends to join. Then it became clear some of the youth needed mental health and substance abuse treatment. Then their families needed treatment, too.

So the NATIVE Project started offering more and more of those services. Eventually they got a nudge from the federal office that guides care for members of Native American tribes.

"Indian Health Service said, 'You know, Spokane is the eighth-largest urban Indian city in the United States,'" Lodge says. "Spokane County has people from over 300 tribes that live here because of the 1950s federal policy of relocation, where people came here and worked in the mines and for the railroad, for Kaiser."

With an ask from IHS, the NATIVE Project put in a bid to become the regional Indian Health Clinic, says Lodge, and they won.

"We started with $100 and last year our budget was $10 million. So we're truly a community-based, community-grown organization," Lodge says. "We are probably one of the most integrated behavioral health and medical clinics in the area doing this Medicaid transformation work. It's very invigorating to be able to serve not only Native people but other people of color, Medicaid patients, and to serve people in West Central. We are the safety net of the safety net."

Lodge, an enrolled member of the Turtle Mountain Band of Chippewa Indians, originally grew up in North Dakota.

It was there that she first started working as a journalist in the '70s, which is how she wound up covering the cases that led to landmark legislation that restored and protected Native American rights.

"The Indian Child Welfare Act, the American Indian Religious Freedom Act, those were all passed in the '70s," Lodge says. "And I'm sitting there, just a little young reporter going, 'Oh my God,' and listening to the stories that were never told to us in the schools about all the children that were taken away from their parents."

On top of suffering through family separation, Native Americans weren't federally allowed to practice their own religions until 1978, Lodge says, a shock in "a country supposedly founded on religious freedom."

"You're sitting there as a young Native person and you realize, 'Oh my God, we're the occupied people!'" Lodge says. "I mean so much of this was never taught to us."

She moved to Spokane and, not long after, the NATIVE Project came to be. On top of being one of the founders, Lodge has served as CEO for the last 27 years.

In May, Lodge was recognized for her contributions by being inducted into Spokane's Citizen Hall of Fame.

"There have been tens of thousands of people's lives who have benefitted from her engagement in Spokane," writes John McCarthy, a doctor with the NATIVE Project and leader at the University of Washington's medical school in Spokane, in his letter nominating Lodge for the honor. "Not many people appreciate the profound impact this clinic has had for our Native American community and the leadership opportunities it has promoted within that community. The reality, however, is that for three generations of families, Toni and the clinic have been supporting a march towards healing of physical, cultural, emotional and spiritual distress."

One of the things Lodge says she is proudest of is that no matter who you are, there is someone who works at the NATIVE Project who looks like you.

As at the beginning, the main objective is still to coach youth and get them on a path toward successful careers and healthy lives. Many who work at the clinic are former leadership program participants, Lodge says, and every bit of money made goes right back into youth programming, which is all done with the Native American concept of seven generations in mind. Under that thinking, decisions are made based on how they would impact grandchildren seven generations from now.