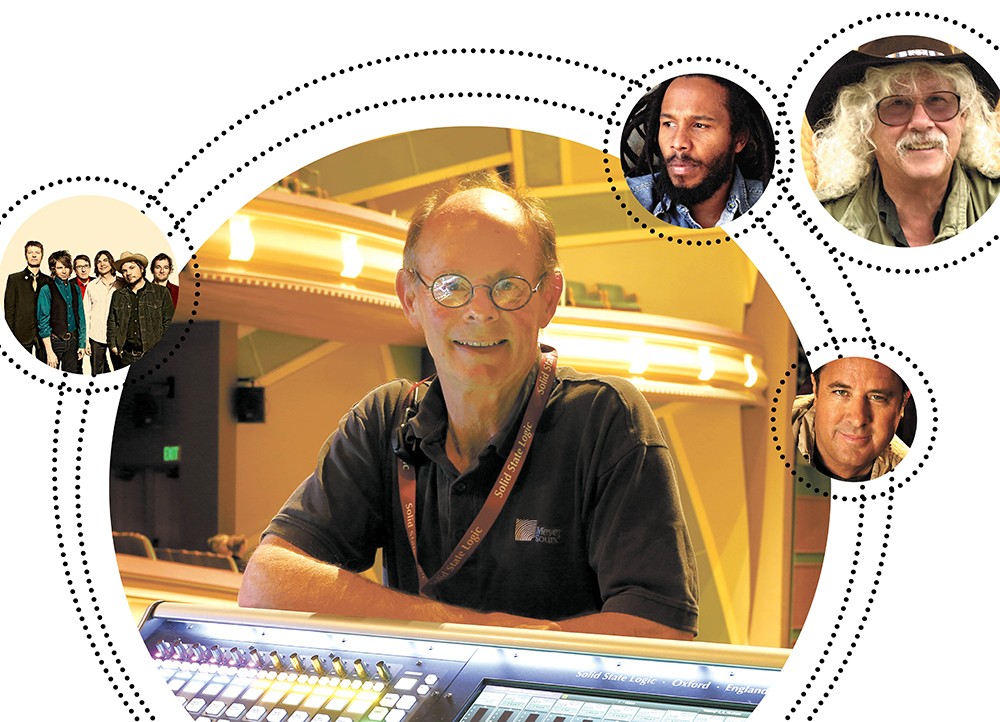 . Discerning malfunctions like garbled speakers or screaming feedback is easy, yet it takes a trained ear to tame the acoustics of a venue — making an act sound like a recording, only better. And George Relles has listened for tuned perfection in mixing sound for 40 years, including for the Festival at Sandpoint since its inception in 1983, where he treats each concert with the utmost seriousness.

"With ticket prices the way they are these days, people deserve to walk away going, 'Wow, that was an amazing experience that couldn't be duplicated,'" explains Relles, whose company George Relles Sound, Inc. is based in Eugene, Oregon.

Not only does Festival Executive Director Diana "Dyno" Wahl call him "the best," she says Relles' reputation is one of the reasons that the planning committee has enticed such high-end acts to travel to a small town in North Idaho. This year's lineup is one of the two-week festival's finest, with groups like Wilco coming through Sandpoint beginning next Thursday. In recent years, the Head and the Heart and the Avett Brothers have made appearances.

Relles is at the Britt Music & Arts Festival in Medford, Oregon, (one of a handful of West Coast festivals he's worked for decades) last week when he answers his phone between sound checks with Sugar Ray and Better Than Ezra. After all this time, he says that heading up to North Idaho every August has become a beautiful homecoming of sorts. But that doesn't mean it's one big party.

"I'm pretty much all business, and bands figure that out quick," the 65-year-old says. "I may not be working physically hard, but it's mentally fatiguing. I try to get to bed at midnight."

From the time he arrives at the festival grounds to install his sound boards and speakers to the time for teardown two weeks later, that bed is in a trailer on the War Memorial Field concert grounds. That way, he's always part of the action. Anytime the threatening gray of rain and thunder set in (as happened for last year's Ray LaMontagne show), he's positioned to toss a tarp over his audio equipment. And when a touring act rolls in with multiple trucks for early morning setup, he's on site to oversee all sound activities throughout the day.

"Mixing [an] orchestra to sound like there's no amplification at all, that is my specialty. There's not many people who have that skill set," says Relles, who also mixes the Spokane Symphony's outdoor events.

Relles admits that he's into rock music far more now than when he was a kid plucking away on a banjo, enjoying classical music and playing in a bluegrass band, which would turn out to be his first sound gig.

And while technique and a finely tuned ear are a huge part of sound engineering, so is using high-quality equipment featuring the newest digital technologies — the kind that cost well over a million dollars (one speaker runs $20,000).

He says that over the years, as the Festival at Sandpoint has grown, the covered stage has slowly inched away from the grandstand bleacher seating, making more room for picnic/grass seating, and a need for more sound equipment to enhance the quality experience.

"The stage was literally 20 feet away from the grandstand audience in the beginning," he recalls.

Near or far, Relles has worked with most of the acts coming through this year's Festival at Sandpoint. They'll know what they're getting.

"It will be fun to see Arlo Guthrie again. I'll enjoy that one," he says. "The Devil Makes Three and Ziggy [Marley] are great to work with, and Vince [Gill] puts on a great show. I'm looking forward to all of the days." ♦

With a father who has major ties to the Inland Northwest (check out Woody Guthrie’s “Roll On Columbia”), this folk singer-songwriter is full of stories anytime he comes through the area.

Another musician with a famous dad, this reggae artist puts on the dance performance of the festival, meaning the grass seating nearest the stage is designated for those wanting to stand and move to the beat.

AUG. 8: Vince Gill with the Barefoot Movement and Troy Bullock

Those who reckon old-school country is where it’s at should get a hoot out of this Country Music Hall of Famer’s performance.

This traditional classical concert, featuring the Festival Community Orchestra and Studio One Dancers, isn’t going anywhere, and for just $6 it’s a family favorite.

Rachael Price of Lake Street Dive (not to be confused with Drive) belts it out like the retro-sounding diva that she is, while the rest of the up-and-coming indie-pop four-piece makes it all sound soulful.

AUG. 14: The Devil Makes Three and Trampled by Turtles

Two bands sporting banjos, fiddles, mandolins and men with beards — what more could you want from an indie bluegrass show?

The popular indie “dad band” is one of the biggest acts to come through the festival. It should be one of the most attended shows of the bunch, so get tickets early.

Speaking of Festival At Sandpoint