a Cardiac Intensive Care Unit is not where anyone hopes to be in need of finding a bed. Even the prospect of visiting such a unit can be a little unsettling. But the nearly completed remodel and expansion of Providence Sacred Heart Medical Center's CICU shows it's possible to make places to care for seriously ill people less intimidating.

In the remodel process, thoughtful details were key, and nursing staff were included in the planning at every stage. "For example, nurses suggested that the corridors be reconfigured to form a lopsided circle," says Kim Grippi, RN, CICU nurse manager. "This change created a shorter distance for nurses moving among patients, and improved the ability to move equipment, beds and supplies throughout the unit." Nurses can chart on patients from niches between each pair of rooms, avoiding disruption. 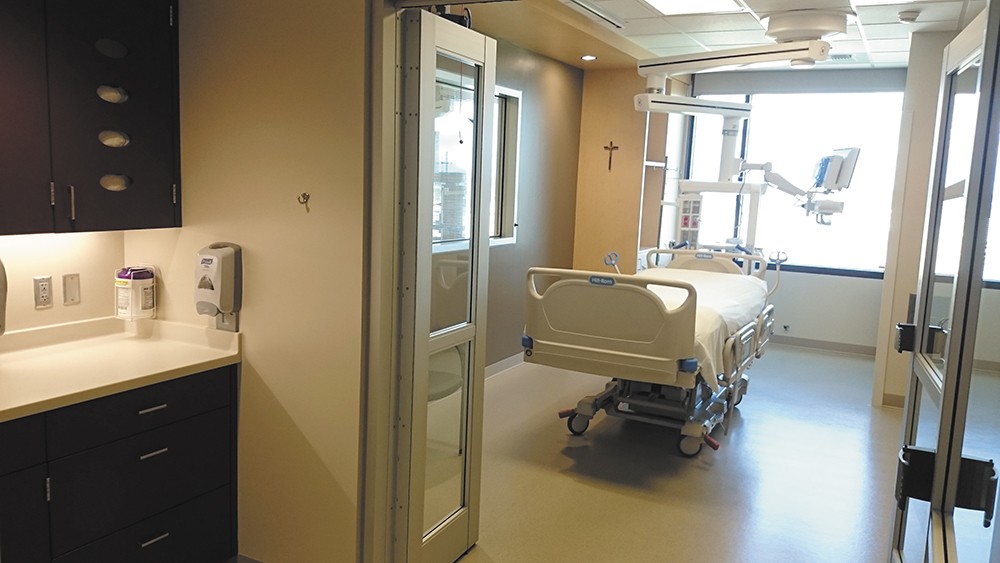 Features of the new CICU at Providence Sacred Heart.

Patient needs were of paramount concern, especially since some of them remain in the unit for weeks or even months while awaiting a heart transplant. Larger rooms with bountiful light will, for the first time, allow for more than one visitor. And beds are now more mobile, able to rotate to look out over panoramic city views from the hospital's hillside location. Doing the renovation in phases allowed the unit to remain open for the duration of the project.

Just a breath of fresh air can sometimes ease the burden of hospitalization, and for the first time, the CICU has direct access to the outdoors, in the form of the centrally located Kalispel Tribe Outdoor Courtyard. Featuring sitting areas framed by carefully selected hypoallergenic regional plants, the courtyard was funded by a $500,000 donation from the Kalispel Tribe.

More cardiac surgeries are performed each year at Sacred Heart Medical Center than at any other hospital in the state: 56 cardiologists and 11 cardiac surgeons are on staff. The $19.2 million expansion from 22 to 34 beds was approved as part of the 2012 Certificate of Need agreement with the Washington State Department of Health.

The Providence Health Care Foundation of Eastern Washington has raised $1.8 million for the CICU campaign. In hopes of reaching their $2 million goal by the end of the year, they are seeking donations from the community. The names of those contributing $1,000 or more will be listed on the unit's donor wall. Visit phccardiaccare.org to learn more.