One delicious slice is never enough 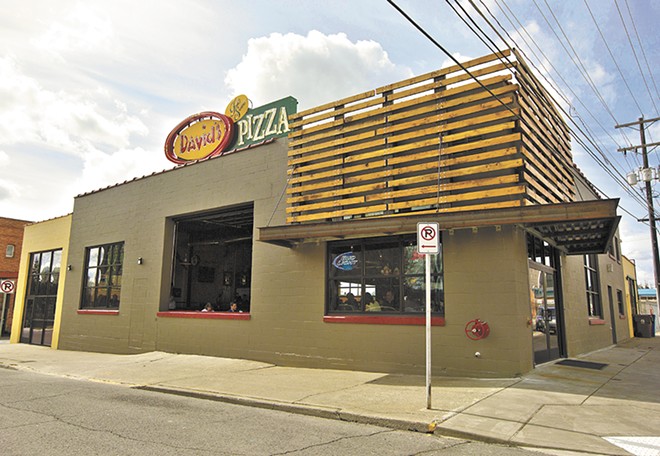 Young Kwak
The recently opened David's Pizza is located across from the Spokane Arena.

Bennidito's Pizza The 20-plus pizzas on Bennidito's menu feature thick, hand-tossed crust that's soft and "bready" around the rim with a thin and crisp center, making it a "best of both worlds" type of pie. Choices go way beyond just plain cheese pizza — like the Maui Wowie, the Saxon or Boogie Fever. They also serve hot sandwiches, pastas, salads and a bevy of microbrews and wine. Get some of their famous Beer Buddies to go along with your pint as you chat up your South Hill neighbors or take in the tail end of a game. The small but mighty patio is the place to be in the summer. 1426 S. Lincoln St. • 455-7411 • benniditos.com

David's Pizza Founded in the mid-'90s, David's Pizza was forced to shutter its iconic Logan neighborhood spot four years ago. Finally reopened in April 2015 in a location near the Spokane Arena, the new David's reflects the same eclectic, garage-y vibe that fans recall from its old spot but is two times bigger. That means all the more room to eat David's classic handcrafted pizzas along with their sandwiches (which come with a fresh cookie), stromboli and calzones. Note: this is the same pizza you'll also get at Famous Ed's on the South Hill. 803 N. Post St. • 483-7460 • davidspizza.com

Fire Artisan Pizza With a classy, welcoming ambience, Fire Artisan Pizza serves the same fresh pizza in Spokane as it does at its sister restaurant in Coeur d'Alene. Each pizza —ranging from margherita to one loaded with sausage, pepperoni, salami and bacon — is cooked quickly in a sweltering brick oven, hence the name Fire. 517 E. Sherman Ave., Coeur d'Alene • 208-676-1743 | 816 W. Sprague Ave. • 413-1856 • fireartisanpizza.com

The Flying Goat A quintessential Spokane restaurant, the Goat offers some of the best Neapolitan-style pizza in town and a drool-worthy collection of beers and wines. Everything here is made from scratch each day — from the dough, to all the sauces and dressings. Even some of the artisan meats are cured in-house. Toppings span from the classic to the gourmet. Don't be afraid to try the Kiernan, with a medium egg resting on top of a mound of arugula, cheese and Italian sausage. Trust us. It's delicious. 3318 W. Northwest Blvd. • 327-8277 • theflyinggoat.com

Gatto's Pizza The EWU jazz band entertains customers at Gatto's during the school year, but the pizza is the main attraction at this Cheney favorite. A college hot spot where billiards and games can keep you entertained while waiting for beer and pizza — one of the most popular is the Nine Lives pizza, featuring salami Canadian bacon, pepperoni, sausage, mushroom, olives, green peppers and cheese — Gatto's is kid-friendly, welcomes families and also serves ice cream. 1011 First St., Cheney, Wash. • 235-2800

Maialina Pizzeria Napoletana This restaurant, owned by the same folks behind Moscow's Sangria Grille, features pizzas made largely with local and seasonal ingredients, cooked in less than two minutes in a wood-burning oven at more than 800 degrees. Other rustic Italian cuisine such as daily homemade pasta, antipasto and Italian cured meats and cheeses make up the menu. There's also a large Italian wine list that represents each of the country's wine regions. 602 S. Main St., Moscow, Idaho • 208-882-2694 • maialinapizzeria.com

Monterey Café Maybe it's the brightly colored island theme, but there's something about Monterey that beckons us to come in, sit all day, drink beer, eat pizza and sing karaoke. It's a breezy, friendly place that's open for lunch, dinner and late-night snacking, and you can sing karaoke there any night of the week. Choose from a massive menu of pizzas, like the savory Wingman, with creamy buffalo sauce, chicken, bacon and Gorgonzola cheese. Also watch out for Monterey's daily "power hour" from 8 to 9 pm, featuring $1 Coors Light cans, $1 Fireball shots and $3 Long Island iced teas. 9 N. Washington St. • 868-0284 • spokanemontereycafe.com

McClain's Pizzeria The pizza dough at McClain's is made fresh daily, then topped with specially seasoned marinara sauce and Galbani mozzarella cheese from Italy. The restaurant continues to add new pizzas and wraps, but the Roslyn pizza — Canadian bacon, cashews, minced garlic and artichoke hearts — remains a favorite. Expect them to have a dozen beers on tap, a lunch special (Monday-Friday) and a quality happy hour (3-6 pm, Monday-Friday). Gluten-free options are available. 10208 N. Division St., Suite 104 • 368-9045 • mcclainspizzeriaspokane.com

Pacific Avenue Pizza Sit out on the patio in Browne's Addition in the evening sun. And then order a pizza — yeah, sandwiches make the menu, but this place is about pizza. One pie called the Dirty Sanchez, which includes chicken, black beans, salsa, onions, olives, cheddar, mozzarella and cilantro, definitely stands out. And for those pepperoni connoisseurs among us, Pac Ave's take on the classic features extra-large pieces of pepperoni that you'll want to peel off and put in your mouth as soon as it lands on your table. Tuesday specials include $2 slices and $2 pints. 2001 W. Pacific Ave. • 624-0236

The Park Inn As Sacred Heart's campus grows around the Park Inn, this South Hill institution remains untouched by time. They serve straightforward bar fare here, like burgers and what we would argue are the cheesiest pizzas you can find in the Inland Northwest. This old-school approach seems to be working — the P.I. is consistently packed with health-care workers, neighborhood regulars, beer lovers and impromptu class reunions. 107 W. Ninth Ave. • 747-4425 • parkinnspokane.com

Republic Pi When its owners opened Republic Pi, a sister restaurant to the Flying Goat and Downriver Grill, they wanted to make the pizzas different, but not too different. They spent a lot of time perfecting the dough to combine the Neapolitan style with New World. The new pies include the Republic, a puttanesca pizza with fried calamari, and a vegan pie called the Naturalist, spread with green garbanzos and topped with roasted peppers, smoked onions, carrots, mushrooms and Brussels sprouts. Spokane brews help wash it all down. 611 E. 30th Ave. • 863-9196 • republicpi.com

Second Avenue Pizza Ever actually weighed a pizza? The Jukebox Special pizza at Sandpoint's Second Avenue Pizza weighs in at a shocking 7 pounds. Other "piled-high specialty pizzas" are also heavy-duty, with fresh ingredients for the summer boating crowd or those who need an after-mountain meal. Speaking of which, the Schweitzer Ski Flake might grab your attention with spinach, tomatoes, garlic, mushrooms, feta and asiago cheese and black olives. 215 S. Second Ave., Sandpoint, Idaho • 208-263-9321 • secondavenuepizza.com

South Perry Pizza South Perry Pizza was instrumental in the transformation of the South Perry District into a vibrant destination a few years ago. From the minimalist interior to a menu that covers the basics, simplicity is their mantra. And it works. Classic thin-crust pies such as the house pizza ($14) — which features pepperoni, mushrooms, sausage and caramelized onions — satisfy the traditionalists, while the mascarpone-based prosciutto pizza ($14) is more reminiscent of its European counterparts. 1011 S. Perry St. • 290-6047 • southperrypizzaspokane.com

Veraci Pizza After crafting their pizzas from a food cart for so long, Veraci finally took up residence in Kendall Yards in the summer of 2014. Now Veraci's menu extends beyond the artisan-style pizzas it's known for, offering a lineup of traditional Italian appetizers — caprese, a foccacia platter, antipasti — and several salads. Housemade tiramisu and cheesecake round out any meal, and the restaurant's bar is stocked with local and regional craft beers and wine. 1333 W. Summit Pkwy. • 389-0029 • veracipizza.com/spokane

Zentropa Pizzeria and Pub The smell of baking bread fills this warm neighborhood pub and restaurant in the early afternoon. Choose from about 16 thin-crust pizzas or opt for a sandwich like the BLT or the mushroom-dressed meatball, served on a bun made from this very same housemade, chewy, warm pizza dough. Salads are also available, as are some gigantic calzones. But don't miss out on the "wedgies" — wedges of pizza dough topped with garlic butter and cheese. Rotating microbrews are available, as well as a selection of regional and Italian wines. 122 College Ave., Cheney, Wash. • 235-4338 • zentropapizzeriaandpub.com