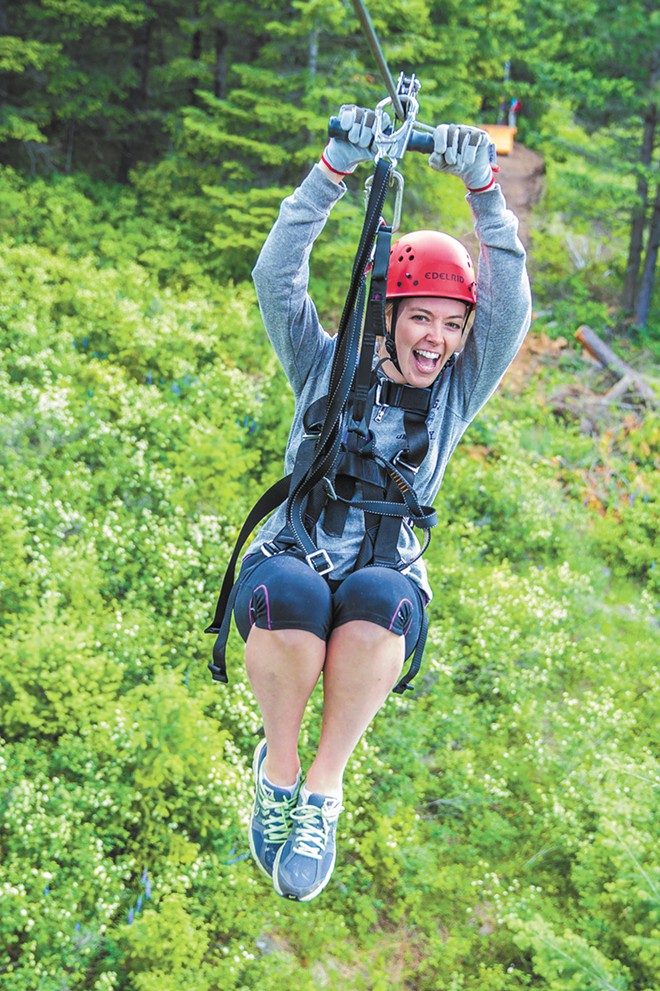 Rod Jeffers photos
Laura Regester soaring down a zip line. (below) A tour (above) at Mica Moon.

"All clear!" yelled the guide from the platform below.

"Zipping!" the guide next to me hollered as he clipped my harness to the line.

"Zip on!" we heard from below, and with slight hesitation, I leapt off of the sturdy wooden platform and into the trees.

Zzzzzzzzzip! My heart pounded as I soared over a forested valley, harnessed to the 1,000-foot cable. As I spun around and took in the bird's-eye view of the mountains around me, I was immediately hooked on zip lining.

Zip tourism has taken the country by storm, with lines appearing like webs across treetops, canyons and rivers in every state. Currently, there are more than 200 courses in the U.S., compared to just 10 in 2000. Ski resorts have started adding zip tours to their off-season offerings, drawing everyone from families to adrenaline junkies to test out the latest trend in outdoor activities.

There are even entire companies dedicated to zip line tours; the Inland Northwest has seen its fair share pop up in the past few years. Timberline Adventures in Coeur d'Alene and Mica Moon in Liberty Lake are the newest additions, joining Silver Streak in Wallace, Idaho — the first company in the region devoted solely to zip lining, along with Adventure Dynamics in Nine Mile Falls and Schweitzer in Sandpoint.

Zip lines have been around for more than 100 years, but not necessarily for thrill-seekers. There's evidence that they were historically used to transport supplies in mountainous regions, like the Himalayas and the Alps, and by wildlife biologists to study densely forested canopies.

It's no wonder that recreational zipping has seen an explosion in popularity — it's a great activity for a range of occasions, including company team-building, birthday parties, family outings or simply as a safe way to conquer a fear of heights. It seems that most people know someone who's zip lined somewhere like Hawaii or Costa Rica, but lucky for the rest of us, there are plenty of places nearby that offer an experience that is arguably just as exhilarating.

My first zip line experience began at the Mica Moon office, with a rundown of safety precautions and the various wildlife we might encounter during our excursion. Then, after a 10-minute van ride to the property and a bumpy UTV ride to the top of the mountain, we were quickly surrounded by fresh air and forest on all sides. It was hard to believe we were still just a few miles from the city.

When we made it to the top, we put on our gear: helmets, gloves, harnesses and a brave face.

The course included a total of eight lines, seven treetop platforms and two short trail hikes through the woods. We took our time gleefully zipping through the first six lines, each more thrilling than the previous one.

Finally, we came to the seventh line, literally called "The Point of No Return." It was immediately apparent why it had been given that name; we were looking out over a valley that somehow had a cable strung across it. Essentially, we could ride the final two lines, which were far faster and steeper than the others, or turn back now.

I wasn't about to chicken out this late in the game. With a single step off of the platform, I was soon hit with the rush that comes with floating freely through the air at nearly 55 mph, a speck surrounded by the immensity of nature. It was instantly easy to forget about little things (like I-90 traffic) that I'd been worried about earlier that day.

At the end of the tour, Rik and Heidi Stewart, the owners of the business and the 200-plus-acre property that the course covers, asked us each to share a single word to describe the experience. "Exhilarating" came to mind, but to be honest, words hardly began to cover it.