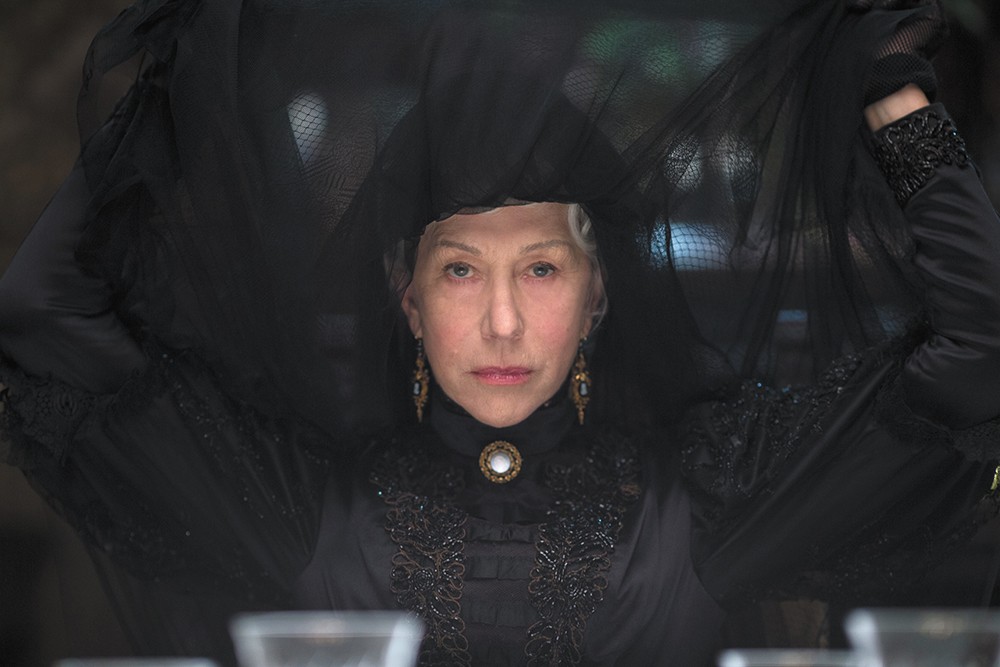 No, we don't know why Helen Mirren is in Winchester, but we're certain she was paid handsomely.

The Winchester Mystery House is a real place in San Jose, California,

built in 1883 and expanded upon by its owner, Sarah Winchester, who married into the rifle-making family and inherited much of its wealth when her husband died. It's supposed to be haunted, but what old house isn't? More interesting is how Mrs. Winchester had workers attaching new rooms, wings and floors to it 24 hours a day for months at a stretch, with no master plan, resulting in a labyrinth of architectural oddities that serves no purpose except to confuse visitors.

Sounds like a good setting for a horror movie, right? A haunted house that's also a maze? Winchester, directed by the Spierig brothers (Jigsaw), even spent a few days filming in the actual location, yet it still arrives as a watered-down supernatural thriller about the same old vengeful spirits trying to right the same old wrongs. Unlike real estate, location isn't the most important thing in a movie.

It helps to have Helen Mirren, though. The elegantly feisty Brit adopts an American accent (which diminishes her powers, but oh, well) to play Sarah Winchester in 1906, when psychologist Eric Price (Jason Clarke) is hired by the Winchester company — of which Sarah owns 51 percent — to assess her mental fitness.

Her erratic behavior isn't limited to the constant construction: It is also her belief that her family is haunted by the spirits of people killed by Winchester rifles. Sarah's niece (Sarah Snook) and her young son (Finn Scicluna-O'Prey) are living in the house at the moment, the latter plagued by sleepwalking nightmares and similar unnerving horror-movie behavior. (He's the kind of creepy kid who points at nothing and whispers, "He's coming for us.")

Dr. Price, who has recently suffered a loss of his own and is addicted to laudanum, spends some time stumbling around the house and getting scared by spectral images that appear for a split-second, accompanied by musical stings on the soundtrack to startle us. The Spierigs achieve one truly great scare along these lines by playing on our expectations, but the bulk of their efforts follow conventional patterns. The imagery is often creepy but nonsensical — sort of, "Hey, let's goose 'em with one of these, never mind whether it fits."

What's strange is that the film (written by the Spierigs and Tom Vaughan), while making hay out of the house's many rooms and Sarah's reasons for building them, ignores the other chilling possibilities: rooms with no exits, secret passageways, getting lost, etc. The house is so heavily populated by workers and household staff that it never feels like an isolated, creepy old mansion. It's a labyrinth that apparently doesn't actually confuse anyone. Which makes it a pretty useless labyrinth.

'Tis also a pity to have Helen Mirren in something this middlebrow without giving her anything fantastic to do. She gets no meaty speeches, no over-the-top behavior, nothing that will make future generations say, "Ah, remember the time Helen Mirren was in a run-of-the-mill PG-13 horror film?" If you're going to put her in a horror movie, drench her in blood and entrails, or have her get possessed and eat a goat, or something. Otherwise she's just another old lady in just another haunted house. ♦

Winchester is not showing in any theaters in the area.