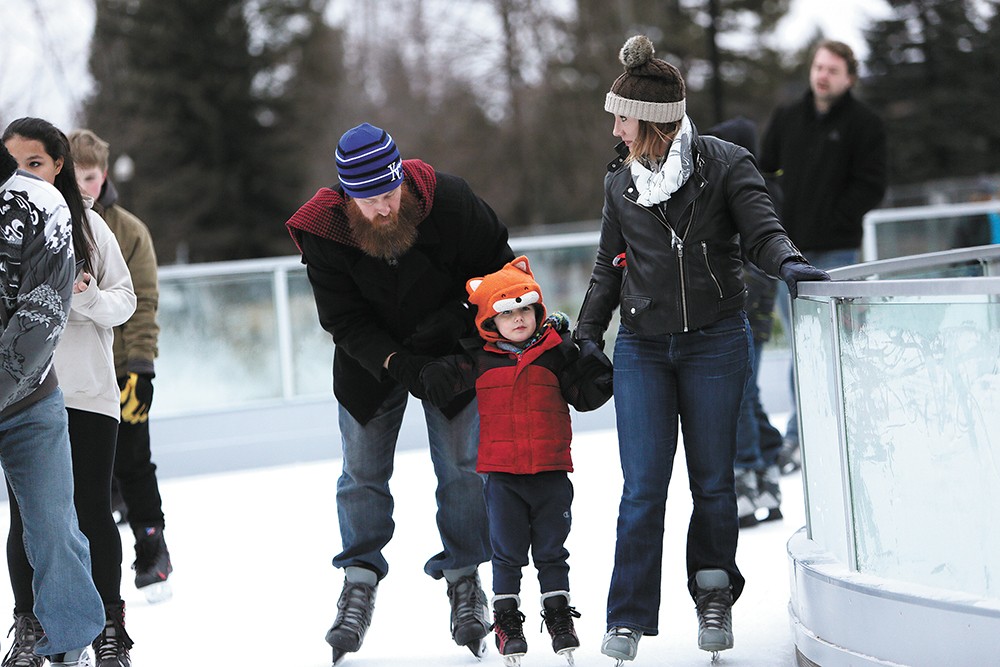 Beethoven's Ninth Symphony is widely considered the composer's most joyous work, so how better to ring in the new year than with the stirring sounds of ol' Ludwig delivered by the talented folks in the Spokane Symphony. The symphony's music director, Eckart Preu, is leaving at the end of next season, so consider this your second-to-last chance to celebrate a new year with the man who led the symphony into the refurbished Fox Theater a decade ago. The Spokane Symphony Chorale will be part of the show, as will soloists Jacqueline Bolier, Ann Benson, Christopher Pfund and Mark Walters, to help navigate the Ninth to the stirring "Ode to Joy" finale. 7:30 pm • $18-$52 • Martin Woldson Theater at The Fox • 1001 W. Sprague • spokanesymphony.org • 624-1200 (DAN NAILEN)

Consider this a kitchen-sink approach to New Year's Eve frivolity. If you're up for the trip to Nashville North and its huge dance floor, you can partake in some dance lessons (all the better for cutting a rug later in the evening), drink specials, party favors, a celebratory champagne toast and music from DJ Tom and live tunes from local country cat Luke Jaxon. If you haven't been to Nashville North, you're missing out on one of the uniquely Western clubs in the region, and promises of something called "whiskey table dances" certainly bode well for a memorable ringing in of 2018. Doors at 6 pm • $5 • 21+ • 6361 W. Seltice Way, Post Falls, Idaho • thenashvillenorth.com • 208-457-9128 (DAN NAILEN)

When you make the call to go out on New Year's Eve and brave crowds, potential nasty weather and all manner of nightlife amateurs having a drunken night out, you want to know you're going to have a great time. With Spokane band Super Sparkle, that's a guarantee thanks to the band's array of dance-floor-ready jams, energetic stage presence and predilection for making their live shows feel like events rather than simple concerts. You can bet the sparkles will be flying, among other shenanigans, when the band headlines the Bartlett on New Year's Eve. Blake Braley opens the show. $8 advance/$10 at the door • 21+ • The Bartlett • 228 W. Sprague • thebartlettspokane.com • 747-2174 (DAN NAILEN)

In a move that organizers hope will boost attendance to Spokane's community New Year's Eve celebration, nearly all of this year's First Night events have been moved indoors. Those heading to the all-ages event (which also offers activities for the 21+ crowd at Hotel RL at the Park, the Doubletree and the Davenport Grand) can rest easy over parking downtown on one of the busiest nights of the year, as the WSU Spokane campus is offering free parking and shuttles to and from participating venues. And while most of this year's events — like dancing for the liquor-legal crowd, along with plenty of kid-friendly performers, artists and activities — are out of the cold, attendees can also enjoy free ice skating on the new Riverfront Park ice ribbon, as well as a dance party in the INB Performing Arts Center breezeway leading up to the big midnight fireworks show. You can still purchase admission buttons in advance for $15, both online or in person at select locations. Day-of admission is $18, and kids under 10 are free with an adult. 7 pm to midnight • Locations vary around downtown Spokane • Find the complete schedule, event map and other details at firstnightspokane.org. (CHEY SCOTT)

Don your most festive, sparkling attire and make plans to ring in 2018 with a full belly after dining at one of the special NYE dinners being hosted at some of the region's finest food establishments. Reservations will likely fill up fast, so make sure to make yours soon. There are many options for your New Year's Eve dining, including a special five-course menu at the Melting Pot Spokane served from 4-9 pm. Another on our list of suggestions is the New Year's Eve tasting menu at Santé Restaurant & Charcuterie for $95/person. Choose one of the two six-course menus being served that night, which include a glass of wine or a cocktail, and a glass of champagne. Reservations can be made by calling 315-4613. Those looking for a more casual atmosphere can consider reservations at Zola's NYE Party. Tickets are $10/person for unreserved seating, and include party favors, a champagne toast and live music. The popular downtown bar's various private rooms are also being rented to parties of various sizes as a VIP option. Check Zola's Facebook page or call 624-2416. (CS)

If sitting at home with a gaming controller in hand is more your style, consider the Nerd Year's Eve Party at new Spokane Valley gaming bar GeeksNGlory. Beyond free access to the venue's insanely expansive library of console games to play with friends and other friendly local gamers, GeeksNGlory is offering drink specials, prizes and a cosplay contest for the most devoted gamer fans out there. 4 pm-2 am • Free admission • 21+ • GeeksNGlory • 6710 E. Sprague • Details at bit.ly/2p65EXm (CS) ♦

The original print version of this article was headlined "Goodbye, 2017!"

Ditch those Christmas trees and ring in the New Year, Pavilion style

By Mike Bookey and Chey Scott