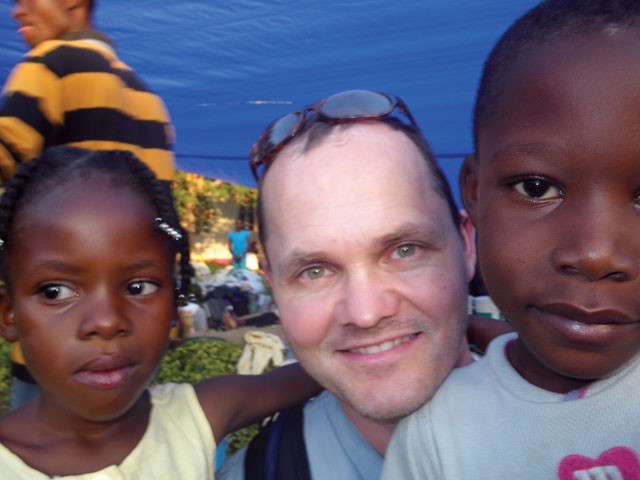 Six days after a 7.0-magnitude earthquake ravaged Haiti, Dr. Mathew Rawlins sat in the middle of a Port-au-Prince intersection, scanning his surroundings.Casualties, everywhere.

“Coming out of the woodwork,” he recalls. “That’s what was impressive — you didn’t have to look for people that were injured. They were just all over.”

A general surgeon for Rockwood Clinic and trauma specialist for Sacred Heart Medical Center, Rawlins belonged to a group of physician volunteers associated with the Church of Jesus Christ of Latter-day Saints.

“The easy part is leaving work and your family for a week and showing up,” says Rawlins. “The hard part is figuring out how to help once you’re there, because there’s no infrastructure.”

The real heroes, says Rawlins, were the people already working in Haiti trying to establish it. He mentions Paul Farmer, a medical philanthropist and infectious disease doctor from Harvard — residing in Haiti since 1984. “This guy could be living a really comfortable life, but he’s been down there for 25 years just because he saw a need,” says Rawlins. “We need to be bigger and more grand in our scale of how we can help. Going down for a week is huge, but it’s nothing like what other people are doing. They’ve been down there for the long haul, setting up something sustainable.”

Rawlins’ group had just a week to set up a clinic. Sterile supplies ran dangerously short, and there was little anesthetic. Rawlins was forced to use the same gown for at least five patients. A number of amputees had developed dangerous infections and were severely ill or delirious as a result.

“Most of these injuries were the kinds of things where, if we had been there immediately, it would have been treatable,” says Rawlins. “But due to neglect, and no care available, we were doing amputations — and it was just horrendous.”

Having to provide what he considered sub-par care due to primitive working conditions was nightmarish for Rawlins. But a glance at the courtyard outside, filled with dying people, reminded them all: The group was doing the best they could with what they had.

What really impressed Rawlins was the stoicism and altruism of the Haitian people.  He recalls the team’s interpreter, who waited until the end of the day to politely ask if a doctor could examine his cut. The “cut,” as it turned out, was a considerable scalp laceration — five inches across — casually concealed under a bandana.

“He had been like that all day,” marvels Rawlins. “And at the end of the day, just goes, ‘Oh, and by the way, could you look at this?’ To us, something like that would have been a huge deal.”

But despite the horrific scenes shown on TV, Rawlins says there’s another facet to life in Haiti, even after the earthquake. “When you see it on places like CNN, it looks like hell,” he says. “People are in pain and there’s destruction all over. But when you get there, and you see people survive it, you enter that survival mode with them and become buoyed up by their resilience,” he says. “If you look at the background, you see inconceivable poverty and horrendous conditions. Yet these people eke out a life. They laugh and smile and enjoy parts of life — even a week after an earthquake. It was horrendous, yet amazing.”

When you see images of Haiti on TV and in newspapers — crumbled, collapsed and desperate — it’s hard to know how to help. Do they need cash? Clothes? Shoes? When a country topples in a matter of minutes, what can possibly help?

Cash. Across the board, national and local relief organizations are saying that cash — small donations and huge sums of cash — is what Haiti needs most.

“Some people want to drop off food and clothes — tangible items,” she says. “But in this situation, it’s just too expensive for us to transport it.”

Bradley says that monetary donations can be dropped off at the Salvation Army office or in one of the red kettles they’ve placed at both local Salvation Army stores. (Or visit salvationarmyspokane.org.)

“There is very, very little infrastructure left in Haiti, and there is no place to store or sort items,” she says. “Something as small as a $10 donation can provide a family with two water cans to store clean drinking water, basic first aid supplies or a blanket appropriate to the climate.”

You can send checks to the local Red Cross (315 W. Nora Ave.) or text “HAITI” to 90999 to make an automatic $10 donation to the organization’s relief efforts.

National organizations have kicked off some unusual fundraisers — including the compilation album you can purchase a la Radiohead’s In Rainbows (meaning, pay whatever you’d like) at musicforrelief.org. It’s an album with songs by Dave Matthews, Alanis Morissette and many others, and 100 percent of the proceeds go to Haiti.

If you’ve got more cash to spare and want to know specifically where your money goes, consider donating to National Nurses United (nationalnursesunited.org). A donation of $250 will send a nurse for a day;  $2,500 will keep him or her there for nearly two weeks.

And if you’d really like to send tangible items, check out store.causecast.org/huffingtonpost, which lists specific packages and kits that can be sent to Haiti via organizations like Mercy Corps and Partners in Health. For example, World Vision offers $100 Family Survival Kits: boxes of life-saving essentials like water purification tablets, temporary shelter materials and cooking sets.