For Coeur d’Alene’s Dr. Mike Ettner, when the earthquake hit Haiti, it was like an old friend needed help 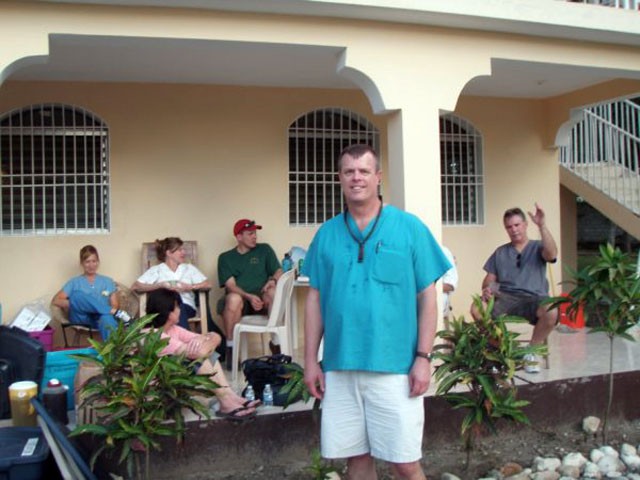 Dr. Mike Ettner with other medical volunteers in Haiti.

Ever since 1964, when he first read about Nobel Prize winner Albert Schweitzer, Dr. Mike Ettner, emergency department physician from Kootenai County Medical Center, wanted to be a missionary doctor. It is the only dream he’s ever had. He had planned on spending his life saving the sick and injured in Africa.

He and his wife lived with the Maasai tribe in Kenya. They spent three years in Micronesia. And 25 years ago, he flew to the Dominican Republican. There, he met Haitian sugar cane cutters. And he fell in love with the Haitian people.

“I discovered Africa was 600 miles off the coast of Florida,” Ettner says.

For the last six years, Ettner’s been flying to Haiti to put on clinics with the Haiti Endowment Fund, a mission organization focused on food, medicine, water and ministry. His trip in January was scheduled long before the earthquake.

The masks the translators wore weren’t for disease. They were for the smell — foul, thick, choking the air — the smell of rotting flesh, of infected limbs needing amputation, of infected stumps needing yet another amputation.

Two hundred injured and dying people were packed into 150 beds. The flies were thick, swarming and buzzing in the blood and pus. A man stomped through the halls with insecticide, spraying swarms, and spraying patients. Rats — big rats— skittered past patients’ pads. There were no bathrooms.

And yet, a 5-year-old boy, in traction and a full-body cast, awaiting amputation of his leg, was smiling. Holding the transistor radio Ettner gave him, he laughed, refusing to cry.

“He looked so much older than children his age,” Ettner says recalling his trip. “He might even feel he’s fortunate.” For the first time, people were giving him gifts. For the first time in his life, he was being fed consistently.

Suffering, even suffering on this scale, is hardly new to Haiti.

People in Haiti rarely live past the age of 48, Ettner says. “Besides Bangladesh, I can’t think of any other countries that are just actually hopeless,” he says. He hopes an ethical leader will rise from the rubble, but he doesn’t foresee that Haiti will ever escape its ceaseless cycle of poverty and corruption.

Political sleaze extends to the hospital. The Hinche hospital is ruled by Dr. Prince, a general surgeon and one-time ally of former president Jean-Bertrand Aristide. Before the earthquake hit, he was under investigation for murdering a fellow doctor.  But he’s still the one holding the hospital’s keys.

At 5 pm sharp, every night, Prince shut down the generators. “He would lock the operating room so we couldn’t get in,” Ettner says. No operations were allowed on Saturday or Sunday.

Prince claimed it was because he didn’t have enough fuel to run the generator longer — but Ettner says more than enough fuel had already been donated. He believes that Prince was trying to sell the extra fuel, trying to further consolidate his power.

“There were people who hadn’t been operated on,” Ettner says. “Three weeks from the earthquake, they’re still waiting to have their femur fractures fixed, and burns grafted.”

Prince would also lock the supply cabinets, he says, forcing Ettner to stockpile supplies on a gurney. “He considers me his close friend,” Ettner says. “I wanted to tell him how evil he was.” But Ettner couldn’t. He needed to fake camaraderie, to avoid worse consequences.

“The people are good,” Ettner says. “The people, when they become politicians, are evil.”

Ask a Haitian how they’re doing, and you’ll hear, “Pa pi mal,” Ettner says.  Literally: “Not a little bit bad.” The implication: It’s bad, but it can get worse. It can always get worse.

In that filthy hospital in Hinche, Ettner looked upon the dual faces of Haiti. In the hospital administrator, he saw the the corruption that’s strangled Haiti for centuries. In the smiling, suffering boy with the mangled leg, he saw resilience and — if not hope —perseverance.

“These people are worth rescuing and lifting up,” Ettner says. “What other people could stay under rubble for 17 days and still be alive?”