Local existential rockers B Radicals on their new album, current events and why they're not exactly hippies 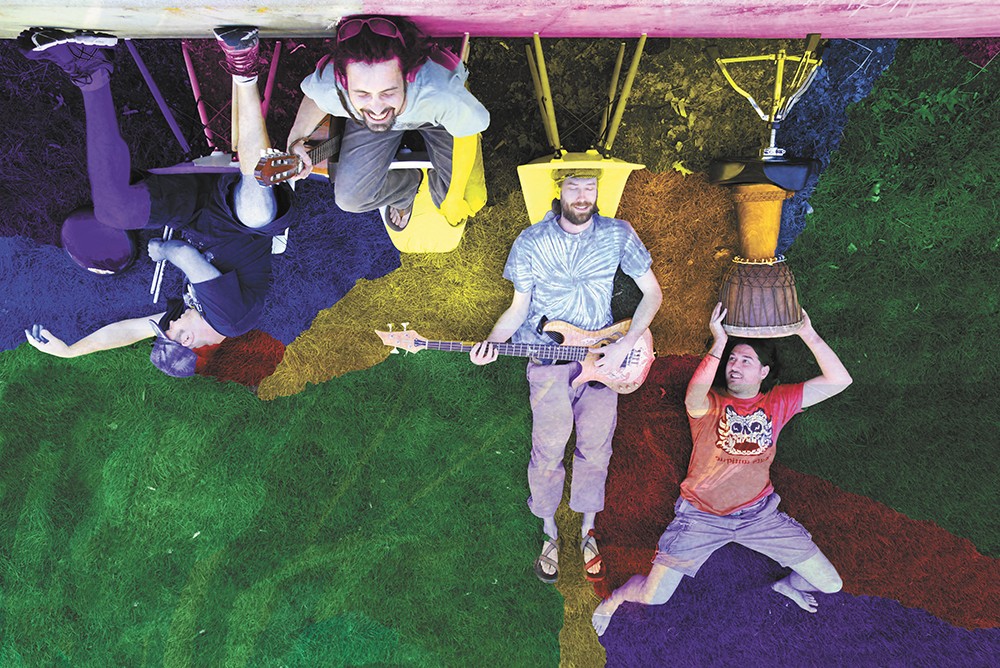 Sunday afternoon — after many Spokanites had finished huffing and puffing through Bloomsday — B Radicals met in the unfinished basement of Little's mostly empty South Hill duplex for one last rehearsal. It's where the four-piece have assembled on a weekly basis for many of their seven years together, crafting their jam-band sound by listening hard to one another.

This week, singer/guitarist Little moves north to Sandpoint. While their practice space is changing (probably to drummer Lancer Roethle's home just outside Spokane), the band isn't going anywhere. After all, they're throwing an album release party Saturday.

"We're still not over Brad moving," says bassist Konrad VanDeest with a smile.

"But he's already put so much energy into this band, we believe him when he says he'll make the drive down for weekly rehearsal," adds David Egly (percussion and synthesizer).

With a man on the inside in Idaho, it's easier to expand their already devoted fan base. Here in Spokane, they're part of a peace-loving group of musicians who often play at the Red Room Lounge or the Big Dipper. Groups like Real Life Rockaz, Smiles Davis, the Tone Collaborative, Moksha (VanDeest is also a member) and Quarter Monkey by no means sound the same musically, but in their worldview they get each other.

Down in this basement, they mention people like Jimi Hendrix, James Brown and Bob Marley as influences both musically and in life. The band speaks of feeling the vibrations, light versus dark, being ambassadors for peace and how music causes them to feel present in this world. It's not trite for them; it's not fake. They truly believe that music can change the world, with a sincerity that makes you want to believe too.

"There's so much happening right now, with the Baltimore riots and unease around the country," Egly says. "But if you don't f---ing love humanity, that's messed up. There's just so much to love."

B Radicals wouldn't call themselves hippies, exactly — especially not in a the stereotypical sense. Yet three of them sport long hair, and their collectible band T-shirts come in five shades of tie-dye. Just last weekend, the crew attended a barter faire party in the woods, which featured banging on drums and dancing around a campfire into the early morning. And since 2009, they've never missed an Earth Day celebration at Riverfront Park. This year was especially memorable, as the band ended up playing their set during a nearby protest against Avista energy.

"We've been described as Tool for hippies," VanDeest explains. "And I'm by no means offended by that."

In preparation for the release of their debut album Free Your Imagination: A Sonifesto (a made-up term meaning trying to reach things you can't express), recorded with excellent clarity at Amplified Wax last Memorial Day weekend, the quartet coined the term "existential experimental rock/psychedelic/funk" to try to explain their sound. But that doesn't do them justice.

A B Radicals song —with titles like "Chunky Smooth" and "Go Go Gadget Funk" — is like an extensive sonic ride through the musical universe. It'll start out harmonious and crunchy, blur into a slow groove, then pick back up into a bluesy beat that makes you want to move.

"It's like busting a dam; we're trying to open up every possibility," Roethle explains.

Although those jam-band sensibilities are there, the songs are quite structured. There are certain spots reserved for improvisation, but as Egly says, they're not just making things up on stage.

Over the years, the band has stayed at four members but grown in instrumentation, filling in gaps where other musicians could have been added. Roethle's drum kit is especially a sight to behold — not quite Neil Peart level, but the array of cymbals is impressive. They keep pushing themselves to write better and more unexpectedly, and currently have enough songs to fill two more albums. As the music has matured, so has the band, with marriages, babies and real jobs.

Their upcoming show is a celebration of all of that and, as always, will be one big party. They're inviting their friends to join them on stage. Hula-hoopers, burlesque dancers, performance artists and optimistic music will fill the Big Dipper with the affirmation of life.

"We want people to leave from hearing all of that crazy, positive energy on our stage and go home and paint or dance or climb a mountain," Little says. ♦