In October of 2014, the Spokane City Council had passed an ordinance codifying an existing Police Department policy into law, banning Spokane city officials from asking about immigration status. Proposition 1 was an attempt — ultimately unsuccessful — to undo the policy by voter initiative

But at the debate, McMorris Rodgers didn't answer why she had signed the initiative, using her answer to focus on an additional question Navarrete asked about families being detained at the border.

Back in 2015, we asked a similar question, and got a generic answer about the value of the democratic process:

"Citizen involvement is the cornerstone of our government, and I applaud the work of local activists who devote their time and energy to issues important to them. If this petition is successful, the decision will go to the voters this fall."

So at the end of an interview today, we pressed McMorris Rodgers: Why did she support Proposition 1?

“I believe it needs to be a partnership," McMorris Rodgers says. "We need to have a partnership between local law enforcement and the federal government when it comes to enforcing our federal immigration laws.” 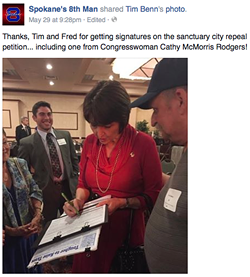 Yet her signature back then put her on the opposite side of her former chief of staff, Mayor David Condon. Condon opposed the ordinance.

“I would vote against it as it’s currently stated,” Condon said about the initiative in 2015. “This has been the policy, remains the policy and I fully support that practice and policy within our police division. Immigration status is not a primary local law enforcement function and is not something our police officers focus on.”

Similarly, Police Chief Craig Meidl said that crime committed by unauthorized immigrants is almost nonexistent in the Spokane area. The bigger problem is convincing refugees and immigrants to trust the police, he told us.

"My understanding is that [the ordinance] was a step toward making Spokane a sanctuary city," McMorris Rodgers says.

And how does she define sanctuary city?

As we detailed at length last year, "sanctuary city," is an amorphous phrase with a number of different meanings. Spokane fits a broader definition used in 2012 by Mitt but doesn't fit most other definitions, including any of the definition that could put public funding in peril.

Condon, at least, has been clear that he doesn't see Spokane as a sanctuary city.

“Spokane is not a sanctuary city, although it has always been a city that works to ensure that all of our citizens feel safe, welcomed and valued," Condon wrote in a 2017 statement.

She is misinformed and we never once stated that we were on our way to becoming a sanctuary city. Whether our police officers ask status or not has zero to do with cooperation between agencies. It has everything to do with the fact that people will not call the police if they are afraid the officer is going to ask their status. It is too bad that Cathy sided with the racists in our community.

Lili Navarrete, the woman who asked the question at the debate, says she actually would like Spokane to become more of a sanctuary city. She says she doesn't want immigrants or refugees to live in fear.

"I am hoping, yes, that it will be a sanctuary city," Navarrete says. "People who come here as refugees, I want them to feel safe in Spokane."

Navarrete says that if McMorris Rodgers spent more time with the immigrants and refugees in the Spokane region the congresswoman would understand how valuable their presence is here.

On the one hand, she decried the Trump administration's family separation policy. But on the other hand, she wants the government to address the family separation by detaining children together with their parents suspected of immigration violations, instead of by releasing families until their trials.