There's been an unusual, if only anecdotal, uptick recently in illegal dumping of hazardous materials, the Washington State Department of Ecology reports.
click to enlarge 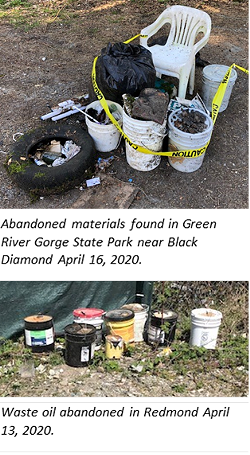 Courtesy Department of Ecology
Photos show two illegal dumps of different hazardous materials, which were left at public places. Different state agencies say they've noted an uptick in people leaving their garbage on public property, and Ecology notes that hazardous materials in particular need to be safely and properly disposed of to avoid creating problems in nature.


The state remains largely shut down under Gov. Jay Inslee's Stay Home, Stay Healthy order, and due to that, some hazardous waste disposal sites such as the Waste to Energy site in Spokane have been closed temporarily. Since the order took effect, Ecology has received a few reports of illegal dumps in public parks and on public property.

"Normally we don’t really get a lot of people illegally dumping stuff. That doesn't happen all that often," explains Ty Keltner, an Ecology communications manager. "But then we got two within the span of a week, and that’s a little concerning."

Even small amounts of some chemicals leaking can be pretty devastating.

It's not just hazardous materials, which are reported to Ecology's spill response team, either, Keltner says. Other state agencies that manage roads and public spaces have also anecdotally noted more garbage and litter recently.

At least along the state's roadways, it's likely that any litter could stay there for a while, as the state's adult litter crews, which typically start in February and work throughout the summer to remove debris from medians and the sides of highways and interstates, haven't been able to work under the stay-home order, explains Dave Bennett, communications manager for Ecology's Solid Waste Management program.

The adult crews were only able to work for a few weeks this year before the stay-home order took effect.

"The first couple months of the 'litter season,' if you will, are the most important, because we’re coming out of winter and there’s already a lot of debris on the roads, and we still haven’t gotten to a lot of the illegal dumps," Bennett explains. "With the governor’s proclamation, that took our crews off of the road."

Due to the shutdowns, the department also won't be hiring its usual litter crew of high schoolers for summer, known as the Ecology Youth Corps, Bennett says.

"Normally we would have those crews hired by now and be looking at maybe getting some training in," Bennett says. "But with the schools closed — who we work with very closely in the hiring process — it’s been impossible to hire, so we did suspend those for the season."

Last year, litter crews picked up and removed more than 1.2 million pounds of litter from about 5,000 miles of roadway from the spring through the fall.

Spokane, Grant, and Franklin counties had the most illegal dump sites in that region, with 186 in Spokane County, 163 in Grant, and 111 in Franklin.

While litter is still collecting in some areas, Bennett says, Ecology will be ready to take surveys of where the refuse is so it can be removed once it's safe for crews to be out at work again.


"This is a tight spot, we’re not comfortable not being out there doing this work," Bennett says. "We understand there is a lot of debris, but one of the first things we’ll be focusing on when our crews get back out there is the illegal dumps."

In the meantime, don't litter.

If you do have leftover motor oil, paints, cleaners or other hazardous chemicals, Ecology urges people to hold onto it safely in a shed or garage until it can be properly disposed of at a hazardous waste management center nearby.