Since legalization, interest in a pot breathalyzer is high. Researchers are trying to find a way to pick out stoned drivers 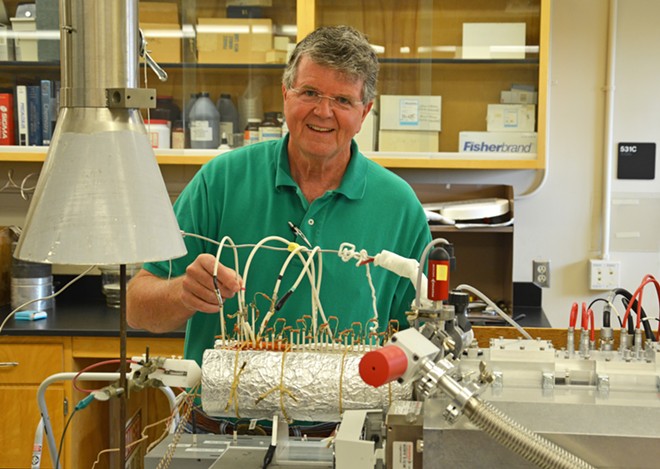 Herb Hill, a professor of chemistry at Washington State University, is helping develop a breathalyzer for marijuana.

could be the solution to a problem that law enforcement has increasingly faced since marijuana has become legal in Washington state: detecting impaired drivers.

Nick Lovrich, a now-retired political science professor, had been working with data from the Washington State Patrol on traffic stops. He realized that law enforcement was generally good at picking out impaired drivers, but lacked a easy way to determine the cause of impairment, which can lead to a costly, drawn-out process.

Lovrich remembers Herb Hill, a professor of chemistry at WSU, offering a possible solution: a portable breathalyzer, like those used on drunk drivers, that could swiftly determine the amount of THC (the chemical that produces marijuana's psychoactive effects) present in a driver's system.

Although lawmakers and law enforcement have expressed interest in the research, which may be field-tested in Spokane in the coming year, it'll take much more testing before portable breathalyzers become part of roadside stops.

"You're typically taking hours for an investigation," he says.

Sharpe says that the initial steps to identifying a stoned driver aren't too different from identifying a drunk driver: Someone is pulled over and the officer's suspicion is aroused by a telltale smell or the driver's delayed response. At this point, the officer will initiate a roadside sobriety test.

If the officer suspects the driver is stoned or using other drugs, the officer will call in a Drug Recognition Expert, someone trained to identify if someone is too impaired to be driving and can request a blood test to determine the level of impairment, which requires a warrant from a judge, says Sharpe.

Washington state's legal limit for pot is 5 nanograms per milliliter of active THC in the blood. The whole process of calling in experts and getting blood tests, Sharpe says, can be even more time-consuming in more remote areas. The suspect is metabolizing the drug the entire time, meaning the blood test may not reflect how much THC was in their system when they were driving.

"It's never going to be 100 percent because there are so many variables," he says of the current method.

State Sen. Mike Padden, a Spokane Valley Republican who chairs the the Senate Law and Justice Committee, says that a pot breathalyzer could readily determine if a blood test is needed in the first place. He says the technology is "very important," noting that since pot has been legalized the number of impaired drivers in the state has increased.

Numbers from the state suggest that impaired driving is becoming a problem. The Washington Traffic Safety Commission released data last year showing that the number of drivers involved in deadly crashes who tested positive for active THC increased from 65 percent in 2013 to 85 percent in 2014.

The device being developed by Hill will rely on technology similar to that used in airports to detect narcotics and explosives. The way this technology works, says Hill, is by creating a vapor of the substance, then using an electric field to observe how fast its ions move. Ions from different substances, he says, move at different speeds, allowing observers to detect the presence of THC. Before the device is ready for prime time, Hill says that it needs more testing.

"The first thing we want to try to do to is see if it can detect THC in breath, period," says Hill. Over the spring, he says, he and other researchers will test the technology to see if it correlates with the results of blood tests. The next step, he says, is field tests by police officers in Spokane that could happen next year.

Other marijuana breathalyzers are being developed: Vancouver, British Columbia-based Cannabix Technologies is working on a device based on similar technologies. Colorado-based Lifeloc Technologies Inc., maker of ubiquitous alcohol breathalyzers, is developing a similar device for pot.

Kathleen Stitzlein, a biomedical engineering doctoral student at the University of Akron, is working on a marijuana breathalyzer that will examine a driver's saliva to determine if they've recently smoked pot. Stitzlein says that the problem with using ions for detection is that they may not reflect how much pot is actually in someone's system, as the THC may have been metabolized before being tested.

Getting an accurate reading is a concern for law enforcement.

"We are definitely interested in seeing it," says Sharpe. "But we have to see what it's capable of first. A false negative and a false positive are a concern because we don't want to err on a device that tells us wrong information."♦