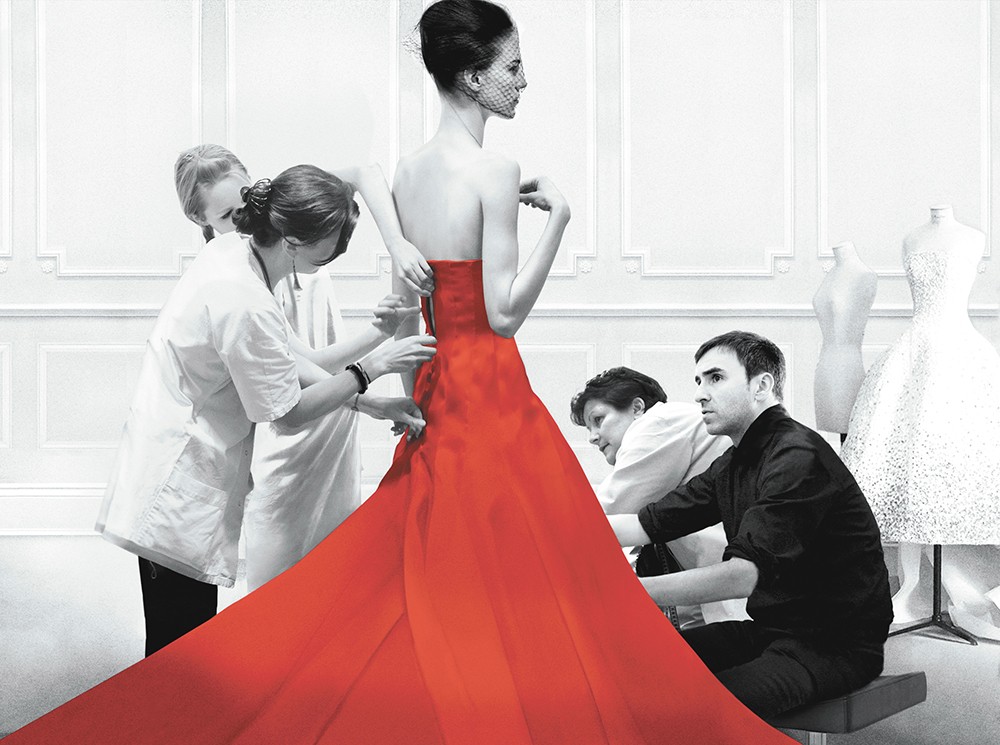 Discover the secrets of the fashion world in Dior and I.

A piece of Dior haute couture

to hang in the closet is probably not in most of our futures, but this enthralling documentary allows viewers to finger the hem, so to speak, of some grand designs indeed. The film chronicles the 2012 arrival of new artistic director Raf Simons at the Parisian House of Dior and the mere eight weeks he had to produce his first collection for an audience of fashionistas and their perfectly manicured talons.

While Simons — a soft-spoken Belgian who's obviously stressed out of his gourd — is the film's entry point, Dior and I's net scoops up a multilingual consortium of creatives and craftspeople toiling away at so much tulle. (Incidentally, the seamstresses wear heels. So chic.) The language barrier borders the Babel-esque; it's a surprise source of humor, too, as when a translator is terrified to pass along an Italian tailor's request to the French-speaking chief seamstress, knowing she'll be furious at the added work.

Onto this fly-on-the-wall portrait of an atelier at work, writer/director Frédéric Tcheng appliqués an ethereal narration drawn from founding designer Christian Dior's own autobiography, Dior by Dior. (Tcheng employed a voice-from-beyond-the-grave technique less successfully in 2011's Diana Vreeland: The Eye Has to Travel, which he co-directed.) The narration is a nifty double-tasker: both contextual aid and artistic statement. By using Dior's personal musings — on founding his fashion house, his philosophies on life, his dealings with the press — Tcheng neatly establishes Dior's legacy and, consequently, how very high the stakes are for Simons, while also prepping the audience for mirroring points in Simons' own narrative arc. The young designer didn't benefit from the same cheat sheet, admitting he stopped reading Dior's memoir on page 15 because the similarities were "too weird."

The doc concludes with the debut of Simons' collection, a spectacle I won't spoil for anyone without a Vogue subscription — only to say that Tcheng, cinematographer Gilles Piquard and editor Julio Perez IV assemble a flat-out thrilling representation of a logistically tricky catwalk/backstage and an emotionally draining day. Dior and I's only misstep is saved for the final credits, which roll over a black screen with random bursts of blinding light meant to mimic camera flashes. No matter the season, seizure-inducing is never a good look.♦

Dior and I is not showing in any theaters in the area.