Highlights from the past 25 years

Young Kwak
Courtney McKinnie at the gravesite of her son, Isaiah Wall, who died 11 days after he started working as a drug informant. Wall's life and death became the subject of a cover story on Nov. 17, 2016.

The exact numbers are lost to history, but we can safely declare this: 25 years have yielded tens of millions of copies of the Inlander, more than a billion pages and, approximately, a gazillion words. Not bad for your favorite local paper.

Some of the words were no doubt consumed with passing matters of the day — say, with details of upcoming events or with forgettable reviews of forgettable movies — but a great portion of that work went into telling important stories about our community.

On those billion pages, the Inlander has revealed the people and things shaping the present (and future) of the Inland Northwest, covering growth, politics, corruption, race, creativity, war, violence, education and, cuz we're in Washington, legal weed.

Here, then, are some of those memorable stories from our archives, ones that we believe speak to the values of the Inlander as it's covered this place we call home.

From the very first cover story, in the inaugural issue of the Inlander, McGregor established what would become a hallmark of the paper: a deep-dive look at the direction of our community was heading — in this case, how growth was changing things for good and ill.

Days before the 1994 election that would become known as the Republican Revolution, McGregor offered an analysis of the race between Speaker of the House Tom Foley and giant slayer George Nethercutt. "Like Ronald Reagan, Nethercutt seems to be a Teflon candidate," McGregor wrote. No one could have predicted that 20 years later Nethercutt would end up writing a monthly column in the Inlander.

Strickman explored a new book, River, whose author claimed to know the true identity of the Green River Killer, a Spokane man named William J. Stevens II. The author was wrong, Stevens was cleared, and another man, Gary Ridgway, would later be convicted in the crimes.

Cannata's cover story about how black people were faring in Spokane was coupled with first-person essays, including one by an attorney Stanley Perdue, who wrote this: "I differentiate between someone who intentionally wants to hurt me and someone who through inadvertence hurts me. Not everyone agrees with that analysis, but it works for me."

Heil checked in on the sad, riveting disappearance of Don Hutchings, a neuropsychologist from Spokane, who had been abducted by Islamic separatists two years earlier while hiking with his wife in Kashmir. His body was never recovered, and the State Department issued a death certificate for him in 2001.

Cannata examined the controversial proposal, put forth by then-state Sen. Jim West, for Washington State University to swallow Eastern Washington University, at least as far as the higher ed services in the city of Spokane. It didn't happen, and the schools would later team up for Spokane's University District.

The reporting duo dug into Spokane's puppetmasters, the ones holding the keys and pulling the levers controlling the Lilac City. High on the list were Betsy and Stacey Cowles, heirs to the family dynasty, with control over KHQ and the Spokesman-Review. The cover package also identified some "rising stars" to watch, including Bobby Brett with the Spokane Chiefs hockey, and state Sen. Lisa Brown, who is making a run for U.S. Congress this fall.

Egan introduced us to the Solodyankin family, part of an estimated 10,000 refugees from the former Soviet Union who resettled in Spokane since 1989. It was certainly an adjustment, Yelena Solodyankin told Egan: "I imagined America from the movies. And when I came here, I realized you start from the bottom. I cried for two days."

Fritz featured Gayla Benefield and her unrelenting fight to bring to the world the full story about Libby, Montana, and the W.R. Grace plant that, for years, spread toxic asbestos over the community. It turned out that not only did the workers at the vermiculite mine get sick, but so did their children. As Benefield said then: "The common theme is the companies always knew and had no regard for the people."

Bowen used 2002's "sociological treatise du jour" — Richard Florida's The Rise of the Creative Class, and How it's Transforming Work, Leisure, Community and Everyday — as a starting point to assess Spokane's own creative assets. One local thinker had a dim view of things: "We kind of revel in our mediocrity, as if we can't change our situation." However, using Florida's Creativity Index, Spokane ranked 21st out of 63 medium-sized cities.

McGregor sized up the lessons from Spokane's "civil war," waged for seven years between two factions fighting over the future of downtown Spokane. On one side, there was "the establishment" and Betsy Cowles, leader of the downtown mall project; on the other, you had "the reformers," Steve Eugster and critics of the controversial parking garage. One conclusion offered by McGregor: "It may be naive to think that everyone around here could ever pull on the same rope, but it's also naive to think that if Spokane doesn't get its act together, especially on the economic development front, it will somehow thrive in spite of itself."

I had moved back home to Spokane two weeks earlier — after my mom was diagnosed with cancer — when a 16-year-old boy took a gun to Lewis and Clark High School, planning to die in a shootout with police. As a freelance writer, I was instantly drawn to the story, to say nothing of the fact my brothers went to that school. Through persistence, and some luck, I got the goods — the first interview with the boy, who survived despite being shot in the face by police; the first interview with the police negotiator, who had spent an hour and a half trying to talk the kid down; and the first real insights into what had been going through the kid's head. (Turns out, he had been hearing voices every day for more than two years.) That article showed me what could be done at the Inlander — telling the whole story, not just some disparate parts — and it would be the opportunity to pursue high-impact journalism that would call me back to Spokane, in 2008, to work full time for the Inlander. 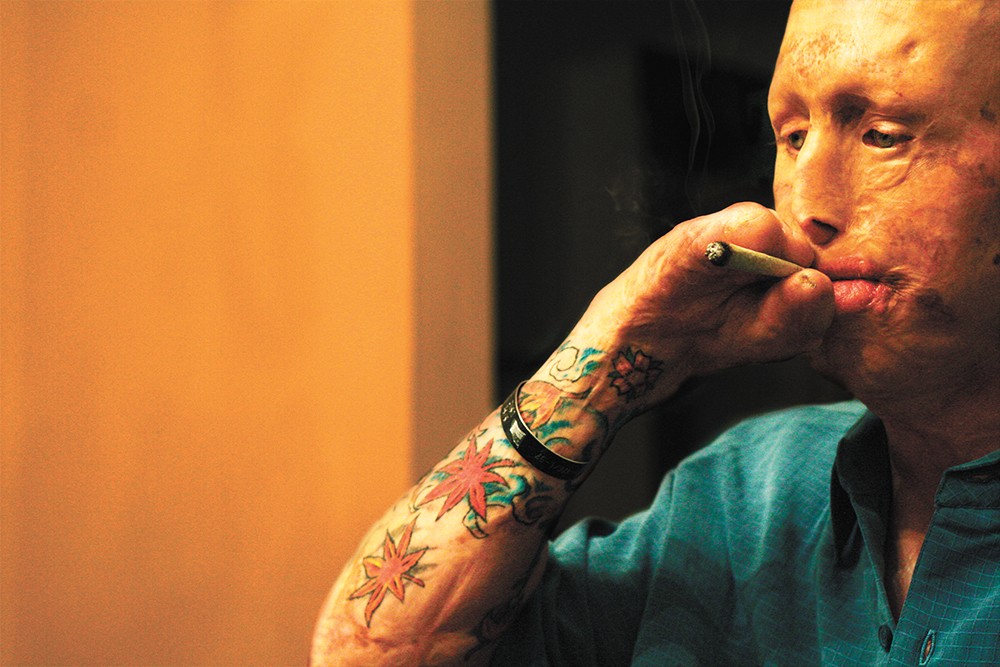 Chris Bovey photo
A cover story on Dec. 4, 2008, examined the state of medical marijuana and included details of David Van Scyoc's experience with it.

Sottile profiled 21-year-old Chris Rentz, who, through a twisted turn of events, found himself behind bars over a $23 tank of gas. Once inside the overcrowded Spokane County Jail, he'd be locked up with a violent offender who killed Rentz. It was the end of a life barely begun. "He wanted to get his GED, get his license and pay his fines so he could leave here and be something," his sister told Sottile. "I think he pretty much felt like he was stuck his whole life."

Writing an epic story of brotherhood, Taylor catalogued the experience of the Idaho National Guard soldiers in Iraq who spent a chaotic year dodging bullets and bombs. The fog of war was undeniable. As Taylor wrote, "Almost every local soldier encountered the ambiguous nature of not knowing who's who or where their loyalties lie in Iraq."

Smith brought a large dose of skepticism and reportage to his report on downtown development, a year after the condo craze initially overtook Spokane. Had it been overblown hype? Not entirely, Smith's story concluded. "Though they're more guarded... developers say they foresee steady growth ahead. They'll take it with or without the craze."

Deshais explored how medical marijuana — 10 years after Washington legalized it — remained in murky territory, leaving patients and proprietors in legal limbo. His story focused on the experience of David Van Scyoc, who lived in unrelenting pain after being caught in a fire at age 2. "Using cannabis, it distracts you. ... You can still feel the pain. You just don't think about it as much."

Baumgarten used the publication of Jess Walter's latest book (at the time, The Financial Lives of the Poets) to go behind the scenes with Walter, into his writing studio, to a poker table surrounded by close friends and to the creative process that Walter had developed. "What gets Walter through," Baumgarten wrote, "is the belief, honed by trial and success, that time, patience, and determination can break all blockages."

This was the fifth piece in a 2010 series we dubbed the Injustice Project, and this particular report examined a spate of fatal police-involved shootings, beginning with the death of a 74-year-old pastor in Spokane Valley named Wayne Scott Creach.

Deshais profiled the city attorney whose zealous defense of the police — especially after a violent beating of 36-year-old unarmed man named Otto Zehm — led federal officials to accuse the attorney of leading a "shadow investigation" into the case. The primary officer involved, Karl Thompson, would later serve time in federal prison.

O'Sullivan went stomping into the woods of North Idaho in search of the elusive woodland caribou, with only an estimated 1,800 left in the world at the time. His attempt to see one in person failed, but he succeeded in capturing the high-stakes fight over the future of the dwindling caribou.

Jones explored Americans' love affair with the AR-15 assault rifle, the weapon of choice of homegrown mass murderers: "The AR-15 teeters at the center of the emotionally charged gun debate, at the intersection of civil rights and civil society."

This was the capstone piece in our mental health-focused State of Mind series; the 20-page resource guide included information on spotting and helping someone in distress as well as first-person accounts. It opened with a call to action: "We know the problems. Who's going to be part of the solution?"

Walters examined Idaho's abysmal efforts to get high schoolers to go onto higher education and how the dearth of skilled, educated labor was impacting the Gem State. "High-tech jobs are going unfilled and the solution ... means that a lot more Idahoans need to start getting college degrees."

Ryals succeeded in exposing how the Idaho State Police recruited a teenage drug informant who, in just 11 days, would end up dead. Citing an expert on the subject, Ryals wrote, "The reckless use of informants — leading to their torture or murder — often goes unnoticed... unless their families have the means to hire attorneys and see the cases through lengthy legal battles."

We at the Inlander invited women we know — writers, leaders, liberals and conservatives — to reflect on our national reckoning with sexual misconduct and power. Collectively, what they've produced was personal, powerful, heartbreaking and inspiring.

We dedicated five writers and space for nearly 9,000 words to explore 47 different ideas on how America could potentially reduce gun violence in the country. The article was reprinted in several newspapers across the nation. ♦