A rare opium pipe collection finds a home at UI 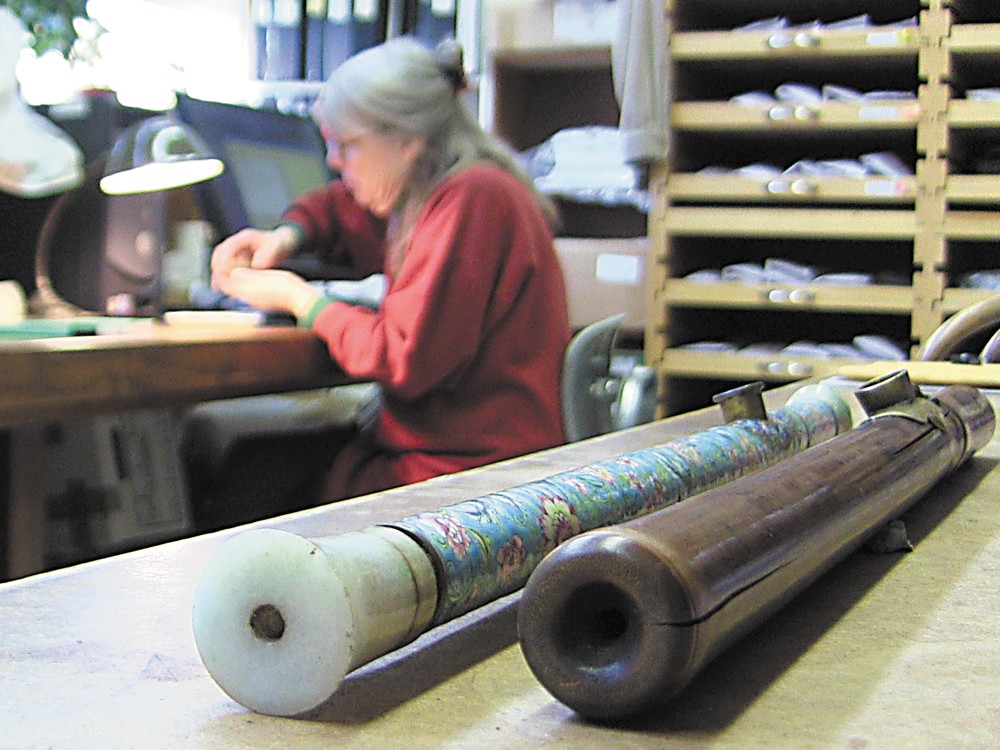 Eric Francavilla
An enamel-decorated opium pipe, recently donated to the University of Idaho, rests next to one made of bamboo as Priscilla Wegars catalogs other opium artifacts.

Since September, dozens of brown packages from destinations like Laos, Thailand and California have found their way to the University of Idaho’s Asian American Comparative Collection.

Their contents — flute-like tubes of wood, bone, glass, metal and stone — tell the history of a taboo subject in Asian culture: opium smoking.

Steven Martin, a 50-year-old former guidebook writer and self-proclaimed leading expert on opium paraphernalia and smoking, donated his 1,000-piece collection to the university this fall. Martin, a former opium user, doesn’t advocate using the drug, but he wants to share knowledge about Asian culture through the artifacts.

“Here was this practice, this vice, if you will, that at one time was very, very common … and has now been just completely forgotten as a result of it being outlawed and eradicated,” Martin said during a presentation to the Palouse Asian American Society in October. “The fact that nobody else seemed to know anything about it, this is what was really driving me.”

Martin chose the university as the home for his collection to thank Priscilla Wegars, volunteer curator of Asian American Comparative Collection, for a book she edited that informed his early years of opium research.

In 2003, Martin emailed Wegars, asking if the school would house the collection for researchers. Wegars received permission from Idaho Attorney General Lawrence G. Wasden for the university to own the paraphernalia, which is otherwise illegal. In the years that followed, the collection grew.

“There might have been a couple hundred things [in 2003],” Wegars says, “but he kept collecting.”

When the packages arrived at the university in September — with 10 times the amount of items she expected — Priscilla was a little overwhelmed. By early November, the packages filled the university archive room, which already held about 8,000 Asian artifacts from other collections. Martin’s collection was stacked under tables, against walls and in a safe the size of an industrial refrigerator.

With help from part-time assistants, Wegars has so far cataloged half of the collection, archiving items based on color, material, adornment, shape, features and purpose. The collection won’t be fully cataloged until 2013.

The university does not have a specific research objective for the collection, but once archived, other researchers can request access to it. For example, Wegars says the collection could benefit those studying archaeological artifacts, drug use, culture or art.

“I’m not here to say what we’re going to do with this,” she says. “The interest will drive the collection.”

Martin’s obsession with collecting opium paraphernalia began a decade ago when he bought a souvenir pipe to remember a trip in which he helped a journalist research the resurgence of opium in Laos. Many towns there had opium tents where tourists could try the drug, he says, despite anti-drug efforts in the region.

“They were just very rustic little huts,” he says, “and it would be one opium smoker, usually, acting as a host, and backpackers could come in and for a dollar or so could try it. And usually that’s as far as it went.”

But Martin’s obsession went further than the research and the one pipe.

“I was just looking at [the pipe] and I had what I like to call a ‘collector’s epiphany.’ I just suddenly realized that this was something very interesting … and I felt that I needed to learn more about it,” he says.

Martin was hooked. He began collecting pipes and other opium paraphernalia across Asia and the western United States. He scavenged antique shops, opium tents and eBay. He began smoking more, too.

“I think the majority of backpackers who went through and tried opium were very happy to try it once,” he says. “It usually involves a lot of vomiting.”

Smoking opium — a misnomer, because the drug is vaporized and not burned — is a complicated process that requires many tools. Interested in seeing how the tools worked, Martin started using opium “under the guise of research.”

At the height of his drug addiction, Martin smoked 20-30 pipefuls a day. He broke the habit, thanks to the help of a Buddhist monastery in Thailand.

But he’ll never break his collecting addiction. Martin has begun his next collection: antique sheets of music for the song “A Pipe Dream,” which depict people smoking opium on the sheets.

This article was reported by the Murrow News Service, which distributes stories by journalism students at the Edward R. Murrow College of Communication at Washington State University.