With Frost/Nixon, the Civic tries to make humans out of icons. 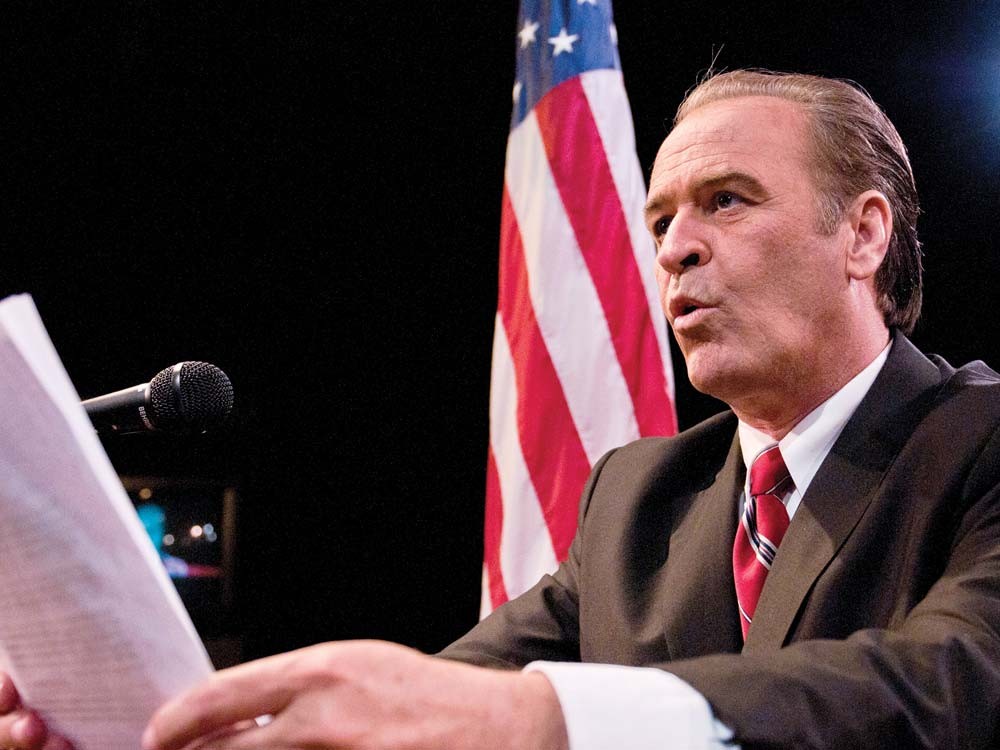 When David Frost approached former president Richard Nixon for a series of televised interviews in 1977, the British TV host’s intent was to reinvigorate his flagging career. He had no idea that it would mark a pivotal moment in American history.

The interviews are a record in themselves. Frost asks questions, Nixon answers in any way he sees fit. But they are famous for one defining moment when Nixon, in response to questions about Watergate, puts down his shield of obstinate denial and apologizes for his misdeeds. It’s not quite a confession, but it was the act of humility and repentance the public had craved since the scandal broke in 1972.

Playwright Peter Morgan sensed there was a larger story to all this, and his dramatic interpretation appeared on the stage in 2006 as Frost/Nixon.

It is a mix of fact and fiction that follows the two figures individually before culminating in the interview — which takes on the air of a showdown rather than a cozy fireside chat. The play quickly moved into London’s illustrious West End, then came overseas for a theatrical run, and was then filmed for the big screen. Uniquely, it retained its two principals — Michael Sheen as Frost, Frank Langella as Nixon — through each stage of its evolution.

“The play is about a lot of things,” says Susan Hardie, who is directing the local production of the play at Spokane Civic Theater, “but it’s largely about the role of the media. The play takes place at a moment in … our history where television was becoming a tremendously potent force in how people viewed their political leadership.

“What I want to do is underscore the power of television and what in the play they call ‘the reductive power of the close-up,’” she says. “We’re adding a technical element whereby we’ll have live video onstage and we’ll be videotaping the portions of the piece that are meant to be televised, so that the audience will have that sense of what it must have been like to watch the actual interviews on television. To watch the moment when Richard Nixon resigned office. To get a glimpse of what it must have been like when David Frost was doing his talk shows.”

That historical context is problematic on two counts: The audience has to have (or be given) some knowledge of the actual events to appreciate their significance, yet that same audience comes with certain preconceptions about the real-life participants in those events.

“You have to have a damn good actor to keep [Nixon] honest and believable and human and real while still bringing forth the essence of the character,” says Hardie, noting that Wes Deitrick will be playing the disgraced president.

“At some point you have to take your research and all those images that are in your head — as actors and director — and throw it out the window and do your role. That’s what we’re doing here.”

Because ultimately, she says, Frost/Nixon is less about icons and more about the everyman.

“There’s a very human thing going on. No matter how much we think our celebrities and politicians are gods, they really are only people.”

Event: Frost/Nixon At the Civic May 13-June 5