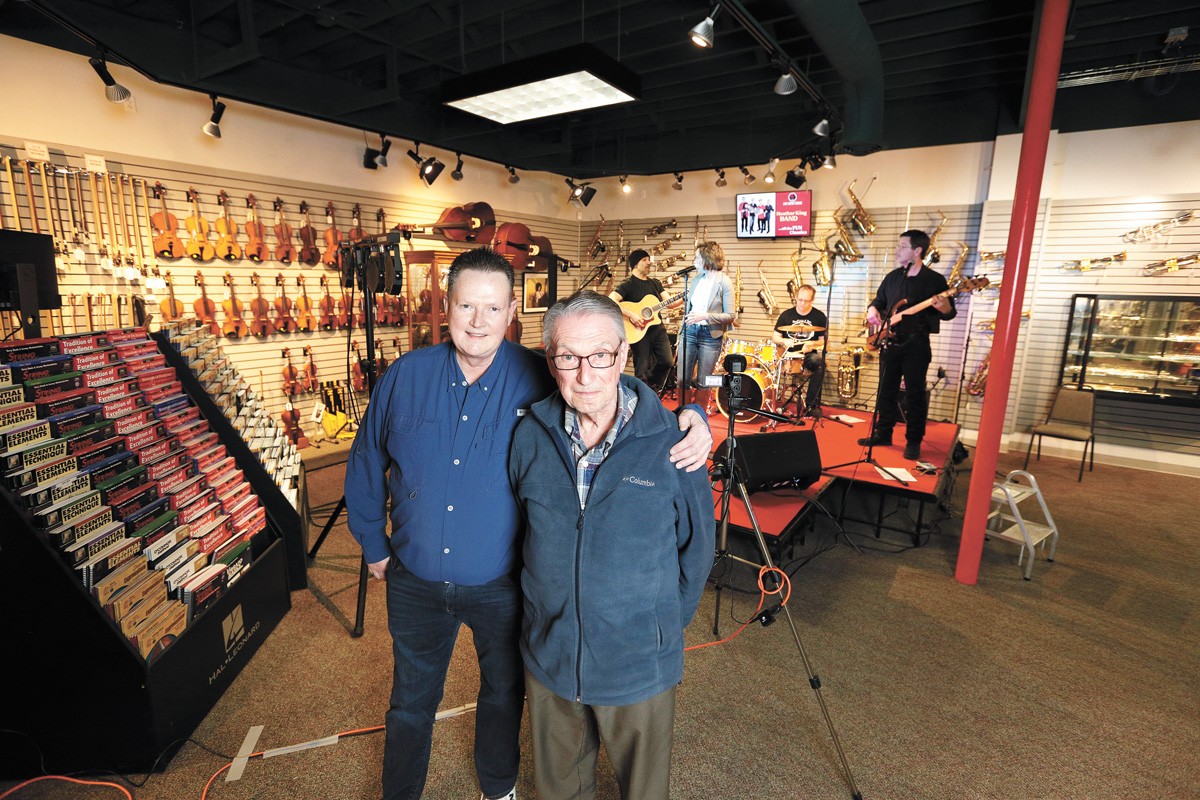 Last Thursday afternoon, the back corner of Hoffman Music transformed into a makeshift rock club for a few hours. The Heather King Band is on a small stage, a wall of brass horns and saxophones arranged artfully behind them, running through a sound check. They cover Alanis Morrisette and Bonnie Raitt and the Beatles, while Hoffman staff set the right audio levels and arrange a pair of cameras on tripods.

In a couple hours, the band's set will be streamed live through Hoffman's Facebook and Instagram profiles, the latest in a series of virtual concerts hosted by the venerable Spokane music store.

The store itself hasn't had this much noise in quite some time. Hoffman owner Allan Smith says he has long wanted to bring live music into the store, with a focus on local music teachers and their students. That desire only increased during the pandemic, especially during the months when live music was a rare commodity.

"I wanted to start bringing combos in from different schools and letting them perform, because right now, they can't really perform for anyone," Smith tells the Inlander. "It would give them something to really work for."

The first virtual Hoffman concert finally happened in December, when saxophonist and music professor David Larsen's quartet performed a selection of Christmas songs on Facebook Live. Since that performance, the store has hosted several more, ranging from singer-songwriter to acoustic rock to percussion-driven instrumentals. The concerts often occur during store hours, so customers can enjoy the music while they shop.

The response from the performers has been overwhelmingly positive, Smith says, adding that even some of the most seasoned performers have told him they've gotten pre-show jitters for the first time in years.

"They love it," Smith says. "Most of them come in here and tell me, 'I haven't been able to play in almost a year.'"

Larsen, who performed during that first Hoffman concert, has been a regular customer at Hoffman Music for years. As the director of instrumental studies at Spokane Falls Community College, he has seen countless musicians, amateur and professional, put away their instruments since the pandemic began.

"It was really hard on the students when it all first started," Larsen says. "The whole reason they got into music was being in a room with people, talking to people, playing with people. A lot of people shut down in the early part of COVID."

Following the December concert, Larsen returned to the Hoffman stage in March with a group of fellow professors and students for jazz standards. Larsen says he's back to in-person lessons and classes for now, which has rejuvenated a lot of his students.

"As a musician, it's just lonely doing all these Zoom things," he says. "You sit there thinking, 'I can play all these parts by myself, but I really wish I could be in a band.'"

During the pandemic, in-person lessons at Hoffman Music also came to a halt, with most of them transitioning to Zoom sessions. Smith says that sales and rentals of brass and woodwind instruments have gone down in the year since quarantine began (this is likely because school band programs, responsible for a majority of those rentals, were on hold), while sales for guitars and drum kits have gone up, as people decided to learn how to play during quarantine.

Smith says most teachers who host lessons through Hoffman are still going the virtual route, though some (particularly those specializing in string instruments) are back to doing in-person, distanced lessons. And now that the store has its virtual studio up and running, all kinds of local musicians are trying to perform there: Smith says their roster is booked up to July, and the organizers have even considered hosting outdoor concerts when the weather is warmer.

Upcoming performances include rock band Buffalo Jones on May 13 and the Celtic-leaning band Deep Roots on May 27.

Larsen says he empathizes with the need to get back to performing, but he has made the most of the COVID isolation: He's made countless YouTube videos and released an album called The Mulligan Chronicles, a tribute to late jazz luminary Gerry Mulligan, all while working on a Ph.D. dissertation (also about Mulligan).

Still, there's nothing quite like the electricity of an actual performance, and he's thankful to be involved in it again.

"It was not hard to convince people to come down and play at Hoffman's," Larsen says. "It's this exhilaration, and it's this connection. I equated it to the way athletes feel like: It's fun to sit around dribbling a basketball at home, but being in the arena with all the fans, it's a totally different experience." ♦

To get information on future livestreams, go to facebook.com/hoffmanmusicstore.

The original print version of this article was headlined "Riff Ready"