Do, re, mi, fa, so, la... ahem, just warming up for the Sound of Music sing-along. One can't prepare too much when you're about to — in public — combine your voice with Julie Andrews' mellifluousness. At least there will be subtitles in case you get stuck somewhere between whiskers on kittens, cream-colored ponies and schnitzel with noodles.

This showing of the classic musical not only includes the singing-along, but a costume contest. Come in one of those charming von Trapp children outfits, as a nun or as a crisp apple strudel. There will also be a prop bag full of items to use strategically throughout the film. It's sort of like the Rocky Horror Picture Show, but with less bare skin and more vibrato. The INB Performing Arts Center, $25, 5 pm. (JO MILLER) 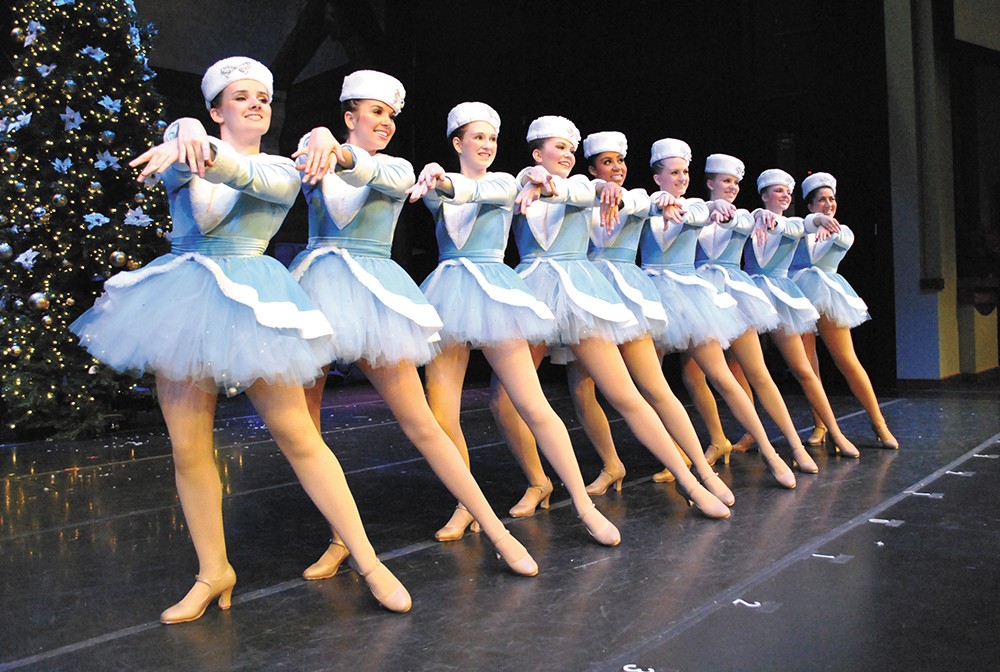 Traditions of Christmas runs Dec. 12-23 at the Kroc Center in Coeur d’Alene.

There should be at least one thing you do during the holiday season that's absolutely soaked in Christmas spirit. And the dancing elves, toy soldiers, Rockettes-style tap dancers, Christmas carols and live nativity at this performance of Christmas songs and traditions from around the world definitely fits that criteria. The Kroc Center in Coeur d'Alene, $20-$33, 1 pm. Runs from Dec. 12-23. (JM)

Why go to the overly crowded shopping malls to see Santa when you can see the jolly, red-clad man strapped to a pair of skis on a snow-covered mountain — presumably his natural habitat, right? Mr. and Mrs. Claus will be skiing and passing out treats at Schweitzer Mountain Resort from 11 am-1 pm. Then they'll lead a balloon parade down to the village at 2 pm, where everyone will snack on cookies and tell Santa their heart's desires until 4. (JM)

We all have our traditions that make the yuletide special, but being inconsiderate toward Mother Earth doesn't have to be one of them. For example, instead of buying wrapping paper, wrap gifts in a newspaper (but read it first!), old posters or scraps of cloth and secure them with ribbon you can reuse, instead of tape. Hand-make cards from recycled paper. Have a potted Christmas tree that you can use again next year. Cut down on the extravagant light display. Give someone something you own that's special to you instead of gifting only store-bought presents.

Sure, being environmentally conscious isn't exactly the focus of Christmas, but Christmas will still be Christmas without all the wastefulness. Promise. (JM)

You worked your tail off. You cleaned the house for company, decorated to a T, baked 12 batches of cookies, made a five-course dinner and got everyone the perfect gifts. Now take the day after Christmas and spend it acting like a child. Why? Because children don't have responsibilities. And besides, it seems like kids get to have the most fun on Christmas while the adults just do, you know, boring adult stuff.

So now that the pressure's off, take your turn. Go sledding, play mindless videogames, watch The NeverEnding Story, make snow angels in the front yard, get someone to read you a storybook, take a bath, and most important, completely ignore the mess created by the previous day's festivities. (JM)

This suggestion might seem weird at first. We are, after all, living in the 21st century, where getting to know someone means scrolling through his or her Facebook timeline, and charity can be a sympathetic "like" on a friend's post about struggling with his gaming addiction. But come on, we can do better. The holidays are about giving, being together, warm fuzzies... blah, blah, blah. But the reality is some people just don't have friends and family around.

Find someone new in town, or someone down and out, or just a quiet someone — maybe a co-worker, person in your neighborhood, fellow churchgoer, or your regular checkout person at the grocery store. Invite him or her over for pie, tea and crumpets, or a few beers, whatever your style. Who knows? Maybe that person will be your new favorite human. (JM)

By now, all of the holiday treats have probably been gobbled up and any left over are a bit stale. The new year fast approaches, and you know what that means. If you're like most Americans, you're about to obligate yourself to a year of healthy eating and exercise. However successful or fiasco-like that may turn out to be, take one more opportunity to savor the undeniable glory of melted brown sugar and butter-soaked bread.

Thaw out a loaf of frozen dough that you can get in the freezer section at the grocery store. Roll the dough out flat and slather it with butter. Spread a generous amount of brown sugar on top, add a hefty sprinkling of cinnamon. Roll up the dough into a cylinder shape and slice it up into individual rolls (slice big for thick cinnamon rolls). Grease a pan and place the rolls in it, so they're butted up against each other. Let the rolls rise for a while at room temperature, then bake for about 20 minutes at 350 degrees until golden brown.

For the cream cheese icing, mix together 8 ounces of cream cheese, one stick of butter, a box of powdered sugar and a teaspoon of vanilla. (JM)