Exploring the roots of our pumpkin-carving obsession 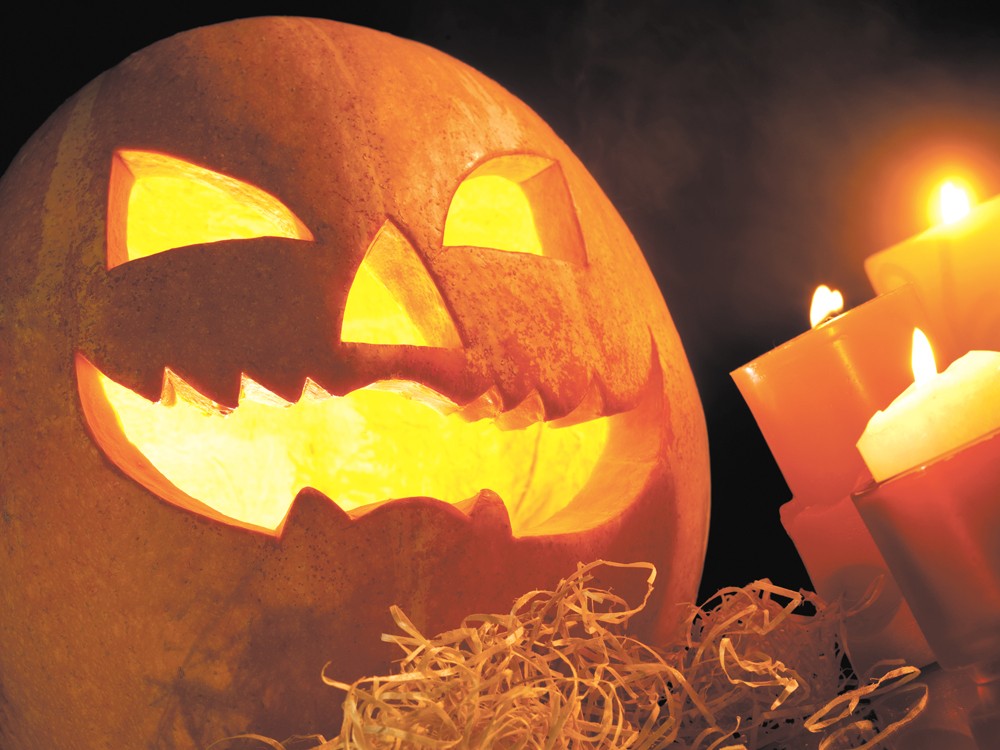 Carving pumpkins is sort of like eating pancakes: all exciting at first, and then you get sick of it halfway through.

Your hand starts to cramp up from gripping that little knife so hard. The cat silhouette you were attempting to carve looks more like an amoeba. Separating those delicious seeds from the slimy pumpkin pulp is a gross (but worthwhile) task. And your kitchen table ends up a sticky mess of stringy fruit entrails and damp newspapers.

Make no mistake — pumpkins are as essential to Halloween as candy corn and 24/7 reruns of It’s the Great Pumpkin, Charlie Brown.

But just what, exactly, are the origins of our pumpkin-centric fervor that make us so giddy to bundle up in scarves and frolic about Green Bluff with wheelbarrows and cameras? To whom do we owe the beloved custom of disemboweling a giant orange squash and putting fire inside of it?

A bunch of prankster kids, for starters.

In the beginning, “‘Jack-o’-lantern’ had absolutely nothing to do with a carved pumpkin,” chuckles Somerville, Mass., author Lesley Bannatyne, a leading Halloween historian and author of five books on the subject.

The phrase — also known as “ignis fatuus” or “will-o’-the-wisp” — originally referred to strange lights caused by combustible gas wafting over swamps, marshes, graveyards or other places ripe with decaying matter. These illusory lights receded as a person drew nearer, imparting the spectral impression of a wandering man, the dim light of his lantern glowing eerily in the mist as he attempted to find his way.

It’s a strange, scientific phenomenon that people have known about for a long time, says Bannatyne.

“If you go back into the 1700s, if somebody was referring to a Jack-o’-lantern, it’s something you almost see, but then it gets right out of your grasp — an illusion, a mirage, something tricky and mysterious,” she explains. “That’s the whole tradition of the words.”

The first carved pumpkins appeared in the early 19th century in New England, where hooligan children resolved to make ready use of harvest surplus by playing the “pumpkin trick” on unsuspecting villagers. The mischievous youngsters would carve several sinister faces in a single pumpkin, stick a candle stub inside, hang the ensemble in front of a window “and scare the bejesus out of people in their houses,” laughs Bannatyne.

But the pumpkin — which is not native to Europe — has no claim to fame as the original veggie lantern. The turnip, as it turns out, boasts a curious historical footnote (other than being a wannabe-potato that tastes like foot).

Folks in Great Britain and Ireland in the early 1800s would chisel creepy faces in turnips, mangel-wurzels (a type of beet) or the bulbous ends of kale stalks to ward off evil spirits on All Hallows’ Eve. The superstition eventually followed European immigrants to America, where the pumpkin replaced turnips.

The illuminated pumpkin gradually came to be associated with the “Jack-o’-lantern” expression, thanks to the flickering candle inside the pumpkin that gave the impression of a disappearing and reappearing light. The Jack-o’-lantern as we know it turned Martha Stewart-trendy around the 1890s, when Victorian hostesses started throwing themed Halloween parties.

A so-called “Stingy Jack,” however, cemented his place in folklore long before the first carved pumpkin made its maniacal debut. The “Jack-o’-lantern” idiom was first linked to a fable “as old as the hills,” according to Bannatyne. Fragments of the tale can be traced back to ancient Egypt, Arabia and Medieval Ireland.

Like most tall tales, the story appears in myriad documented forms (at least 800) all over the world. A common rendition boils down to a lazy but cunning Irish farmer with the moral fiber of Bernie Madoff.

“A real thug,” as Bannatyne puts it.

The gist involves the devil somehow getting tricked into promising he’ll never take Jack’s soul. It sounds like a sweet deal. But it backfires.

When Jack dies, he’s blacklisted from heaven for living a sin-ridden life. He’s also barred from the fiery gates of hell. Our antihero is now a dead hobo, doomed to wander the planes of purgatory for all of eternity.

“What goes around, comes around,” he titters, or something to that effect. Jack sticks the light inside a hollowed-out turnip.

Some versions identify the “light” as a lump of burning coal. In other variations, “the devil sticks the coal up his nose,” says Bannatyne. “Or the devil’s children beat him up. … There’s even a version with Elvis in it.”

So there you have it.

Thanks to the naughty shenanigans of Stingy Jack and a bunch of prankster children, their tricks evolved into a traditional Halloween treat we can all enjoy.