Home Is Where Your Health Is

Where you spend your time has an impact on your health. Choose wisely 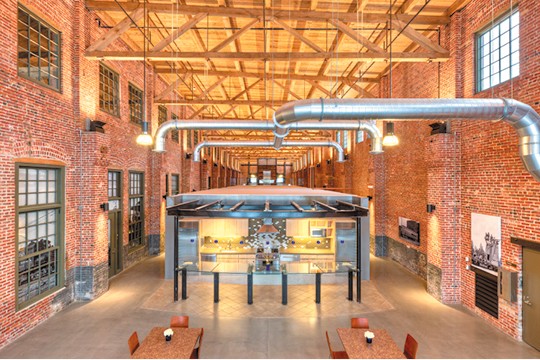 Dean Davis
The reclaimed interior of the SIEER Building at McKinstry Station.

The large brick building was dilapidated, almost condemned. Once a railroad hub, where streetcars and then freight cars were repaired and maintained, the tall windows had been sealed with cinderblocks years earlier. Mold had found a welcoming place to thrive, and mice had taken up residence. The building firm McKinstry decided to make it their new Inland Northwest headquarters.

Kim Pearman-Gillman, McKinstry's director of strategic market development, remembers how musty it was inside. They found lead paint and hydrocarbons from the engines and oil. And the company had to consider the whole site: The soil was contaminated with lead and arsenic, and BNSF arranged to have more than 3,000 tons of hazardous waste carefully removed from the site.

In just over a year, the structure was transformed into a light-filled, LEED-certified office space, both sustainably built and energy efficient.

"We wanted to take an older building and make it something very special," Pearman-Gillman says.

The building is now a handsome testament to the belief that Spokane's historic structures can be effectively salvaged, but it's also an example of how to think about building toward a healthier environment.

We tend to think of home improvement in terms of fresh paint, new light fixtures and remodeling dreams, while we think of healthy living as matter of eating well and getting to the gym. In fact, the places we live can affect our health in serious and long-term ways, and preventative care is required to check for health hazards that could be lurking in our homes and workplaces undetected.

Americans spend more than 90 percent of the time indoors, and the majority of that in their homes. Whether a charming old Craftsman, a renovated loft or brand new construction, all housing carries some possible risks that can be especially harmful for children. It's obvious to parents that children need to hold a hand to cross the street, Butterfield says, but environmental safety can be more troubling because it's not as straightforward.

"A lot of environmental health information is technical, and people need commonsense answers," she says. "They just need to know what to do."

Along with testing for radon, lead and carbon monoxide, the important thing is to stay vigilant for possible risks, Butterfield says. If you spray your lawn or garden for pests, for example, use the lowest dose that's effective and wash contaminated clothes separately.

"You're going to want to take your boots off at the door," she says.

Thousands of homes in Spokane have been assisted by a city program that offers testing for lead and other hazards. Shannon Meagher, program director of the Community Building Division at Kiemle & Hagood Company, which administers the program, says the main priority is to protect children. If tests detect hazards, a field agent works with the homeowners to come up with an action plan and arrange for improvements to be done affordably.

But they also tell families that one thorough check-up isn't enough to guarantee safety, because hazards can enter the home in many ways. Take the shiny plastic mardi gras beads that tend to show up everywhere — most may be fine, but some imported items have tested off the charts for lead and other metals like cadmium and arsenic.

"Unless you test it, you can't tell," Meagher says.

Get the Lead Out

Most parents of young children are familiar with the risks of lead paint, which was banned in 1978. But lead paint is found in virtually all homes built before 1940, and a federal survey in 2011 found lead-based paint hazards in more than 20 percent of all homes. The presence of lead paint isn't always a hazard — if it's not flaking off or gathering as dust, like on window sills, it's not an immediate health risk.

Home renovations can reintroduce the risk factor if precautions aren't taken to remove dust. The nonprofit National Center for Healthy Housing estimates that more than 1 million children are exposed to lead paint hazards each year during remodeling projects or renovations. Parents should be aware that young children can easily come into contact with lead, even if they're not chewing on window sills.

"They explore the world through touch and taste," Meagher says. "You can't stop that behavior."

Lead-based paint can be found on vintage furniture or heirloom toys, too, and in other non-paint sources: High levels of lead have been found in a range of imported goods like mini-blinds, dishes and even toys and jewelry meant for children.

Like lead, asbestos isn't harmful if it's contained and left alone. But the fibrous mineral can cause lung scarring and cancer over extended exposure. It was a popular building material through the 1970s and can be found in houses built into the '90s, often as insulation in attics or around pipes and boilers. It's important to identify asbestos before beginning any home renovations, and health agencies recommend hiring asbestos abatement professionals if asbestos must be disturbed.

The Inland Northwest is known for having high levels of radon, a naturally occurring radioactive gas that can seep into homes from the ground, and Meagher says they've seen that to be the case in homes they've tested.

"We are finding some pretty high numbers in this area," she says.

Radon is no small risk — behind smoking, the colorless and odorless gas is the leading cause of lung cancer in the U.S. Homes are tested in the basement or lowest floor, and a radon-mitigation system that vents the gas out of the house can be installed if levels are dangerously high. New homes in the area are required to have radon-resistant features, but it's still a good idea to test that the systems are working properly. ♦