Homeless and isolated, a North Idaho family tries to shield everything from a 1-year-old "bubble boy" 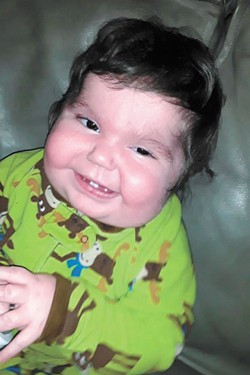 Heather and Frank Darby have grown accustomed to avoiding germs at all costs. With their three kids, they isolate themselves at home, only going out for essential needs like grocery shopping. If they must leave, they use hand sanitizer each time they touch a strange surface. When they come back, they strip their clothes for disinfecting.

They've been doing this for nearly two years. If they don't, the consequences could be lethal. Their 20-month-old son, Rayden, was born with complete DiGeorge syndrome, an extremely rare condition that effectively causes an immunodeficiency disorder, or what's commonly known as "bubble boy disease."

That means any germ — not just coronavirus — has the potential to kill their baby. If they do have to take him outside for an appointment, he's placed in a stroller with a clear fabric cover surrounding him like a bubble.

"Every person is pretty much looked at as a HAZMAT situation for us all the time," Heather Darby says.

And to make matters worse, as a new pandemic sweeps across the country, the Darbys have lost their home and are now living in a hotel in North Idaho. Plus, it's now harder to get things they need, like toilet paper and disinfectant wipes.

They're part of a small group of families across the country trying to keep their child alive as they wait for a procedure that can only be done in one place in the United States, at Duke University. They hope that now, at least, people will take their situation seriously.

"People are finally getting the slightest idea of what we go through every single day," Heather Darby says.

Their daily life previews what's to come for Americans due to coronavirus: A life in isolation, and constant anxiety that they'll infect a loved one.

Heather and Frank met in the eighth grade. They got together soon after and were married in Plummer, Idaho, in 2007, before either reached 17 years old. They had a daughter, who is now 13, and then another daughter eight years after that.

When Heather was pregnant with Rayden in 2018, they knew early on there could be complications. Days after he was born in Spokane, the results of the newborn screening came back.

"The doctor didn't even know what to do with it," Frank says.

As it would turn out, he had DiGeorge syndrome. It is a defect in chromosome 22 that can cause a wide range of disorders including heart defects, cleft palate and immune deficiencies. Those with an immune deficiency have an underdevelopment of the thymus, an organ of the immune system that develops T cells.

There are fewer than 200,000 cases a year of DiGeorge syndrome in the United States. And of those cases, about 1 percent have complete DiGeorge syndrome, in which they have no thymus. What's known as bubble boy disease is a lack of T cells in the thymus. But for children like Rayden, the thymus isn't there at all.

"Most of these children never make it to 1 year of age," says Maria Teresa de la Morena, an allergy and immunology doctor at Seattle Children's Hospital.

The Darbys knew everything had to change when Rayden was born. They stayed in Seattle, where they had easy access to Seattle Children's. They're unable to work by doctors' orders, but they only get roughly $700 a month through Social Security. Their top priority was to keep the family together and their baby safe, and when he first got out of the hospital, they had to take him back to a tiny one-bedroom apartment.

When they did, Heather came down with a cold. She was terrified. Frank kept Rayden in the other room, but Heather thought for sure she was going to kill her baby. She remembers wearing two masks at a time, looking at her son from the other room and crying because she couldn't even hold him.

Rayden later did get a common cold, and he's had it for nearly his entire life now. From day one, he's had problems with his skin — "it's fighting itself," says Frank. And he has an infection from an ingrown toenail that's been there for six months.

But he's like any other baby. He's starting to crawl, and could maybe walk soon if not for his clubfoot. He climbs, throws things and grabs. He loves hot dogs and chicken nuggets.

The one thing that could save Rayden's life in the long term is a thymus transplant. But it's not yet FDA approved, and only Duke does it in the U.S., so the waitlist is long. Dr. Louise Markert, who investigates thymus transplantation at Duke, says the thymus is like a schoolhouse and the T cells are like students. In patients with complete DiGeorge syndrome, the prospective students, or T cells, are out looking for a school but can't find one. Once a thymus transplant is done, then the T cells can find the thymus, and in six to nine months they "graduate," meaning antibodies are being produced.

The first transplant was done in 1993 and over 100 have been done since then. But Markert is hopeful that by joining with the bone marrow transplant folks at Duke, those numbers will soon rise.

It's no guarantee: The survival rate for those transplant patients is about 72 percent. But it's better than the alternative of trying to prevent any virus from sneaking in.

"You can live beyond two years, but this is not what you would call a life," Markert says. "Your family's in isolation. It's really challenging, and it's challenging to keep infections away."

It's even harder without a home of your own. A month ago, the Darbys were evicted from their Seattle apartment right after the house manager tried to take away their handicap parking spot. Heather says she called the manager a "bitch," and shortly after they were served an eviction notice — that the Darbys provided to the Inlander — citing "verbal abuse."

They took their family back to North Idaho.

I met with Heather and Frank Darby where they're now staying, at the Coeur d'Alene Casino Hotel. They drink coffee out of plastic cups, and Heather sanitizes after each time she touches hers. At a large round table above the hotel lobby — away from people — they make sure to stay 10 feet away.

They have no tolerance for anyone being reckless with spreading germs. If someone coughs towards them, Heather will give a death glare.

"It's like somebody fired a gun towards me," Heather says.

The last two years have changed their outlook toward those who are medically vulnerable. They used to not get flu shots, because they figured if they got sick, they'd be OK. Now, they're thinking of other people who may get sick, and of course they'll get flu shots. They wish people were as careful about not going out during any flu season as they are now.

"It's hard to tell people to not go out when you're sick," Frank says. "But, I mean, you're saving somebody."

The practicalities of living like this — cleaning the room twice a day, sanitizing all the groceries — are difficult. And they can't cook in a hotel room, so they have to leave more often, putting their son in more danger. So far, they've been able to pay for the room with help from family and donations. Anyone who wants to help the Darbys can donate at gofundme.com/f/help-terminally-ill-rayden-overcome-homelessness.

But just as hard, or harder, is the mental part of it. They miss their friends and family. They run out of things to do. And their teenage daughter can only see her friends virtually — she goes to school online, and her friends aren't always willing to quarantine for days each time they want to see her.

"It's hard, and it does mess with your head," Heather says. "You're literally locked in a very small box."

But it can be done, she says. The Darbys have done it for almost two years.

"The only reason we've been able to keep Rayden alive," Heather says, "is because we've given up everything." ♦