Even with ALS, Steve Gleason has always been in the right place at the right time. 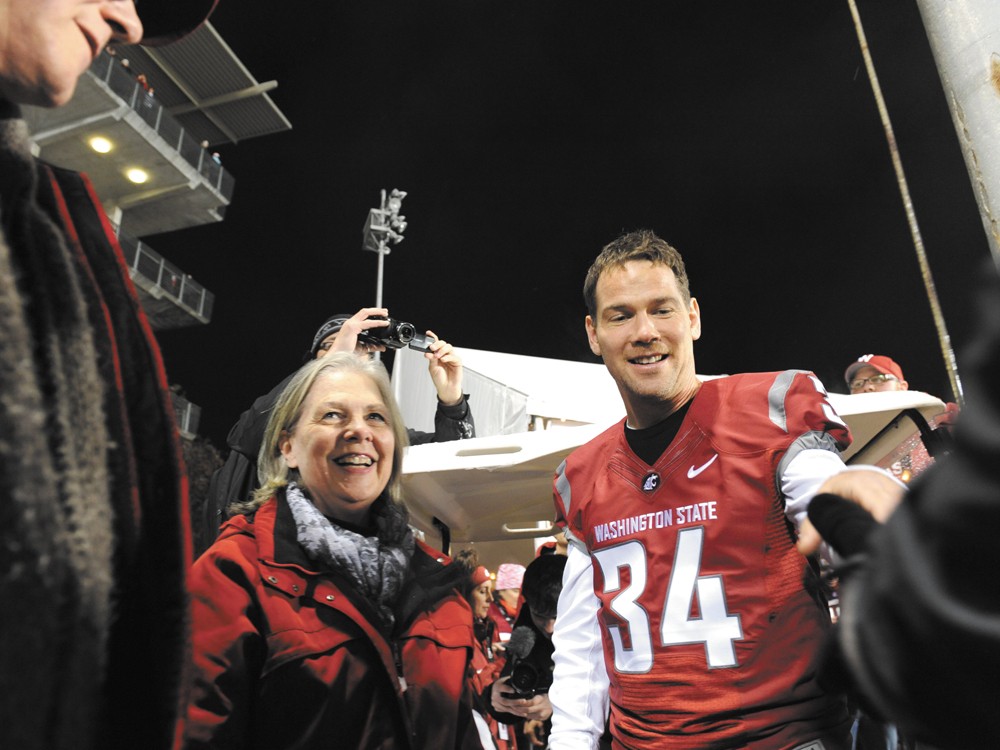 Native Spokanite and former WSU and NFL star Steve Gleason returns to town for an ALS benefit this weekend.

Steve Gleason made a career out of being in the right place at the right time.

In 2006, as a member of the New Orleans Saints special teams unit, Gleason blocked a punt against the Atlanta Falcons that was jumped on in the endzone for a touchdown.

It was the first touchdown for the Saints at their home stadium, the Superdome, in almost two years. Hurricane Katrina had devastated the region so badly they’d spent the last 21 months splitting home games between Baton Rouge and San Antonio. The New York Times has since called Gleason’s block the “most important play in Saints history.”

Last month, a statue commemorating that play, showing Gleason in mid-dive, was erected outside the Superdome.

Gleason said he didn’t want the statue to be about him. “I want it to be about what that play symbolized, which was a commitment by this community to rebuild,” he told the Times-Picayune. “This statue is about coming through adversity. It’s about finding your heroes.”

Now, though it’s probably never a position he intended to be in, Gleason — who was a two-time GSL Defensive MVP at Gonzaga Prep and an All PAC-10 honorable mention at Washington State — once again finds himself in the right place at the right time.

In August of 2010, the New York Times reported on research that showed NFL players and other people who experience traumatic brain injuries are at an increased risk to get ALS, commonly known as Lou Gehrig’s disease. The study also found that players get ALS younger than most.

Five months later, on January 5, 2011, Gleason was diagnosed with ALS.

When Gleason got his diagnosis, he says, via email, that he felt, “[A] mixture of disbelief, frustration and desperation.” ALS is a terminal condition and often progresses rapidly. The disease would take his motor coordination and his ability to speak. It would eventually take his life.

But he also saw an opportunity.

“I felt that I had a platform that could help change the trajectory of the disease on a global scale,” he says.

Gleason has since dedicated his time growing Team Gleason, a nonprofit he launched the summer after his diagnosis to empower those living with ALS and to aid the search for what the foundation calls “a solution to heal.”

In that year, his motor coordination has deteriorated to the point where he has become wheelchair-bound and the muscles around his soft palate have weakened, making it hard for Gleason to speak. But Team Gleason has gotten stronger as Steve Gleason’s body has weakened. In June, at Black Rock, a golf tournament in support of Gleason raised more than $300,000. In New Orleans, the foundation helped build only the second ALS house in the nation.

“The support and recognition that we have received has been overwhelming,” Gleason says. “Obviously we have a long way to go. But I feel that, in some way, we are making a positive impact.”

The foundation is headquartered in Gleason’s adopted home of New Orleans, but Spokane has become a kind of unofficial Western outpost. Team Gleason holds its first Gleason Gras! West at Saranac Public House and the Red Lion on Friday and the Bing on Saturday. It’s modeled after an event held in New Orleans last year. Organizers want it to become an annual thing.

Steve Gleason says ALS has forced him to appreciate the simple things in life.

“In life it’s easy to get overwhelmed by distractions and problems. Oftentimes, we get caught in our past or future rather than experiencing the beauty of the present moment,” he says. “None of us know when we may die so I think it’s important to pursue the activities you love and spend time with people that you love.”

Like, perhaps, catching a show this Friday or Saturday.