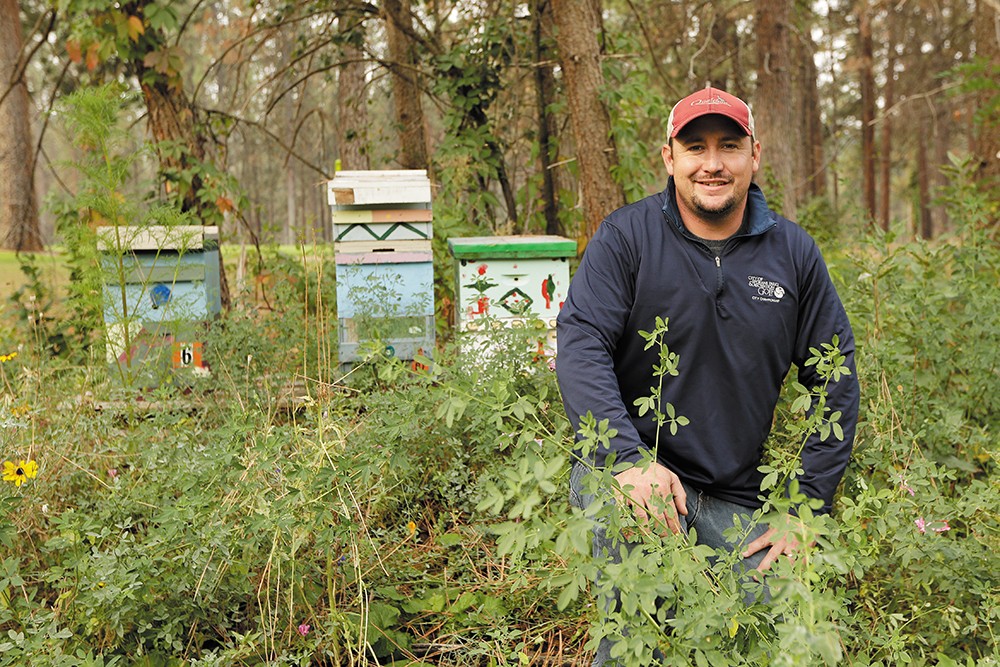 Young Kwak
Mike Greene's beehives are only one part of his plans to green up the golf course.

this past summer as pumpkins and tomatoes thrived in a nearby organic garden and new wildflowers fed three hives of healthy honeybees.

It's all part of head superintendent Mike Greene's plan to make the city-operated golf course a little friendlier for the environment.

"I don't know anybody that really wants to use chemicals in our industry," Greene says. "Sometimes you have to, but we're really trying to do all the things that we can control."

Greene, who started with the course in February 2016, got to work planning for the 2017 season last winter, when he applied for and won a $2,500 grant from Bayer Crop Science to create a pollinator habitat. That went toward about an acre of 25 varieties of wildflowers planted in different places on the course. And living among those wildflowers are honeybees. 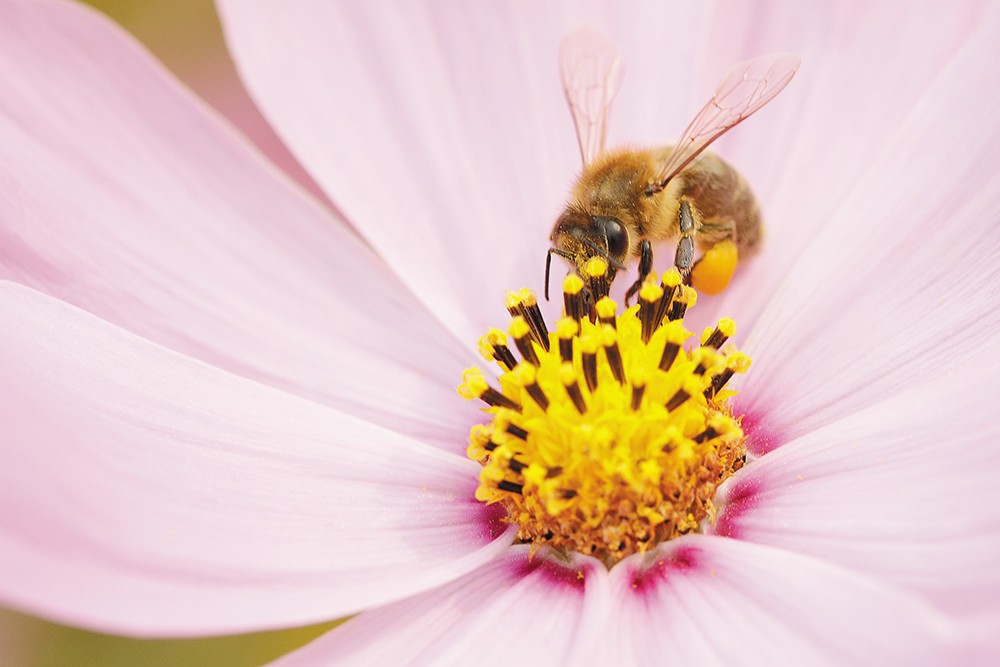 for help getting three hives, one of which was a wild hive that naturally split off into a new swarm and went looking for a home. Olson, who rescued the swarm on the South Hill, says he knows they're hearty bees because they survived the winter on their own. The other two hives are German and Italian varieties of honeybees.

"There's getting to be more awareness the honeybee is more endangered now. There's all kinds of viruses and mites that get in the hives," Greene says. "And obviously some chemicals, especially when they're applied incorrectly, can be damaging to colonies of bees. We're trying to show that we're trying to be smart about it, cautious about it, and not only minimize our use but encourage some other wildlife."

Part of what got Greene started on the changes was looking at how many pesticide applications the course needed the previous year and wanting to do better. One of the ways to minimize use of chemicals has been to spray the greens with compost tea, which is, well, just what it sounds like.

"It's basically just a big tea bag with about 5 to 10 pounds of compost in a 55-gallon barrel," Greene says.

They keep the temperature between about 55 degrees and 90 degrees, and brew the compost with a food source, usually sugar, for beneficial bacteria to feed on. For around 24 to 36 hours, they let the "tea" steep, and throughout that time add a "whole bunch of dissolved oxygen through an air pump," Greene says.

"It kind of looks like a boiling pot of water, even though it's room temperature in there," he says.

Downriver has about 120 acres of maintained grass, and this past summer the course really only had to use fungicides on about three acres, where the greens are located, he says.

"So far this year we've reduced about 50 percent of our inputs, chemical-wise, on those three acres as well, using some compost tea and some different natural approaches," says Greene. "Every time we use a fungicide, it tends to knock out some beneficial fungi and bacteria, so we're brewing compost tea and adding additional bacteria and beneficial fungi to compete against the pathogens."

The tea helps make the grass hardier, which helps it handle drought better and saves on fertilizer costs, he says.

Through the early part of the summer, the course had already saved $5,000 on chemicals, which allowed it to buy more fertilizer for the fairways, which made that grass more drought-tolerant, which in turn, saved on the amount of water needed, Greene says. 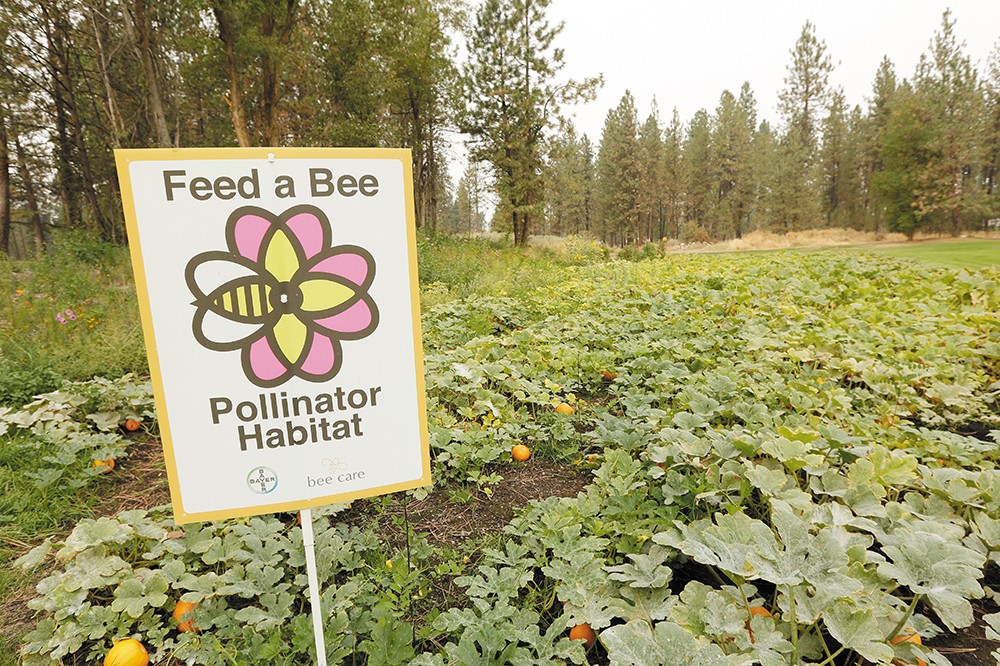 Young Kwak
The Down River golf course has become home to bees looking for a good meal.

who presented Greene with a mayor's coin at the end of June, honoring his work to reduce the city's impacts on the environment.

"It was cool. It's all good, but I was really more surprised by just the amount of attention that it got for the pollinator project," Greene says. "I wasn't expecting really any recognition from anybody. It was more about creating habitat for the bees."

Greene says he's also been nominated for an environmental stewardship award given out each year by the Golf Course Superintendents Association of America.

The work on the course will also serve as a teaching ground this fall, with at least one field trip on the books already for a local third-grade class.

They'll get to pick some pumpkins from the hundreds growing on the course, and learn about insect life cycles, Greene says.

"[Will Olson is] going to help explain the life of the honeybee," Greene says. "I'll be explaining the natural approach we're taking, and the efforts we're doing to reduce pesticide use and protect the natural insects we've got on the course."

And if they're lucky, the kids might even get to taste the fruits of the hard working bees' labor, with a little sample of the first honey harvested. ♦