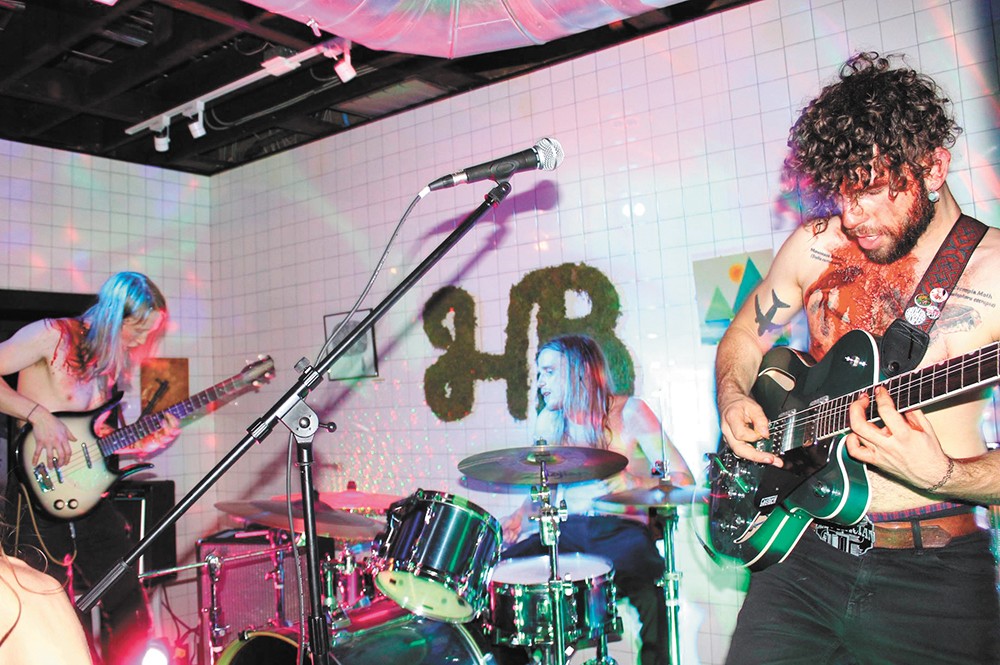 Joshua Bacha was never a slouch on guitar,

but he didn't truly devote himself to the instrument — or music in general — until about three years ago. He's since made up for lost time by completely absorbing himself in practicing and performing; by no coincidence, his skills have improved by leaps and bounds.

Bacha is the frontman of Charcoal Squids, a bluesy, psychedelic rock trio out of Missoula, Montana. By his own assessment, he's progressed, especially when it comes to improvising guitar solos.

"There have definitely been times where I've biffed it," he admits, "but sometimes you just pull this solo out of nowhere, and when it goes really well it feels super awesome. I'm finally getting to the point where there's less biffing and more, 'Aww, sick.' It's like throwing a dart at the wall, but now I'm like, 10 feet closer to the board."

Honing his chops is essential, he says, because improvisation plays a large role in the band's live sound.

"I like the idea of improvising some parts, because it means nobody is going to see the same show twice," he says. "There are structured sections of each song we all mutually agree upon, but we purposefully leave these holes so we can give people different experiences."

Bacha explains that before he found his musical path, he was attending the University of Idaho "but didn't really know what I wanted to do." He dropped out of college, moved to Missoula and founded his own label, Ghost Carrot Records, which subsequently signed fellow psych-rock outfit Tiny Plastic Stars and the fuzzy, folky Tomb Toad. It's all part of his scheme to pursue music and visual art full-time, and for the last couple of months he's managed to pay rent through various creative gigs.

"It's about making more connections, getting out of my comfort zone and meeting new people," he says. "The more connections we make, that's going to open doors. Eventually, I'd like to play some of the bigger festivals."

The band has gone through several different lineups, but Bacha says the current trio has found a creative sweet spot. In fact, part of his motivation for moving to Missoula was to work with bassist Riley Roberts and drummer Dan Miller.

"We're all people who care about our art and spent a lot of our lives practicing our instruments," he says. "I find of sense of happiness from music; it fulfills me, and I think it fulfills them, too."

"I mixed and recorded the whole thing and put a lot of time into it," Bacha says. "It turned out really awesome for the little amount of knowledge I had going in, and I learned a lot from recording that album. I learned how much I still don't know."

Looking ahead, Bacha is working on writing Charcoal Squids' as-yet-untitled second album, which he says is shaping up to be far more polished and mature. He's steering the band toward synthesizer-based arrangements on top of the usual guitar freak-outs. Of course, that means he's teaching himself how to play keyboard as Charcoal Squids prepares to enter the studio.

After all, he only got serious about music a few years ago.

"Everything is a learning process for me," he says, "but it's a journey, not a destination." ♦