Yes, we're awesome, but we're not really a great match for Amazon 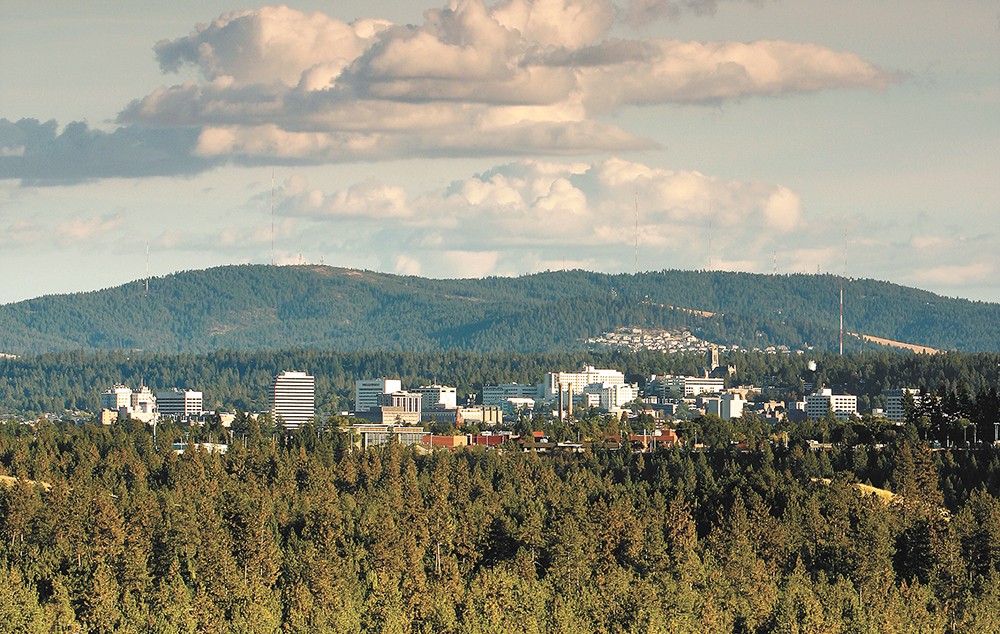 Young Kwak
Sure, we have enough land to accommodate 50,000 Amazon workers, but that alone isn't enough to draw the retail giant here.

The Spokesman-Review posed the question in huge, bold type on its front page last week.

We can answer that.

The Spokesman's story — about Spokane joining the crowd of cities begging Amazon to locate its second headquarters in their city — discusses some of the reasons that Spokane would be a "long shot" pick for the tech behemoth.

But it also dedicates a big chunk of its front page to bragging about five reasons Spokane could be a great choice, including the World's Fair we held 43 years ago. True, there are plenty of reasons why Spokane can be attractive to certain types of big companies, especially in the aerospace industry. We have a direct rail line to Seattle. We have a low cost of living. Until recently, we were both near nature and near perfect. We have heart, hustle, spunk, gumption, and not one but three Red Robin dining establishments.

But Amazon isn't just looking for a place with gorgeous views and a garbage-eating goat sculpture that actually eats garbage. It has some specific requirements. And unless it's willing to overlook those requirements, Spokane doesn't have a chance.

Amazon wants a region with more than a million people. This one is explicit. Even if you include Coeur d'Alene, the Combined Metropolitan Statistical Area of our region, at just over 710,000 people, doesn't even crack three-quarters of what Amazon is asking for.

Amazon wants a diverse population. According to the census, Spokane and Spokane Valley are very white — 85 percent white, to be exact. By contrast, the United States is only 61 percent white.

Amazon wants room for 50,000 employees. Technically, the Spokane region has more than enough land for 50,000 new employees. But as we just reported in August, Spokane is suffering from a rental crunch — we aren't building enough new apartments fast enough to be able to meet our current demand. Rents and housing prices are still a whole lot cheaper in Spokane than they are in Seattle, but we certainly aren't poised to accommodate sudden, rapid growth. Furthermore, Washington state, because of the Growth Management Act, has a lot more legal constraints on sprawl than a city in, say, Texas would have.

Amazon wants an educated workforce. Our population isn't particularly educated, relative to many other cities. About 31 percent of people in Spokane County have a bachelor's degree or higher — about on par with the national average, and less than the state average. Idaho's Ada County, home to Boise, by contrast? Thirty-eight percent of its workforce has a bachelor's degree or higher.

Amazon is looking at crime data. Spokane isn't a violent city. But it continues to have one of the higher property crime rates in the nation.

Amazon wants massive incentives from the city and state. Washington state has been more than willing to shovel billions of dollars of tax breaks to companies like Boeing. But the state also has limitations. In Washington, it's illegal to give public money directly to public businesses. And while cities like Spokane have occasionally found ways to get around that, most observers predict that Amazon is going to want a truly major bag of goodies from whatever city in which they relocate. In most other communities throughout the state, port districts with special taxing authorities have been used to build specific infrastructure in order to attract major business. But tax-averse Spokane has repeatedly rejected attempts to create a port district. It's one reason, along with cheap power, why Spokane has found itself losing out to Moses Lake, of all places, for manufacturing jobs.

None of these weaknesses, of course, have stopped Spokane from attracting some major manufacturers like Caterpillar and Katerra. But lately, one study shows, the Spokane-Coeur d'Alene area has lost more company headquarters than any other similarly sized region.

Denver, by the way, was the city that the New York Times thought made the most logical sense as a site for Amazon's second headquarters. Spokane didn't even merit consideration. ♦