Call it dark, call it controversial or just call Stage Left's production of Equus what it is: great theater 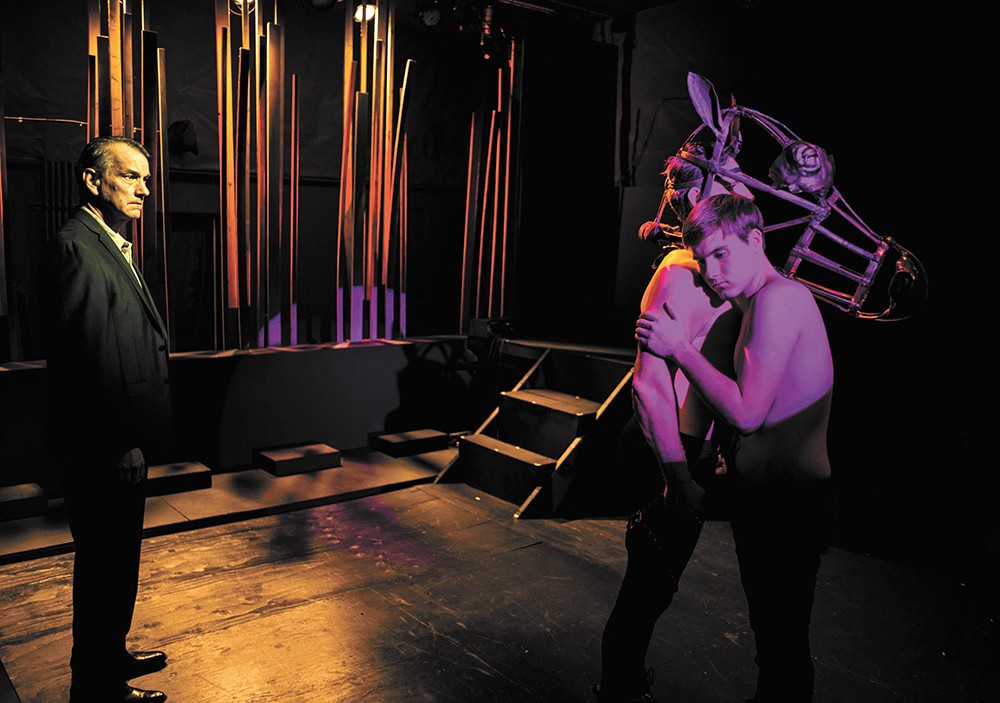 It's tempting to fixate

on the "edginess" or "controversy" of Equus, Peter Shaffer's 1973 psychosexual exploration of a boy who deifies horses and yet willfully blinds a half-dozen of them, as if it has to be excused or justified to a public too sheltered to cope with abstract portrayals of animal cruelty or a few fleeting glimpses of nudity.

For local perspective, recall that this play was staged in 1989 in the basement of the Civic — the same studio theater where Clue: The Musical is currently enjoying a sold-out run. Mark Pleasant — now a frequent star of light comedies and musicals — played the role of the troubled youth, Alan Strang. Have audiences truly become more averse to the play's content in those 26 years, opting instead for a diet of blithe entertainment, or is it vanity that leads one to presume they do?

Acceptability, normalcy, sin: these are notions that Equus, now in a terrific production at Stage Left directed by Troy Nickerson, broaches and challenges. When Hesther Salomon (Jone Campbell Bryan) first approaches Martin Dysart (Thomas Heppler), a jaded child psychiatrist who has dealt with disturbing cases for years, she warns him about the particular heinousness of this one. The boy, seemingly unprovoked, plunged a hoof pick into the animals' eyes, for heaven's sake.

By act two, however, Dysart is flailing through an existential crisis, wondering aloud if reticent, 17-year-old Strang (Nathan Patrick Nelson) isn't somehow a figure worthy of envy. Even a warped passion such as his might be preferable to the psychiatrist's own resigned nihilism. And besides, is Strang's unfettered, sexualized equestrian fetish any stranger than a major religion that takes a masochistic delight in the suffering of its savior? Or the worship of gods, now quaintly entombed in antiquity, who demanded ritual sacrifice?

Under Nickerson's inspired direction (he has the characters remain onstage after their initial appearance to become silent participant-observers), this production of Equus unites all the elements of quality theater: intelligent material, solid acting and beautifully functional sets and costuming. Lei Broadstone's shirtless "horses" (Nick Bailey, Craig Hudkins, Scott Mackay, Jerrod Galles) also sit alongside as mute witnesses; they wear black leather, silver studs and buckles, evocative not only of riding gear but the kinky fantasies that, say, Strang's father (played by Chris Jensen) might indulge were it not for self-repression. Among a strong cast, Tami Rotchford, an alumna of the 1989 Equus, delivers a particularly affecting performance as Dora, Strang's prim, fretting mother. ♦