Why Stewart Fry's lettuce is different from any other kind you can find locally. 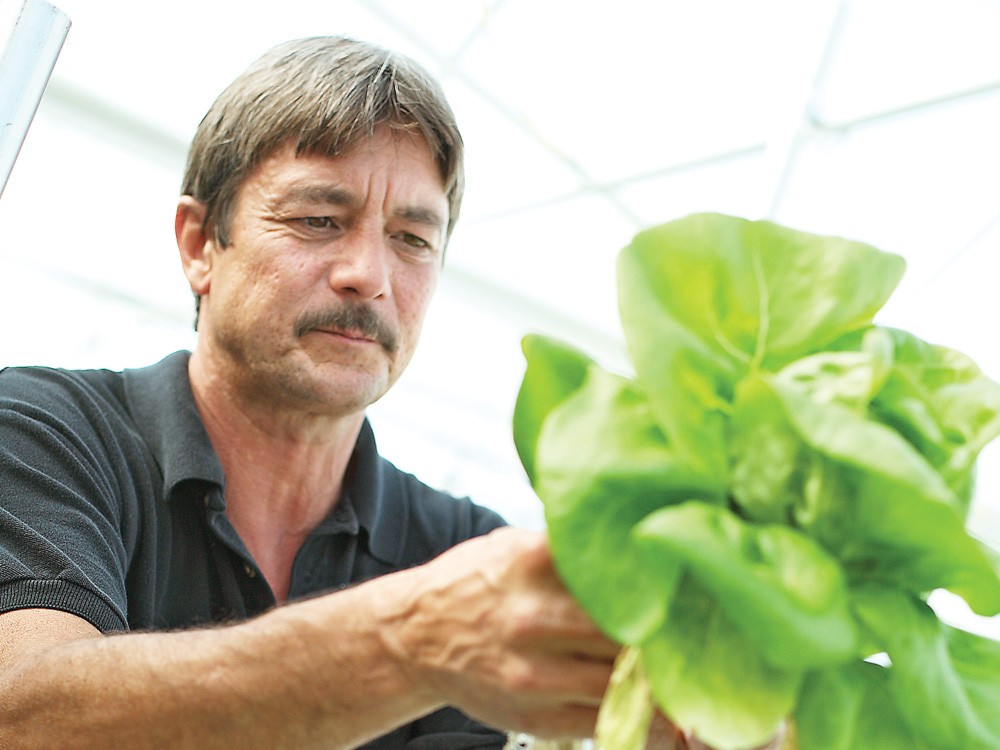 Clutching my copy of Maximum Yield magazine, I hastily follow Stewart Fry of C & S Hydrohuts as he maneuvers through a verdant sea in his Otis Orchards greenhouse. As we go, he introduces me to each of his crops, as well as the large barrels of plant nutrients they are fed from. He’s growing vegetables here hydroponically — meaning they aren’t grown in soil, but in mineral-infused water.

In 2000, Fry and his wife, Cheryl, were running a storage facility, and had plans for expansion into the surrounding property. But they discovered that their land was zoned exclusively for agriculture. And neither of them had any experience in commercial plant cultivation.

But the Frys wanted to keep working on their own terms, and so they considered farming. They analyzed different techniques, discussing what was feasible. There was no steady demand for flowers. Traditional greenhouses didn’t yield enough. Organic gardening was expensive.

What about hydroponics? Considering that hydroponics is best known for its popularity among marijuana growers, the idea seemed crazy, at first.

But when the Frys thought about it, it made perfect sense. Hydroponic farming is sustainable, requires little manpower and has a minimal (if any) effect on the soil. The method had gained a growing following in more progressive culinary cities, and besides, acquiring a hydroponic greenhouse is like purchasing a new living room furniture set from IKEA: It comes delivered in a box, disassembled, with an instructional pamphlet.

Suddenly hydroponics seemed to be the ideal option — plus, it’s a farming practice with no local competition.

Their cash crop is Bibb lettuce — delicate, flavorful greens that they sell in plastic clamshell containers. The building was actually designed to grow that specific variety of lettuce, and when Fry decides he wants to expand the company, he says he’ll get another type of hut.

“There are huts that are specifically designed to grow cucumbers and peppers and tomatoes,” he says. “I’ve been experimenting with those, so when we add on, we’ll probably go that route.”

The technology of hydroponics has come a long way from foil-lined closets with a single high-powered light bulb. Today, growers use plasma lamps and computer-controlled nutrient-dispensing systems.

In addition to producing vegetables 365 days a year, Stewart’s huts boast a water recycling system, thus eliminating runoff (a major polluter in traditional farming), and they use 25 percent less space than other farms.

Also, gourmands will be pleased to know that the Stewarts’ produce is often picked only hours before reaching its destination and will continue to thrive in the weeks following.

The controlled environment of a greenhouse not only protects from outside elements but also outside predators and disease, making it easier than ever to go organic. Pest control is achieved by simply introducing parasitic wasps, lacewings or ladybugs.

In addition to its technological advances, the hydroponic method has become increasingly accessible for those who are interested in gardening but who lack land, or even those who simply wish to supplement their diets with fresh produce in the winter months.

John Waters of 509 Grow, a shop on Spokane’s North Division Street that caters to hydroponic growers (regardless of their crop), is barely able to contain his excitement over the phone as he lists every component of a startup kit.

There’s a reason why High Times boasts hydroponic techniques amongst its ganja centerfolds and ads for the latest Lebowski Fests. Anyone can maintain an organic hydroponic garden on a budget. And Stewart says kids love to be involved.

“I love having the elementary kids out at the greenhouse for field trips” laughs Stewart, “They always ask the best questions.”

One upside of the pandemic? Home gardening is booming. In the Inland Northwest, now's the time to plan your planting.