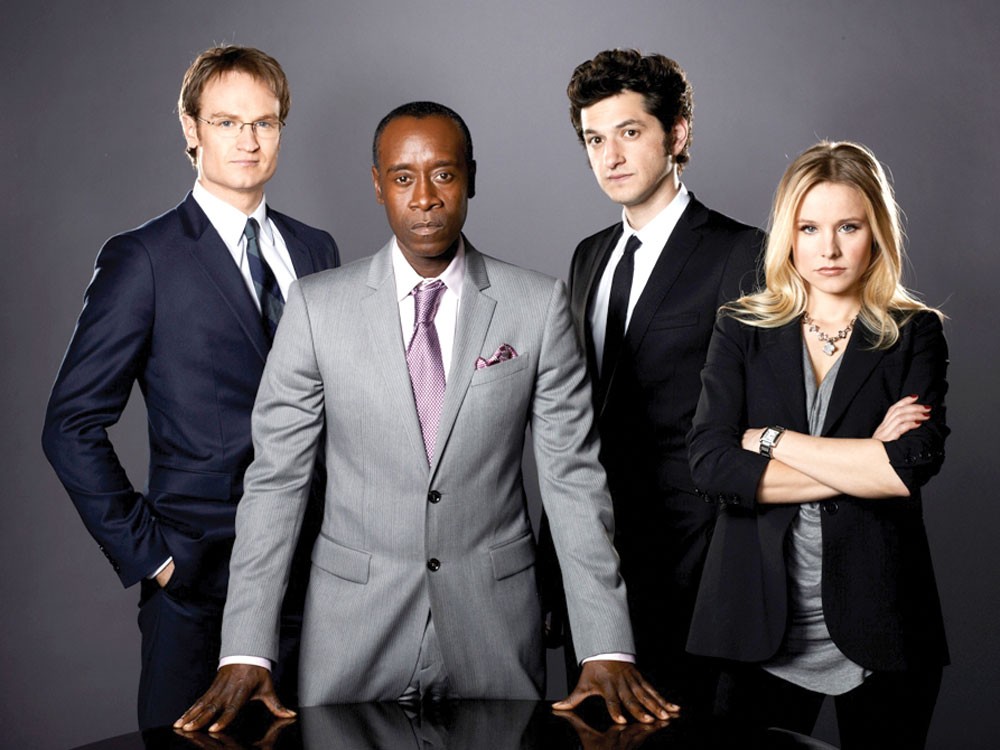 Is that Veronica Mars?

So the corporate power elite is screwing us, right? Occupiers think so. Tea Partiers think so. Warren Buffet admits, Yeah, we more or less are. It’s about the least-controversial position to hold right now.

Showtime’s new half-hour comedy, House of Lies, is about the firms who screw the screwers.

Marty Kaan (Don Cheadle) is a top-flight management consultant. A nerdy white guy, a suave-ish Jewish guy and the woman formerly known as Veronica Mars (Kristen Bell) are his team. It is their sole job to convince companies that they need the services of the consulting firm. Consulting, to be clear, is not fixing. Fixing would lead to the firm no longer getting paid. Consulting allows for a neverending stream of cash from the corporate teat.

Kaan and his team sell snake oil, basically, and Kaan will do anything to get a competitive advantage, including lying to people and sleeping with their wives.

It doesn’t really matter if this is the way consulting firms actually behave. House of Lies’ candy coating is schadenfreude. Showtime has given us a team of likable degenerates who screw big companies the way big companies screw us.

It paints a worst-case picture of corporate predation that is funny and smart and ties into that oddly American obsession with graft. Marty and company are con men, after all. Their incredible innovation is that their con is between businesses and is therefore legal. That part of the show is too cartoonish to be offensive. It’s corporate Entourage. Californication without the sentimentality.

Though cracks in their confidence show when they’re strategizing how to bilk these companies, the team — and especially their leader — is unflappable in the boardroom.

The show is mostly unflappable, too, though the cracks in temperament it allows are small, deliberate and powerful.

Kaan’s son is into cross-dressing, something that creates worry at home and tension at school. One evening, the kid asks, “Dad, what’s a fudge packer?” Marty asks, “Did somebody call you that?” The son laughs and says he’s just screwing with him. There’s a moment of relief, but only a moment. Marty asks again, “Are you sure nobody called you that?” The episode ends without knowing.

It’s taking things really slow, but House of Lies has a conscience underneath its amorality. I’m enjoying watching it develop.

The Super Bowl
It is going to be a scorcher in the regally named Lucas Oil Arena in beautiful, flat, hickish Indianapolis! It’s Patriots/Giants in a classic-ish Northeastern U.S. rivalry that will finally settle that age-old question: Who is the better quarterback, a two-time Super Bowl MVP or Peyton Manning’s little brother? That’s drama! (NBC, Sunday, Feb. 5, 3 pm)

Smash
NBC has been “and introducing” Katharine McPhee just about since the show was announced last May. Which, to be clear, was roughly five years after she was introduced as a contestant on American Idol. We’re excited for Smash to start just so we can get a different commercial choking up 40 percent of NBC’s airtime. McPhee stars as a Broadway hopeful who gets her big shot. (NBC, Premieres Mon. Feb 6, 10 pm)

Doomsday Preppers
Finally, a show about people who are preparing for the end of the world. Featuring bomb-shelter diggers, ammo hoarders and people who adhere to the shit’s-gonna-hit-the-fan- man! theory of world events (Nat Geo, Tuesdays 9 pm)