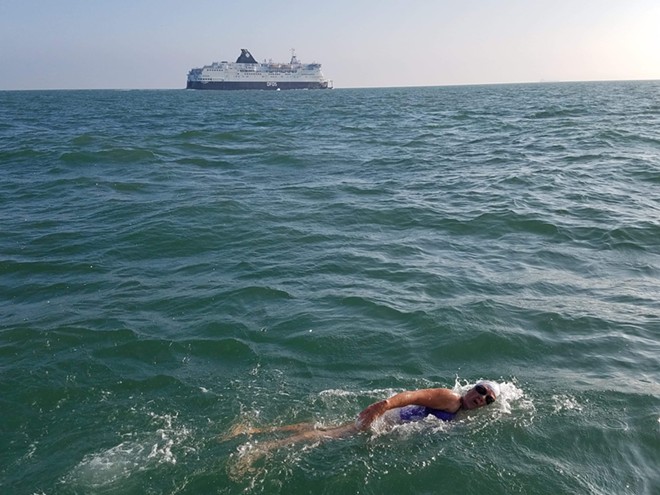 Courtesy of Robin Davis
Robin Davis was part of a two-person team to swim across the English Channel.

Robin Davis was staring at the cold, dark water. She wore only a bathing suit, and the November wind and rain stung her bare skin. She knew the water in Medical Lake couldn't have been much more than 50 degrees. But she also knew she had to immerse herself in it completely. Davis wasn't sure she was ready. Davis liked swimming — she swam competitively as a kid, decades ago. But she never liked cold water. She used to go to Payette Lake in McCall with her husband and kids, watching them all playing in the water, making fun of her for not jumping in. Those days were gone. A year ago, she and her husband were finalizing a divorce. Her kids had all gone off to college. She'd even lost her job as a pharmacist because she suffered a concussion that will likely affect her for the rest of her life. That's why she had to get in. As an empty-nester feeling like she was in desperate need of a purpose, she made it her goal to swim across the English Channel within a year. It had always been her dream.

She would train nonstop in nearby lakes. She would conquer her fear of the cold. She would inspire others. She would dedicate the feat to Whitney, her daughter's friend who was battling cancer. But first, she thought as she waded further into the lake, she had to take another step into the cold lake water. She was freaked out by the enormity of her decision, of what it would take for her, a 61-year-old woman who was not particularly athletic, who never won any races, who could barely immerse herself into a small lake, let alone the English Channel, to accomplish such a goal. Then she thought of other women who, like her, had been dismissed as older women. She thought of Whitney. Davis told herself once she swam across the English Channel, an all-day-long endeavor that even the best athletes fail to complete, she'd dedicate the feat to those women. She jumped in. Less than a year later, it's Oct. 4, 2018, and Davis can't get warm. She's on a boat that's taking a 26-mile route across the English Channel, from England to France. She had just spent an hour in the chilly water, without a wetsuit, before it was her relay partner Zena Courtney's turn to swim.

She and her partner took turns swimming across the Channel. One hour Davis, now 62, would swim, then the next interval she'd try to warm up in the boat while Courtney, 59, took over. They didn't know it at the time, but they were about to be the first American two-person relay team ever to successfully swim across the English Channel. During the swim, all they knew was that it was grueling. And freezing. "And we're not spring chickens," Davis says. "I was on the brink of hypothermia. [Courtney] got really seasick." In the boat, Davis would drink hot water and hold hand warmers. She wore a dry swimsuit, a shirt, sweatpants, socks, gloves, a jacket, two swim parkas, a hat a sleeping bag. And she was still cold.

By the time she warmed up, it would already be time to get in the water again.

Courtesy of Robin Davis
Davis couldn't get warm in between swimming intervals.

She'd spent the entire year training just for this. It started when her youngest daughter, Nora, went off to college. "She said to me, 'mom, you need a project,'" Davis recalls. "I was trying to figure out, who am I? My children are gone, I'm no longer an active parent, no longer working as a pharmacist, no longer a wife."

She always loved swimming, even if she didn't do it much anymore. As a child, all she'd wanted to do was swim. She didn't swim in college, but she'd later do triathlons. She liked open water more than indoor pools because she didn't like turns. Swimming across the English Channel was something she always wanted to do, but it always felt like more of a dream than reality.

So she decided to just do it. Once she was able to brave the cold water in Medical Lake last November, she gained confidence. She hired a coach. She started swimming at the YMCA in North Spokane before moving on to training regularly in Medical Lake and Lake Coeur d'Alene. It was far more challenging than she ever thought it would be. She was battling depression, and there were times when she would just get in the water and cry, thinking about her kids and where she is in her life.

For a while, she would get a headache every time she was in cold water. Then someone told her to scream under water to get rid of . She thought it was a joke, but then she actually did it and it worked. Now, she screams every time she dives in.

Eventually, the cold water was where she wanted to be. When she felt bad, she would go back to the cold lake.

"I hit the water and all that went right away," Davis says.

There have been 2,373 successful swims across the English Channel since 1875, according to the Channel Swimming Association. Several people have died . Roughly two-thirds of those who succeed conduct solo swims, and 804 are relays. While solo swims may be a more coveted athletic feat, relays have their own challenges, Davis says. Getting in an out of the water constantly can make you colder, and there's more time to think about not getting back in. A two-person relay is relatively rare. And a two-person relay by Americans had never been done before. 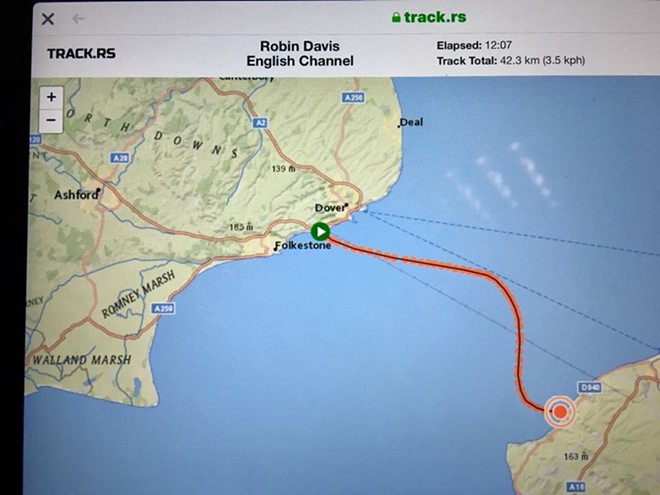 The route of the 26.2-mile swim across the English Channel.
Davis won't deny she was nervous before the swim. She saw professional swimmers fail.

Her partner at least swam in college at Stanford. But Davis?

She started slow. That's where the more athletic swimmers go wrong, she says. They start out too fast and get tired. Or they panic. When the guide in the boat that drives alongside notices a swimmer is struggling, they immediately pull them out and end it.

That didn't happen to Davis.

"I was getting tired, but I wasn't exhausted. That's just from the preparation. I actually was prepared and I wasn't cocky," she says.

A GPS device tracked where they were during the swim with a red dot, and Davis' daughters followed the little red dot from Bellingham, Washington. Laura Reed, Davis' older daughter, said she had no idea what to expect.

"I thought, whatever happens, I'm going to be proud of her," Reed says. "Even if she jumps in the water and that's it."

Reed says she started watching the little red dot representing her mother around 9:30 pm. Reed went to sleep around midnight, then woke up eight hours later and saw that the dot was still moving.

"That drove it home for me," Reed says. "I wasn't able to even conceive how far that is and how hard that must be until I was watching this slowly play out and knowing the whole time she was just swimming."

It took 12 hours and 18 minutes to complete the 26.2-mile swim from England to France. That's six hours of swimming each for Davis and Courtney. Their team name was Whitney's , named after Reed's friend battling cancer.

Reed says it meant a lot that her mom finished.

"There's been a lot of things going on that have been challenging recently, and so it really just was meaningful to me on that level to see this was her personal goal that she finished," Reed says. "I was really proud of her."

Davis says she was elated and surprised when it was over. She was also cold — it took hours for her to warm up.

Today, Davis is back in Spokane, living in a small home on the South Hill. She says she hopes her story inspires women like her who have been dismissed. She thinks of her friends who have been told they can only be a housewife, of any told they can't do something because of their age, of other empty-nesters who look back and see dreams they never realized.

"This was my strike for all of us," Davis says. "Hey guys, if I can do this, you can do this. Whatever your heart's desire is, don't give up on it.

"Because I'm a pretty regular person."

Her cat sprawls out on the couch, oblivious to the amazing feat his owner has just accomplished. On a dresser in the living room, she keeps mementos from her swim — rocks, sand  shells from the Channel.