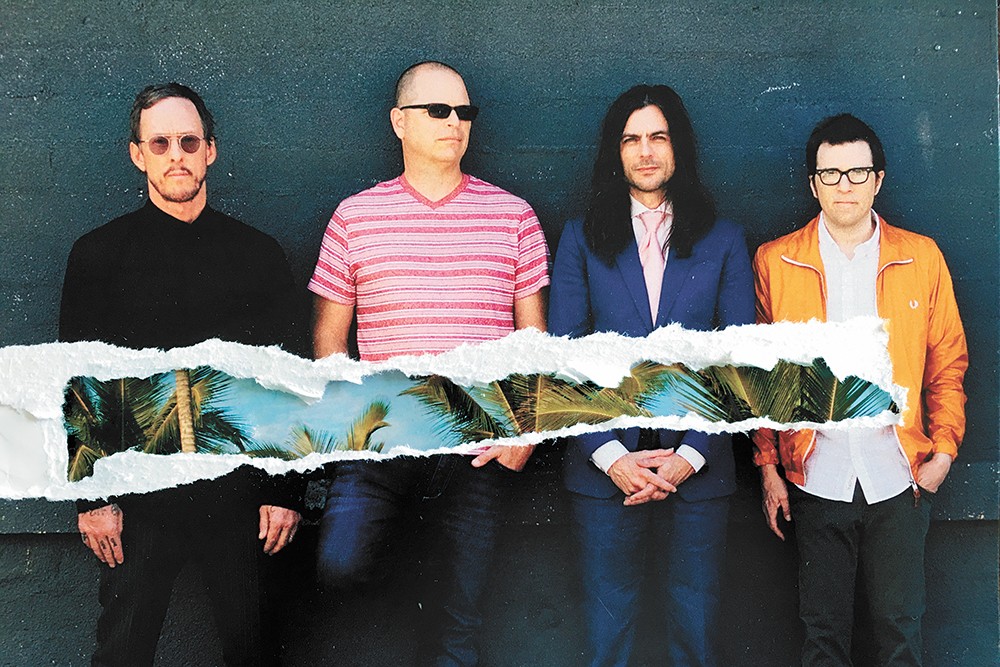 Weezer: So good and so bad.

Weezer is one of my all-time favorite bands. When they were at the top of their game, their music was culturally literate and emotionally vulnerable, catchy and full of personality and endlessly re-listenable. And yet there isn't another band that I love as much that has also produced so much music I hate.

The chasm between Weezer's best songs and Weezer's worst songs is so vast that Evel Knievel would refuse to jump over it. The prevailing attitude amongst so many superfans is that Weezer put out two of the greatest albums of the '90s — 1994's Weezer (better known as The Blue Album) and 1996's Pinkerton — back to back, went away for a few years, and then returned sounding like a parody of itself.

I've been thinking about this ever since Weezer announced a show at Northern Quest Resort & Casino — it's since been canceled — but it's hardly a new observation. The band's most ardent early supporters have been saying it for years. There was even a Saturday Night Live sketch that found host Matt Damon passionately defending the band's late period to an increasingly agitated Weezer purist played by Leslie Jones.

"You just don't understand what Rivers is going through right now!" Damon exclaims.

"I understand Rivers better than he understands himself!" Jones retorts after breaking a champagne flute in her bare hands.

That's how fans, even those who only revere the first two albums, talk about Weezer and frontman Rivers Cuomo. He's just "Rivers." He was once so nakedly honest in his lyrics, particularly on the diary entries-set-to-music that make up the band's sophomore LP Pinkerton, that we feel like we know him, like we're on a first-name basis with him.

Pinkerton is arguably Weezer's masterpiece, a raw, feedback-drenched catalog of Cuomo's own romantic entanglements and personal insecurities, filled with emotional admissions that few rock stars would ever have the guts to voice in public. It's the dictionary definition of a cult classic, derided upon release and now widely considered a genre-defining record. In 1996, Rolling Stone readers voted it one of the worst albums of the year; by 2002, they had decided it was one of the greatest albums of all time.

Fans have theorized that the initial response to Pinkerton is specifically what brought about the end of Weezer's golden period. Rivers had, to quote his own lyrics, made a record of his heart, and the general public had rejected it. Their third album, also called Weezer but known colloquially as The Green Album, dropped in 2001, and singles like "Hash Pipe" and "Island in the Sun" were slickly produced but missing the verve of their earlier work.

I was a teenager at the time, and those new songs led me back to the (much better) older ones. It wasn't until the 2005 single "Beverly Hills," still the band's only song to crack the Billboard Top 10, that I joined the naysayers' camp: It's a fatuous ode to California wealth that's also kind of taking the piss out of it, but it's not sharp enough to work as either tribute or satire. I wasn't mad. I was just disappointed.

"Beverly Hills" is driven by a kind of tongue-in-cheek detachment that poisons the band's next several albums: It was as if Rivers was afraid of baring his soul like he had on Blue and Pinkerton and so decided to use irony as armor, writing deliberately silly songs about partying and chasing girls even as he creeped toward his 40s.

So I grew resentful: Here was a guy who had once spilled his soul onto wax and was now cashing in on name recognition and sleepwalking through mediocre pop garbage.

It wasn't until I became an actual adult that I realized it was a waste of energy to resent a band for not conforming to my own notions of what they should sound like. If Rivers was happy making silly albums with titles like Raditude, then why should we decry him for no longer treating the recording studio like a confessional?

And besides, I can revisit the old stuff whenever I want. I still know every lyric on Pinkerton. I've hung onto a vintage Weezer shirt that I bought at Value Village in 2002 or 2003, and I wear it often despite it having a huge hole in the left armpit. I've been skimming through the band's later period as I write this, and even though some of it is damn near unlistenable (if there's anything more embarrassing than middle-aged white dudes covering "No Scrubs," I don't want to hear it), I'll occasionally unearth a gem that I'd previously never given the time of day.

I've only seen the band live once, but it's one of the best concert experiences of my life. It was in 2011, as the band was in the middle of a mini-tour catered specifically to old, cranky fans like me: They played every song from Blue, took a break, and then played every song from Pinkerton. And that was it. Everyone in the crowd knew all the words, and we all sang along with the ferocity and earnestness of a church service. There was a sense of togetherness in that concert hall, the overwhelming feeling that these songs were just as formative to thousands of other people as they were to me.

The Weezer show scheduled for July 14 at Northern Quest Resort & Casino has been canceled along with the rest of the venue's 2020 summer slate. A rescheduled 2021 date is in the works.