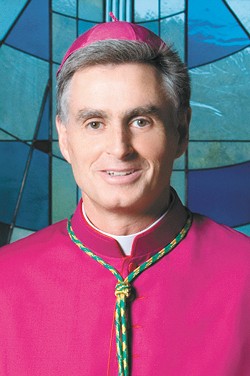 has found himself thinking about Charles Borromeo.

Borromeo was a saint who spent his last days in Milan during the plague in 1576, driving himself deep into debt as he tried to feed tens of thousands in famine, staying in the midst of the sickness even as other leaders had fled.

"The church has been through plagues and epidemics and outbreaks for centuries," Daly says.

But he's also well aware of the fact that many of the church's most powerful aid during a normal natural disaster — the ability to bring people together into one spot, to give them comfort and community — carries the danger of spreading the coronavirus.

And so Daly had to answer the question: "Do you cancel Mass?"

There was "the reality of so much unknown and the fact that people were dying," he says, yet there was also the obligation the Catholic Church has for "caring for people and not running from them and abandoning them."

At first, he balked: Daly's an old-school Catholic, the sort who's decried church leaders who bend too quickly to fit in with the rest of society.

"I talked to a bishop in California, who's had a similar experience," Daly says. "He kind of looked at the priests who are wanting to, you know, 'cut and run,' and he found them to be basically guys who that's their approach to a number of things. Kind of a more selfish approach."

Initially, Daly held off on a full-scale cancellation and was flooded with thank yous, with parishioners telling him things like, "'We feel that we can take proper precautions, but don't cut off the sacraments from us.'"

But days later, he changed his mind: Talking to people he trusted who were worried about hospitals being overwhelmed, he felt he had to say, "You know, for the good of the people we're going to end the public masses.

"One priest told me, 'It must be like an occupied country where, you know, the occupation force is this disease,'" Daly says. Maybe, he speculates, it will shake us from our "complacency."