This year we murdered Buzzworthy and went through months of labor to birth Bands to Watch. Ouch.

We killed our 4-year-old. Buzzworthy Bands, the main feature that drove our annual Local Music Issue? Dead by our own hand.

The MTV Buzz Bin a la 1993 nomenclature was part of it — the Gin-Blossoms-and-Tori-Amos-ishness of it all. Poor community participation didn’t help either.

And so we canned our process of polling every Tom, Dick and Harry in the local music community for who their favorite new bands were. Instead, we decided to focus on artists who are really pushing it this year. Bands who you absolutely must pay attention to — people bringing something totally remarkable to their stage show and songwriting.

We wanted to find the artists who are bending the rules of genre and redefining what it means to be a performer.

But we also wanted to make sure that we weren’t only recognizing musicians of one type. Black metal, bluegrass or hip-hop, we wanted to ensure that everyone was being considered in the process.

To do this, we assembled a committee of some of the most invested individuals in Spokane’s music scene. People who live for shows at Sunset Junction and Empyrean, who are planning, booking, promoting and rocking local musicians on their headphones. Our Local Music Committee started meeting back in February — discussing more than 65 local artists and sifting out the very best bands of the year. Here’s who helped us.

PATRICK KENDRICK
Founder and booker of Platform Booking — which brings live music to Sunset Junction, Mootsy’s and Empyrean. One of the core founders of Terrain. Wine pusher.

LUKE BAUMGARTEN
Current Arts & Culture Editor for The Inlander. Former Music Editor. Pens music features for Billboard magazine. One of the core founders of Terrain and board member for the MAC’s BeGin! events. Pug lover.

BILL POWERS
Longtime booker for the Production Company and the just-closed Blvd. New owner of the Seaside — the new name for the Blvd space. Bassist in intermittently defunct band Mourning After. 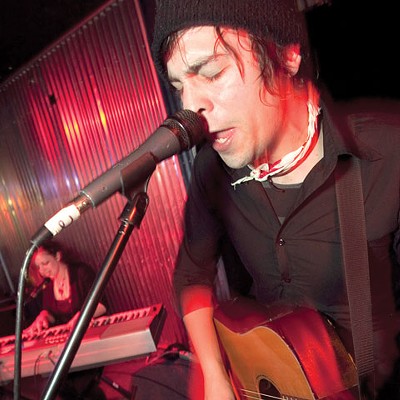