Themes, characters in latest Planet of the Apes as sophisticated and detailed as its special effects 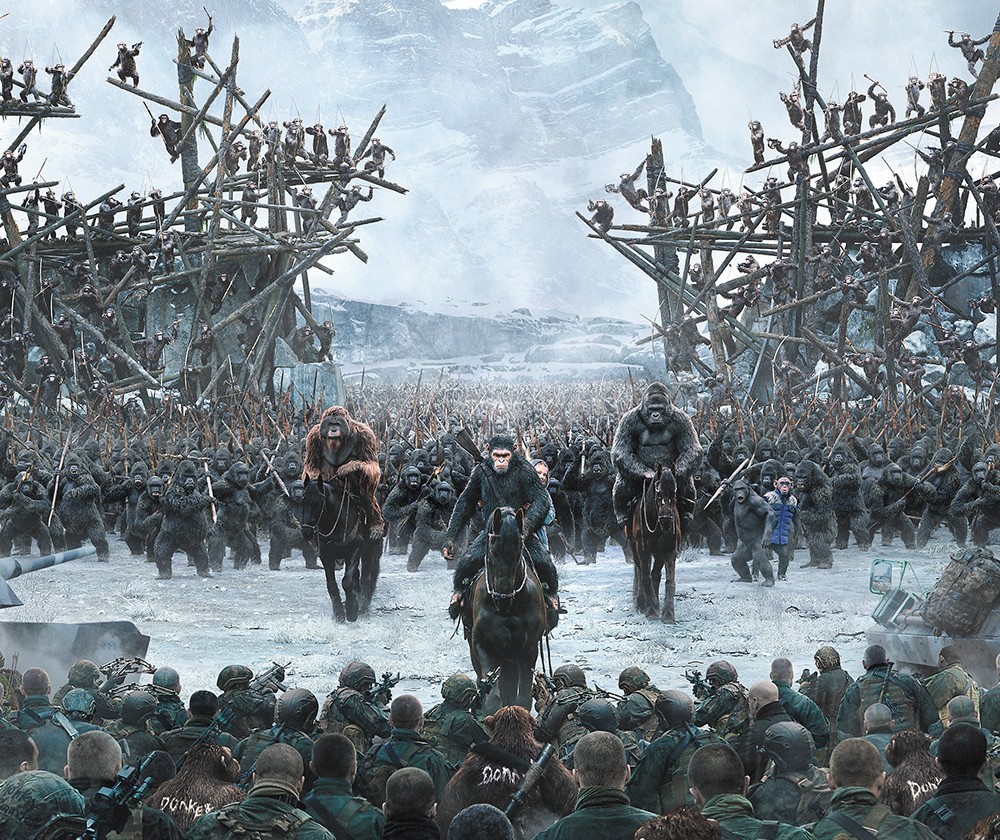 This is not your typical war movie, and it's better for it.

There isn't much battle action in War for the Planet of the Apes, but it still feels like a war movie

— a World War II movie, specifically, set largely in a wintry prison camp, with some captives collaborating with the enemy in the vain hope of postponing their own deaths while others make escape plans. It's a melancholy film, but a hopeful one, with a combination of technical wizardry and soulful acting that's nothing less than extraordinary.

Onscreen titles summarize where we are after the first two Planet of the Apes prequels, Rise and Dawn. The man-made virus that made apes smarter also wiped out most of the human population, and its effect on the survivors is still unfolding. In the two years since the previous chapter, ape leader Caesar (Andy Serkis in a motion-capture suit) has been in the forests of Northern California, marshaling his monkey armies to defend themselves against the humans who are still trying to destroy them.

Caesar differentiates himself from Koba (Toby Kebbell, seen in flashbacks), the furious ape he conquered in the previous film, who wanted to exterminate the humans altogether. Caesar only wants to be left alone. But after a devastating raid on the apes' camp leaves him personally bereft, Caesar finds himself slipping into thoughts of angry retribution. These emotions put the group at risk, reviving the theme of the whole series: that to become "human" means taking on humanity's flaws, too.

Among the actual humans, things are also grim. Led by a monkey-hating madman called the Colonel (Woody Harrelson), a group of rogue soldiers has taken possession of a weapons depot and turned it into a P.O.W. camp for captured apes, using them as labor to fortify the place against the humans who want to stop the Colonel's unauthorized extermination plan.

Much of the film concerns the efforts of Caesar, his kind-hearted orangutan lieutenant Maurice (Karin Konoval) and tribe members Luca (Michael Adamthwaite) and Rocket (Terry Notary) to free their fellow simians from the prison. They're aided by two new additions, a sweetly self-doubting zoo chimp who thinks his name is Bad Ape (Steve Zahn) and a mute human girl (Amiah Miller) who was orphaned in the fighting and develops a friendship with Maurice.

These characters give Caesar an opportunity to embrace or reject one of humanity's good qualities — empathy — besides giving director Matt Reeves (returning from Dawn of the Planet of the Apes) and his team a chance to show us how engaging a batch of nonexistent, non-human creatures can be. Watching the film, I often marveled at how emotionally invested I was in Caesar, Maurice and the rest, and at how expressive their faces and body language are, realistically ape-like in movement yet uncannily human, too. We've come a long way from guys in latex suits whose mouths barely moved when they talked. These advances, accompanied by good writing and acting, have opened the door to a whole new world of storytelling possibilities.

Caesar is a great leader — stoic, resolved and self-sacrificing, but flawed in his anger. Serkis, working from a screenplay by Reeves and Mark Bomback, gives him the weight of a tragic Shakespearean figure, as nuanced and measured as the best live-action performances. Likewise, Konoval as Maurice, who still communicates in sign language, conveys complex emotions without saying a word.

Reeves' tone is a sad one; in a saga that must end with humanity decimated and ruled by apes, how could it be otherwise? But it's sad in thoughtful ways, with constant visual reminders of the historical and cultural events that the fictional story parallels. When we see apes (derisively nicknamed "donkeys") collaborate with the Colonel, it's hard not to think of the Nazis' Sonderkommandos, and to reflect on the complicated motives behind such actions. Religious references abound, both subtle and obvious, with Caesar acting as the savior (or at least the Moses) of his people while the Colonel sets himself up as a messiah for his own group (which is called Alpha-Omega and seeks to save humanity).

It's a heavier, more thoughtful summer blockbuster than usual, focused on character more than action. If there were some way to hide the fact that it's about talking monkeys, I suspect it would have been released during the end-of-year prestige-movie season. It has that kind of dramatic heft to it. The apes might be taking over, but man, they earned it. ♦

War for the Planet of the Apes is not showing in any theaters in the area.