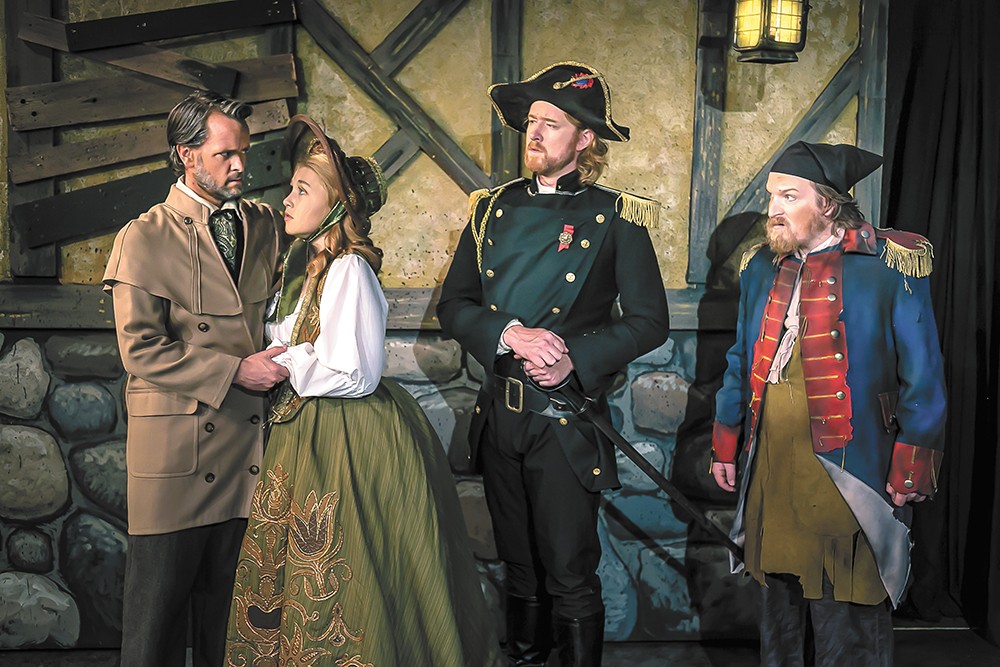 in deciding to stage Les Misérables.

The first concerns timing. It was only last September that the Spokane Civic Theatre opened its season with the same musical (wider performance rights were just made available for the first time in June 2013). To follow so closely on the heels of that sold-out production, which itself followed the immensely popular 2012 cinematic version of the musical, put a great deal of faith in audiences' undiminished enthusiasm for the stage adaptation of Victor Hugo's 1862 novel.

The second has to do with scale. Les Mis is nothing short of grandiose — in scope, sentiment, spectacle, sound — and responds to confinement in the same way an atomic blast or a sharknado might. To bring such a production to a stage so often euphemistically described as "intimate" clearly requires a process of economization beyond the one that turned Hugo's roughly 1,500-page epic into a three-hour musical, albeit without sacrificing the qualities that have endeared Les Mis to theatergoers for just shy of 30 years.

But Lake City has proven itself to be a theater that relishes risk, not least in its recent subsumption of the chronically beleaguered Interplayers Theatre, and if the full-length Les Mis is to be miniaturized without being diminished, then this is the theater with enough chutzpah and chops to attempt it.

Much of this miniaturization is achieved through efficient set design: a revolving floor to simulate wandering or to feature double-faced sets, key set pieces that merely suggest a location (in keeping with the musical's episodic nature), an intermediate curtain, a trap door, unexpectedly utilitarian walls. This production doesn't skimp on feverish scene changes, but its Parisian sewers are sketched only by the plink-plonk of water and a greenish hue, and its action ultimately spills out among the audience and through the entry doors.

As the misunderstood criminal with a heart of gold, Haynie has good presence, though his voice can seem attenuated, particularly when juxtaposed with Bell's sonorous baritone. Hauenstein's devious innkeeper is as sinister as he is comic; he's aided and abetted well by Huskey. As Fantine, Briane Green tends to overemote, which is either a cause of or response to a touch of vocal fatigue. The surprise and delight of this production is Fiedler, whose Eponine is movingly sympathetic without being sappy, and whose singing is effortlessly full and rounded, with the occasional hint of jazz-club smokiness. Ably led, as usual, by Zach Baker, the six-person orchestra keeps with the esthetics of the production, translating Les Mis' symphonic score to the chamber level. ♦