The Belko Experiment is predictably bloody and brutal, but it wavers too much when it comes to satire 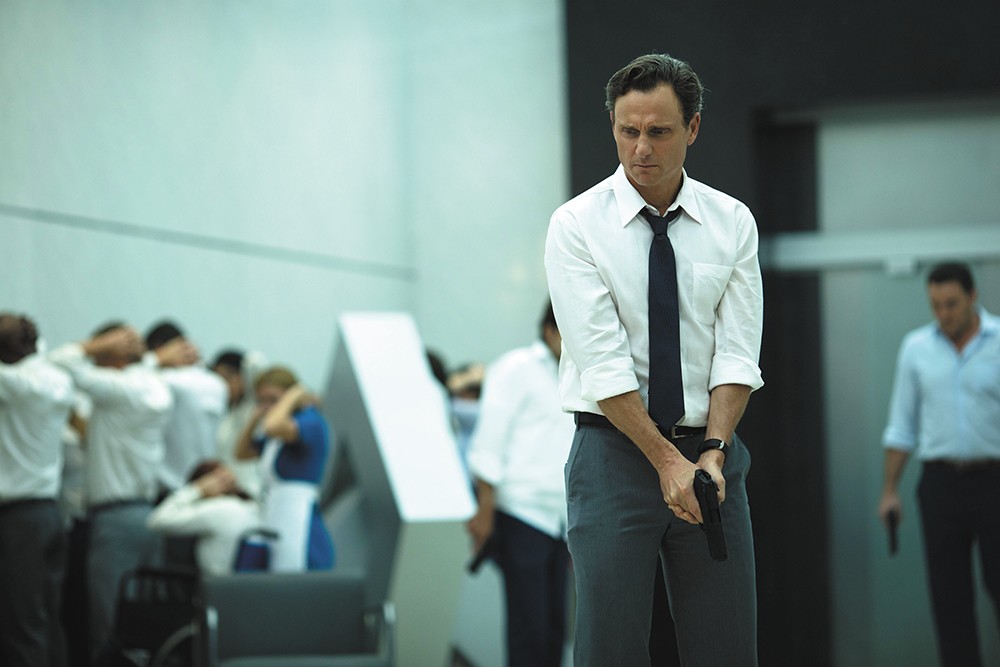 Not exactly a team-building exercise.

The Belko Industries building stands like a concrete monolith

in the middle of the Colombian countryside, the rural area's only reminder that it's the 21st century. The company is, we're told, some kind of international headhunting firm, staffed primarily with foreign workers, all of whom have had tracking devices implanted at the bases of their skulls (because the kidnapping rate in Colombia is so high).

The Belko Experiment opens on a seemingly nondescript morning, though things turn south almost immediately. The building's high-tech security system is activated unexpectedly — impenetrable steel plates cover all the windows and outside doors — and a voice comes over the intercom to deliver a grisly ultimatum: If the confined employees don't kill 30 of their co-workers in two hours, then 60 of those tracking chips, which are actually explosives, will be detonated.

The group immediately divides itself into factions: There are those who start searching for a way out, led by the bland but moralistic good guy (John Gallagher Jr.), and those who become bloodthirsty murderers at the drop of a hat (among them Tony Goldwyn and John C. McGinley). Even though this office building comes complete with an arsenal of semi-automatic weapons (because Colombia is so dangerous), you had better believe that the "good guys" put tape dispensers and paper cutters to bloody good use.

This is an OK setup, a sort of white-collar riff on the 2000 Japanese cult classic Battle Royale. And it's relatively well-made and occasionally stylish, with director Greg McLean (Wolf Creek) and screenwriter James Gunn (Guardians of the Galaxy) obviously channeling the blunt, low-budget grindhouse fare that Roger Corman was producing in the late '70s. (Even the old-school Orion Pictures logo that kicks off the film is no doubt designed to elicit a kind of grimy nostalgia.)

Last month, critics were (rightfully) hailing Jordan Peele's Get Out, which made a monster out of white liberal racism, as the definitive horror film of the Obama era. And now here we have the first true Trump-era horror film, in which the dog-eat-dog nature of corporate capitalism and the toxicity of alpha-male cronyism are allowed to escalate well beyond their most logical extremes.

Though The Belko Experiment at first appears to be commenting on our current sociopolitical climate, that's mostly incidental — Gunn reportedly completed the script years ago — and even so, it doesn't have much to say that we haven't already heard before. There is a thread of pitch-black humor running throughout, but it's perhaps not overt enough, and because everything that surrounds it is so irrepressibly grim, the tonal shifts are sometimes jarring.

I suppose Gunn deserves some kind of recognition for committing so completely to his premise: The movie is unapologetically brutal, brazenly killing off characters you'd normally expect to make it out alive in a kill-or-be-killed thriller. You realize quickly, though, that The Belko Experiment isn't really about anything, other than its own predilection for violence. And even by those middling standards, it's only fitfully original. ♦

The Belko Experiment is not showing in any theaters in the area.