Have you seen or read The Hunger Games? You know, the one about a post-apocalypse world, teen angst and an innocent-young-girl-turns-into-political-warrior plot line? Here it is again, but in low-rent, watered-down form. And like The Hunger Games, Divergent is the first of a book-film trilogy (with Insurgent and Allegiant already hit novels).

In this imitative version of that story, it's 100 years after "the war," and society has been broken down into five factions, membership in which everyone must choose when they turn 16. Faction names include Abnegation, Amity, Candor, Dauntless and Erudite. You can stay with your family's faction or join a different one, where you will remain for life, unless you become "factionless" (a new word for homeless).

It takes place in a time when the education system must be in good shape, because if I had to choose one of those factions, the name of which explains what they're all about, I wouldn't know where to start. I understand what "candor" and "erudite" mean, but who among this story's 16-year-olds and the young adult readers this series is aimed at is going to know what "abnegation" means? Or "amity" or even "divergent"?

So young Tris (Shailene Woodley) turns 16, goes, as she must, for her "faction aptitude test," finds out she's suitable for multiple factions (meaning she's Divergent; now you don't have to look it up), then chooses to leave her Abnegation family and become Dauntless (sorry, those you do have to look up).

We get an action film with hints of a budding love interest taking place in front of a coming-of-age backdrop, everything happening amidst some confusing political intrigue. Adults (Kate Winslet and Maggie Q among them) make only brief appearances, as the story stays mostly with the young characters: ever-toughening Tris, seemingly emotionless Dauntless trainer Four (Theo James), and bullying Dauntless leader Eric (Jai Courtney).

While British TV actor James is OK in a one-dimensional sort of way, Woodley (The Descendants) just isn't strong enough as a lead character, and the director should have found a way to keep her from constantly, rapidly moving her eyes back and forth in close-ups.

In fairness to the writers, it's a faithful adaptation of the book. Unfortunately the book isn't very good, and the lengthy film starts to drag until it reaches its big, dumb climax. But there will be fans. And they'll only have to wait a year for the next one. Insurgent is set for release on March 20, 2015. ♦

Divergent is not showing in any theaters in the area. 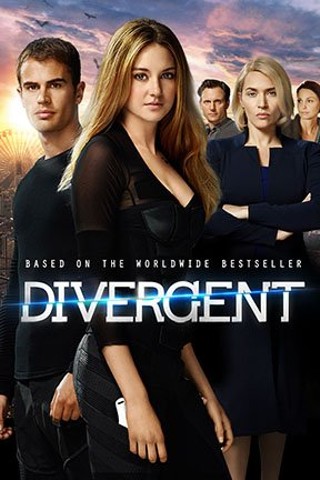