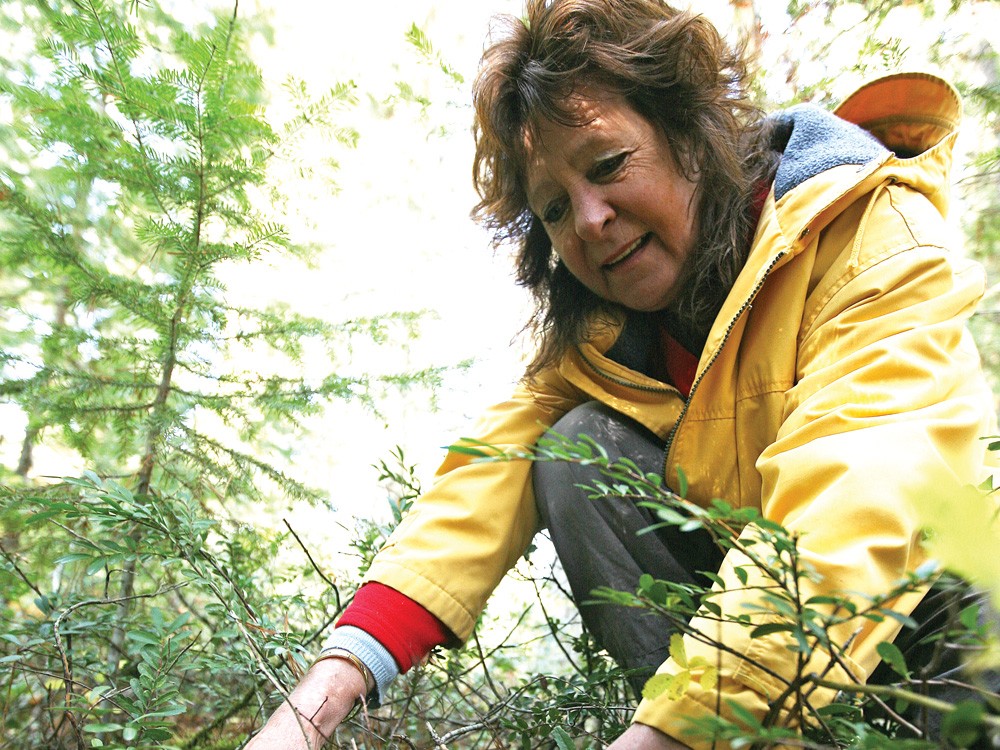 “Bow to the matsutake gods,” bellows Lynda Foreman as she squats over a bulbous white mushroom. With one hand she unearths the mushroom, twisting it out of the Priest Lake soil like a corkscrew.

The mushroom goes straight to her nose. Some books claim the fungi smells like cinnamon and dirty socks, but Foreman smells more socks than cinnamon. She quickly stashes the mushroom in a Walgreens prescription bag.

“These sell for hundreds of dollars in Japan,” Foreman says, speaking to a woman who now roots through the ground, digging into divots filled with an ash-like substance that the mushroom produces. She can’t find any more matsutake, but this is the biggest find of the day. It’s been a dry season, and other mushroom pickers (or bears) might have gotten the rest.

David Arora’s Mushrooms Demystified is the holy grail of mushroom books. A new copy of the book sells for upwards of $60 and is commonly carried behind glass cases at bookstores. Local expert Lynda Foreman says the book is the absolute best resource to identify different families of mushrooms. For a lighter in-the-field version of the book, pick up Arora’s All That the Rain Promises and More: A Hip Pocket Guide to Western Mushrooms. Although the book is extensive, Foreman is quick to note that the information is specific to mushrooms in California, Oregon, and coastal areas.

For regionally specific information, Foreman suggests University of Washington professors Steve Trudell and Joe Ammirati’s book Mushrooms of the Pacific Northwest. This guidebook covers the geographic range of Oregon, Washington, southern British Columbia, Idaho, and western Montana, with an emphasis on the low- to mid-elevation forest habitats of western Oregon and Washington.

The Pacific Northwest Key Council was developed in 1974 by a woman in Post Falls, Idaho. The council provides a complete online (downloadable and printable) list of every identifiable mushroom in the Pacific Northwest. Visit: svims.ca/council

MatchMaker Mushrooms of the Pacific Northwest is a downloadable application for your phone, computer or notepad. The application poses a series of questions (What color is the cap? Does it have gills or pores?) and, by process of elimination, identifies the mushroom. Visit matchmakermushrooms.com. (Jordy Byrd)

But the 10 members gathered today from the Spokane Mushroom Club don’t seem discouraged. Underneath a dark canopy of trees, past piles of bear scat, and up and over the mossy fallen logs that crisscross the Idaho forest, there are still mushrooms to be found, like the white, ghost-like, fluted chanterelles; the brown honey mushrooms known for their sweet taste; the white puff balls; the Slippery Jacks — thick slimy brown mushrooms that taste like beef.

For 28 years, Foreman has led the group on hunts into the remote forests of the region, where she says over 3,000 mushrooms grow — some of which haven’t even been identified. And after those 28 years, even she can’t identify all of them.

“Well do you know what this is?” he asks again, holding up a bright orange and brown mushroom with gills that looks damp and meaty like a starfish.

“Oh yes, that’s Gomphus floccosus,” she says. “You don’t want that. That will completely ruin your liver.”

There are wild-food foragers and casual huckleberry pickers. And then there are mushroom hunters — whose secrecy and tenacity outpace that of any of their foraging brethren.

The Spokane Mushroom Club was founded in 1965. Foreman says the group was formed in an attempt to identify local mushrooms and eventually spawned the Pacific Northwest Key Council — an organization that codes and identifies regional mushrooms. The group was founded with fewer than a dozen pickers, but today boasts 80 families in its membership.

But if you can’t identify the mushroom, you will need to dig up the entire mushroom — including the attachment or root bulb. Next, gather three different stages of the mushroom — the button, a medium-stage mushroom, and one with a fully extended cap. Once you’ve collected all three samples, take your mushrooms home and do a spore print on the fully developed mushroom. Next take a spore print of the fully developed mushroom. Consult your identification book for details. If the mushroom is identified as being edible, still use caution.

“You just have to be careful what you eat,” Foreman says. “If it’s an edible, cook a small amount and eat one teaspoon of the mushroom. Wait a couple of hours and if you don’t have any intestinal distress, enjoy.” (Jordy Byrd)

The club discourages commercial picking and instead refers to themselves at “pot pickers” — meaning they only pick enough to cook with. Foreman leads the weekend forays into the woods throughout the spring and fall.

“Mushroom season starts in the spring when the conditions are rainy and the weather is warm,” Foreman says. “We organize our forays when we know the mushrooms should be out.”

Morels are the first edible mushrooms, fruiting as early as April. At the start of the season, Foreman uses thermometers to measure ground temperature and thus gauge optimal mushroom picking. Usually the fall season is ripe with mushrooms, but this year’s hot and dry August temperatures made for slim pickings.

Although Foreman won’t reveal the group’s exact picking locations, she says that certain mushrooms have a symbiotic relationship with trees. For example, morels commonly grow around Grand Fir trees.

Instead of randomly foraging through the woods, Foreman recommends that pickers get started with a mushroom guidebook and join a group of knowledgeable pickers before consuming anything found in the wild.

“There are several mushrooms in the amanita family that grow in our area,” Foreman says. “Some amanitas will cause liver failure 10-12 days after eating them.”

But the potential threat doesn’t concern most members of the Spokane Mushroom Club. They follow their guidebooks and Foreman’s advice. Mostly they’re happy traipsing through the woods, heads down, looking for fuzzy pink or velvety red mushrooms.

On last week’s hunt, they examined the lime green gills of a mushroom that grows along roadsides, searched for mushrooms that taste like almonds and hunted for the Hypomyces lactifluroum — the mushroom that tastes like lobster. Aside from the matsutake, Foreman leaves the picking to the rest of the group.

“I’ve had my thrills over the years,” she says. “I’d rather get other people hooked on mushrooms.”