And that's a problem for our sustainable future 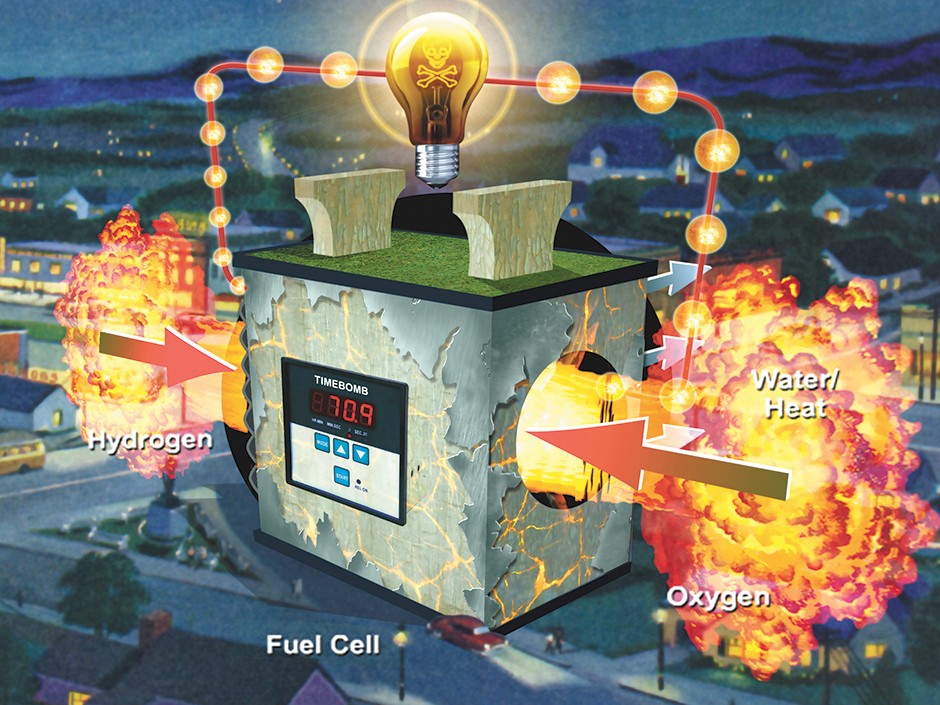 In the cars and homes of the future, the substance flowing through our pipes and to our engines, powering our lights and cars, could be hydrogen. Clean and easy to produce, it’s a source many scientists believe could someday help get us off oil for good.

“Hydrogen is a clean fuel no matter what, and it’s abundant,” says Patrick Ferro, the chair of Gonzaga’s mechanical engineering program. “There’s a vision for going to kind of a hydrogen economy.”

But with hope comes unanswered questions. Because hydrogen atoms are the smallest of the elements, they have a special ability to wriggle into other materials, like metals, at the molecular level, changing the way those materials behave. Now, scientists like Gonzaga’s Patrick Ferro and his students are trying to better understand how that happens and just how much hydrogen makes a difference.

Scientists have long known that large amounts — or “supersaturation” — of hydrogen can affect metals, but Ferro and his students are finding that even small exposures can change metals like stainless steel. In that case, even those materials being used for some of the smaller parts of hydrogen-powered infrastructure could fall victim to hydrogen.

Fuel cells, for example, create electricity by exposing hydrogen to oxygen and electrodes, and that electricity is used to power a light bulb or a battery that powers a car. So along with the storage tanks where it starts, the hydrogen affects any valve or plumbing it touches along the way.

When hydrogen worms its way into a metal, it squeezes between the metal’s atoms and changes their ability to move past each other, affecting the metal’s capacity for bending or stretching. That can become especially dangerous. The hydrogen makes the metal more brittle so when it breaks, it does so — as Ferro and other scientists say — “catastrophically.” There’s no warning. It doesn’t bend much first.

“As engineers we like things, if they do fail, we want them to fail in a ductile fashion, kind of a safe and gooey and lots of warning,” Ferro says, “but if the hydrogen changes the way metal fails, to now it fails brittlely, that’s more dangerous.”

And since hydrogen is flammable, a catastrophic breakage of a tank or pipe holding it can result in fire. (Ferro is quick with caution about this issue. Yes, hydrogen is flammable, he says, but so is the natural gas we use in our stoves and barbecues. “Ever since the Hindenburg there’s been an unnatural fear of hydrogen gas,” he says. “It is to be respected, but … you just have to be careful.”)

In a high-ceilinged room on the first floor of Gonzaga’s Herak Engineering and Computer Center that looks like part laboratory, part garage, Gonzaga senior Allie Anderson places a bow-tie-shaped piece of stainless steel vertically in a machine that grips it by each end. With a few taps on a nearby computer, the machine rumbles to life and begins slowly pulling the piece of metal by each end. About 10 minutes later, the middle of the piece snaps and the machine stops pulling. In sample after sample, Anderson goes through this same process, comparing “virgin” samples to those she’s stored in a beaker filled with hydrogen for up to a week. In another lab across the hall, junior Michael Beckett is looking at the same thing in a different way. He puts the same small pieces of steel on a machine that bends them back and forth until they break, as a machine counts the number of times they bend. Both students have found that even small amounts of hydrogen exposure make the metal more brittle, meaning it breaks quicker or with less stretching and bending beforehand than an unexposed sample.

Now, as Ferro and other researchers around the world start to quantify how much hydrogen affects which substances, they’re looking to form a database of their findings and which materials might work best for certain types of projects.

Ferro knows his lab is small relative to others, but he’s hopeful. His students may have to send out samples to have them “supersaturated,” but that’s encouraging them to focus on smaller amounts others may be ignoring. Supersaturation has long been considered, but smaller or shorter exposures may be getting less attention. Plus, science is strengthened by multiple verifications.

“We studied the lower exposure levels … because we can,” Ferro says. “There is that possibility in the hydrogen infrastructure that components are going to be influenced by small and subtle levels of hydrogen, and we do want to know what … might arise from that so we can take precautions in design. That’s how we contribute.”