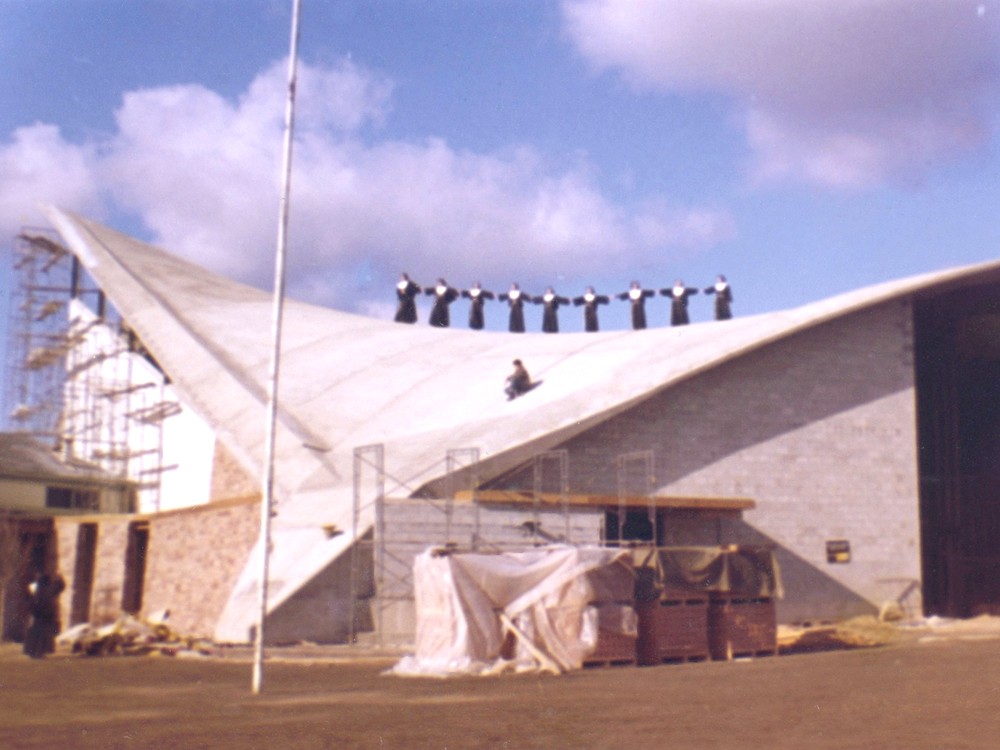 Nuns from the St. Charles Convent tested the roof’s strength during construction in 1960.

This weekend, Spokane is the host city for the annual conference of the National Trust for Historic Preservation. Included among the sites to be toured by preservationists from all over the nation is the Church of St. Charles Borromeo in northwest Spokane. Not normally considered a must-see site by Spokanites, the church is, nevertheless, an overlooked — and underappreciated — gem of Spokane architecture.

The Spokane firm of Albert Funk, Donald Murray and Carl Johnson designed St. Charles Church in 1959, with a distinctive roof of three-inch thick concrete secured on only three legs. From the outside, the roof resembles a saddle. From the inside, sculptured stained glass “sky windows” just below the roofline create the illusion that the ceiling “floats” over the pillarless interior. Engineers call the design a hyperbolic parabolic, which has to do with the principle of developing strength through folded planes. It might remind you of a Pringles potato chip. 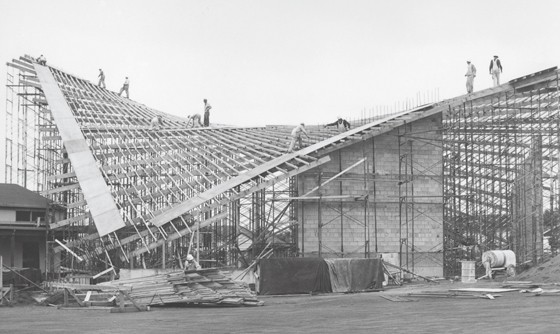 The shape provides the roof’s strength, not the amount or type of materials put into it. The consultant on the project, Professor T.Y. Lin of the Structural Engineering Laboratory at the University of California, Berkeley, held that the mixture of reinforced steel with concrete, when properly “folded,” made steel beams seven times stronger than normal. The design was a bold undertaking inasmuch as hyperbolic parabolic forms had been used in Russia, Europe and New Zealand, but at that time never in America. A similar design, the TWA Building at Idlewild Airport (JFK International Airport) in New York City, was just under construction. The concept of a thin shell concrete roof supported by buttresses remained so strange to observers that the architects had to build a scale model before construction firms would even bid the job.

Complimentary to the unique architecture, a little-known artist named Harold Balazs won the commission to do the metalwork for the church. A young graduate of Washington State College, Balazs received kudos for a mural he and Patrick Flammia prepared in 1951 for the Ridpath Hotel. Balazs made ends meet for his young family by teaching classes at the YWCA and the Spokane Art Center, so the architects viewed him as not only an up-and-coming artist, but also as someone available to devote full time to the project. 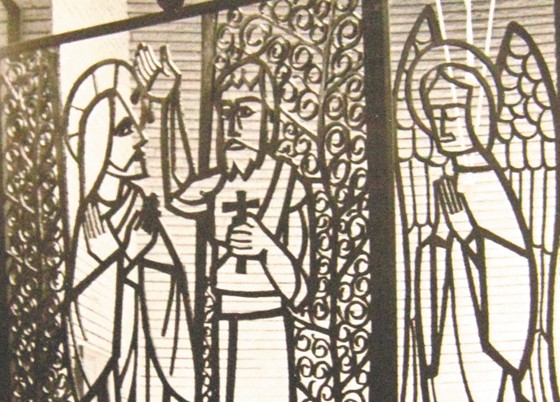 Balazs mounted a 17-foot-tall contour sculpture of St. Charles Borromeo in welded black metal on the curving brick wall at the front of the church. His most intricate artwork, however, appears on the enamel door panels, which depict the life of Christ. The use of narrative art on doors is an Early Christian tradition that can be traced to 28 cypress wood panels on the portal of the 5th Century Basilica of Santa Sabina in Rome. Each of the 12 panels torched-fired by Balazs sits flush to the edge of the door with no framing elements, thereby making them external murals. Small, irregularly shaped plates are held in place with tiny nails spaced two inches apart. Together the plates form the panels. In all, there are between 780 and 800 small plates on each door and upwards of 10,000 brass nails.

Inside St. Charles, the architects asked Balazs to fashion ironwork for the baptistery gate, for the 6-foot-high altar crucifix of nickel-plated steel, plus the grillwork on the main and side altars.

If Balazs was at the beginning of his career in 1959, the commission for the interior glasswork and windows for St. Charles went to an old hand, 57-year-old Gabriel Loire of Chartres, France — the reigning expert in “faceted glass,” an artistic technique that sets thick, chipped pieces of glass into a mortar of epoxy resin. They are like flagstones of glass. Loire first gained prominence rebuilding stained glass windows in churches damaged by World War II. The stained glass for St. Charles was set in France and shipped to Spokane for installation. 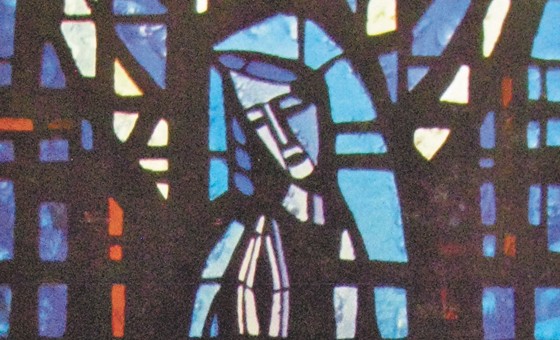 From its establishment in 1950, St. Charles Parish planned to build a church on its eight-acre site on Alberta Street just south of Wellesley Avenue. During its first decade, the parish dedicated a school, a convent for nuns and a rectory for priests. The pastor, Father Oakley O’Connor, then turned his attention to a church. In January of 1959, parishioners formed a fundraising team for a new church that could seat 800. In July, a bid of $324,832 won the building contract and construction began immediately. Except for the installation of the 13,000 square feet of stained glass windows from France, Spokane firms accomplished nearly all of the work on the church.

At its completion in mid-1961 — just over 50 years ago — St. Charles Church became the largest unbalanced hyperbolic parabolic structure in the world. Few buildings in Spokane can match the pedigree of St. Charles Church, yet it’s been largely forgotten. Until now.

Robert Carriker is a history professor at Gonzaga University and a parishioner at St. Charles Church.