'I am a farmer and conservationist,' says Spokane's Suzy Dix, 'and I do real estate to afford the other two' 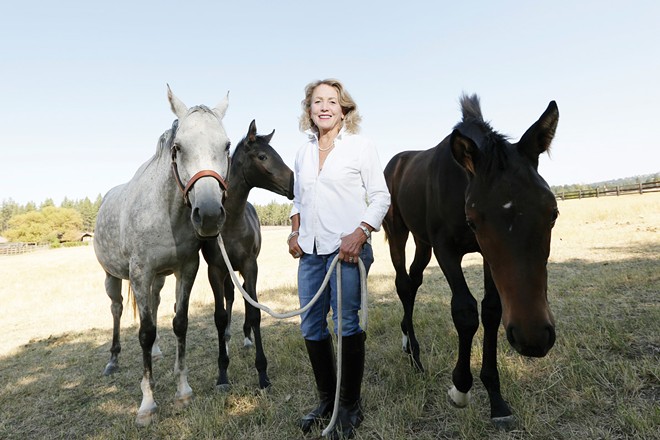 Within minutes of meeting Suzy Dix on her farm south of Spokane, three things are immediately evident: she loves animals (and has a lot of them), she loves being outside, and if there's a minute to fill, she's doing something.

Shortly after posing for photographs with three of her 25 horses, which she breeds mainly to serve as her trusty companions for playing polo, Dix heads onto her porch, which overlooks a lush green lawn. Horse pastures and wheat fields sit beyond a weeping willow in the yard, and an albino miniature donkey named Puff the Magic Dragon can be seen nibbling near one of the fence lines.

One of her two dogs, Goose, quickly jumps up and insists on looking Dix right in the eyes, one paw on either shoulder of her perfectly white blouse. It's OK, Dix says, she's already on outfit change number four for the day, which isn't unusual as she switches hats from feeding horses to showing real estate properties to clients, to welcoming a reporter onto the porch for an afternoon chat.

A moment later, she excuses herself to take a quick call — she and her fiancé (land use attorney Allen "AT" Miller) need to check how many wedding invitations they can send for their small ceremony in September. She quickly calls her assistant to make sure they're on the same page.

"Gov. Inslee saved me from needing a reception!" Dix says with a laugh shortly after, noting that it would have likely been quite the event if not for pandemic regulations.

That's because Dix is a Spokane fixture, well known for her success in the real estate industry, but also for her true passions: conservation and polo. Though she grew up riding horses competitively, Dix didn't pick up polo until the age of 49. Since 2004, she has helped put on the Annual Cobra Polo Classic charity event that helps raise money for Ronald McDonald House Charities.

Indeed, Dix brushes off the importance of her real estate work in favor of highlighting her love of the outdoors, of riding and caring for horses, and of caring for the land.

"When people ask me what I do I say, 'I am a farmer and a conservationist, and I do real estate to afford the other two.' That's gonna be on my tombstone," she says.

Dix grew up in Spokane and moved onto what's now the family farm off South Farm Road 40 years ago, where she and her first husband raised their kids. At the time, the family had a doublewide on the property, but they later built a house. She notes the irony that even as she's made a living selling real estate, she's never bought a house for herself.

With several siblings and nephews living with their families on other properties along the same stretch of road, her farm is open for all manner of family events. Thanksgiving Day, for example, is a marathon of activity, with a family football game and then everyone rounding up horses for a midday ride.

"We're drinking whiskey as we ride out the door. It's a great tradition," Dix says. "We're not inside people, we're outdoor people."

Dix has done significant work to preserve those outdoors she loves so dearly, working on the board of the Dishman Hills Conservancy, where her real estate ties come in handy.

"I have been fortunate to have a lot of contact with a lot of the land that comes up around Dishman Hills," Dix says.

People will call her to sell their property, and she's been able to help hundreds of acres of that land be acquired for the conservancy instead of being sold off for development.

"We need trees for cleaning the air, we need trees for habitat. We need land, open space, to keep the air clean," Dix says. "We've got to do something to combat climate change."

Dix has also worked with the Nature Conservancy, a global environmental nonprofit that does conservation work backed by science, she says. In a video filmed for the nonprofit, Dix says she was interviewed about climate change and its impacts in the Inland Northwest. She discussed the devastating impacts of wildfires and smoke in particular.

"August has been a month that you plan to go away," Dix says. "With a lot of my clients who buy land, one of the first things I do is get them to take care of their land. Either have it thinned, or use different grants, which I use on my own farm for thinning."

Dix says she was one of three women of three ages interviewed for the video, and she asked where she fit into the mix with a pretty good idea she was the oldest.

"They're like, 'Well one's 18, one's like 40...' so I'm like, 'So I'm the old broad!'" Dix laughs. "It's great to be useful. That was something my parents really instilled in us growing up, is that we are very blessed and we should use that to give back."

"I would rather do that for two weeks than ever go to Hawaii or Mexico and lie on a beach. I don't even like to go to the lake for two days, it's too boring for me."

Indeed, on top of playing polo for different causes, donating her real estate commissions on her Dishman Hills Conservancy work back into the cause, and supporting candidates who want to do something about climate change, Dix has also traveled the world on medical missions. This February, she and Miller went to India as two of only a handful of non-medical volunteers helping surgeons coordinate care for children with cleft palettes, burns, and other serious injuries.

"I would rather do that for two weeks than ever go to Hawaii or Mexico and lie on a beach," Dix says. "I don't even like to go to the lake for two days, it's too boring for me."

As someone who never stops moving, it's probably no surprise she loves hiking. Just two days after this porch chat, she and Miller are set to go to Glacier National Park for a quick fall adventure. It was on a hike there last fall that Miller proposed. After getting married in late September, their fall agenda includes a trip back East to see the fall leaves change colors, with plenty of bicycling and hiking while they're there.

Even as she continues to get attention for her horses and real estate work, Dix says more than anything, she hopes her legacy is that she gave back and helped others.

The original print version of this article was headlined "giving Back"