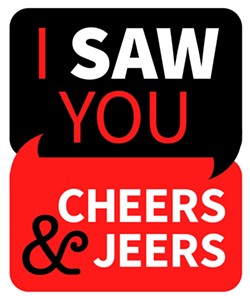 Hockey Playoffs Game 4 Gent: You - the mustache, the flannel, two kinds of gum, sitting in front of me with your friends. Me - the sassy hockey fan, getting closer and closer to you as the game progressed - so much so that I joked about sitting in your lap more than once and laughed 'with you' when you were being super cute. You touched my leg, and I haven't stopped thinking about it. I'd love an opportunity to flirt with you again. luckygulr@yahoo.com

Other Worldly at World Market: I saw you at World Market on Wednesday last week. You were wearing a sriracha T-shirt and your curly hair was pulled back in a bun. You had the most infectious laugh and your smile had me swooning. I hope I will see you there again.

To the wonderful first responder: On the morning of April 9th when my father suffered a heart attack while my sons and I were with him, you came to his apartment after he had been taken to the hospital to take my sons and I down to Sacred Heart but did not have room for my sons' car seats. Instead, you had us follow you to the gas station and completely filled up my empty gas tank. You have no idea what that gesture meant to me on such a hard day. I will always remember this act of kindness, and thank you for wishing my father well.

Re: Poke Me: Good point aimed at the wrong group of morons. Anti-vaxxers are afraid of the serum, not the stick. Your valid argument is better directed at all the tattooed people who do not donate blood because "they are scared of needles".

Meet for coffee: You and a friend asked to join me at my table at My Fresh Basket because all of the other tables were taken. You just have moved to Spokane from central Idaho to set up a business here. I left without asking your name but enjoyed our talk. In the unlikely event you read this, are you available to get together again?

You Gave a Puck! To the stand up gal that turned my smartphone in to Guest Services at the Chiefs vs Silvertips hockey game on Sat night April 13, after I left it in the toilet stall; thank you so very much and a thousand karma points to you! I had beaucoup valuables in the phone wallet and everything came back to me intact. See, I knew people are basically good!

Take the money and run: Last week I went to buy some bananas and on my way out, there was an employee who reached down and picked up a wad of 6 $100 bills. "It's your lucky day" I said to him as he reluctantly turned the money in as company policy. I keep walking out and found another wad of 6 $100 and was blown away. I panicked and turned the money in thinking I was doing the right thing. On my way home I thought about how much money I have lost and how Fred Meyer was going to have that money unless the drug dealer who dropped $1200 called in to claim it. So when I woke up the next morning I decided to call down and claim most of the money. I went down, collected the money, and ruined any good action I have done this year. The money is gone and I do feel bad, but a little bonus is always nice.

Re: Cheney Civil War Reenactment: Thanks for bringing up this issued as I had no idea it was going on, I then googled it. Frankly though I disagree with your opinion after reading their infor at www.spokanecivilwar.com & it looks very educational and a day filled of getting into the head space of what it was like for both sides and their medics, the soldiers spirituality and dilemmas of the whole situation. And being memorial weekend it is a time to remember our history. As a local Cheney resident and non student, I can say that the Cheney and surrounding farmers are very friendly and helpful. Pro slavery? Sounds like some identity politics to me and no we're not pro slavery. However, we do like history and you should check out the Cheney Museum on Main St. Frankly, the confederate flag/Battle Flag (look up flags at usflags.org) is part of the civil war as is the American flag, and if either one bothers you, then please stick to the EWU Campus or the Mason Jar where you'll be in your safe space. No one is forcing you to go to the civil war reenactment nor to engage in our towns delightful small town politics, history or culture. You're beliefs are your own and we all respect them to a point. So do us the same and respect that we allow historical accuracy and do not conform to the false righteous indignation of racist flags. I will fly my Blue Lives Matter, American and Israeli flags, you can fly your whatever flags. Thanks again for bringing up this event cause I'll attend if I can.

Snotty Girl: at Starbucks It's April 13th. It's very busy in the store, while everyone is doing their Easter shopping on this rainy Saturday. I'm eating my chicken, watching all the madness take place at this store and I see this Barista working very hard in the Freddy's Starbucks on Sullivan. He always works hard whenever I pop in and he's always polite to me and others that approach that confined coffee stand. And then YOU show up; a young skinny blonde girl, with glasses, lacking a jacket and looks as if you need a sandwich. But, judging by your parents well dressed appearance and attitude as if you're all royalty, I am pretty certain you are very well spoiled. The only thing you seem to lack is discipline and manners. I was pretty close by when I heard you demand a drink to be made. The Barista told you that he couldn't because the lack of ingredients, thus being unable to make your nasty drink; which was something made entirely of heavy cream and whatever the Keto culture orders these days. Instead of being understanding, you threw a little fit. You insisted other Starbucks make it and basically implied he was lying. But, he said he wasn't able to and gave you many valid reasons. You pulled the usual "You lost my business," crap, like most other whiny people do. And I am sure he doesn't care. I would not want you back myself if I was in his position, but I would also tell you off instead of being polite, like he was. What is also sad is that after you stormed off with mommy and daddy, the customer after you even commented how much of a brat you were. But what was worse, you showed you had a VERY low IQ by flipping Mr. Starbucks off. I was surprised your frail salad fingers could make gestures. Not long after, I was done with my meal and headed to grab a lotto ticket. I wanted to say something to the poor gentleman, but he was busy working with costumers. And not a few minutes later, lo and behold, your royal highness was complaining to costumer service about him and you even altered some things to make you sound like you were mistreated so badly. And then, when you were walking out the door, you giddily yelled "Bye Bye" as if you accomplished something by complaining. Well, you did... by looking stupid. Here is some word of advice to you, young lady: Get a job and get a life. You accomplished nothing. And to the parents of Ms. Entitled: Don't have kids, you suck at parenting. And lastly to you, Mr. Barista: Keep up the good work and hopefully you can find a better job. You have so much potential! ♦